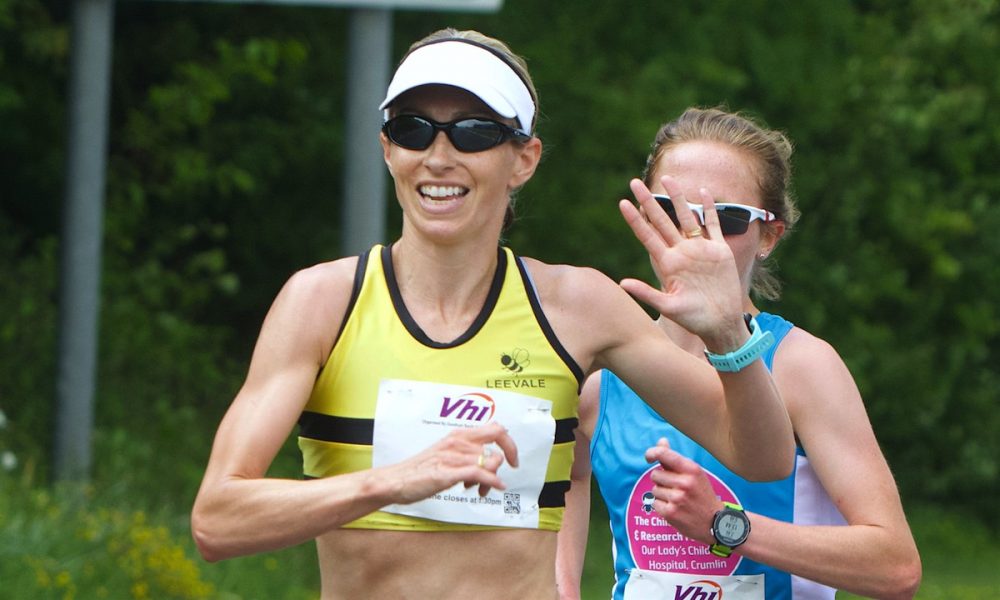 With restrictions slightly easing in Ireland, road racing was back with a bang over the last week. Although numbers were still restricted, it feels like great progress.

On Sunday (July 25), Leevale’s Ryan Creech was the winner of the Bob Burke 4-Mile held in Fermoy Co Cork – one of at least four road races that day held at venues all over the country.

Creech’s time of 19 minutes exactly put him half a minute clear of Ger Forde from Kilkenny City Harriers who finished in 15:31. Tim O’Donoghue from East Cork AC was a second behind for third and Niall Shahahan of An Bru AC a second behind again for fourth place. Shanahan was also first M40.

Back to strong 5k racing on the road

In Ferbane, Co Offaly, Mick Fogarty of host club Ferbane AC was the winner of the Hugo Smith Memorial 5km in 15 mins 30 secs. Andrew O’Brien from Kildare AC was second in 15:45 and Paul Buckley of Ferbane AC third and first M45 in 16:12.

Tenth overall, first woman and first over 50, man or woman, was the ageless Catherina McKiernan of Annalee AC in 17:35.

Eimear Dowling of Navan AC was second woman in 20:04 and Fiona Kenna of Drogheda and District AC third woman and first W40 in 20:14.

Taking place in Avondale Forest Park outside Rathdrum, Co Wicklow was the second round of the Wicklow 5km Series, where Jason Byrne finished well clear of the field in 17 mins 48 secs.

Ray Kenny was second and first M45 in 18:39 and Sheila O’Byrne third and first woman in 18:45. Winning the juvenile 1500m was Maria Zakharenko W14 of local club, Parnell AC. Three rounds remain in the series.

On Saturday (July 24), Galway’s east side was the venue for the Back to Business 5km, where the winner was Rory Chesser of Ennis TC in 15:21. Abaas Edris of Castlegar AC, who is originally from the Sudan, and started running in Ireland through the Sanctuary Runners group, was second in 15:41 with Ger Cuddy of Galway City Harriers third in 16:24.

The women’s race proved a thriller, with Deirdre Gibbons just beating her Galway City Harriers clubmate Kathryn Casserly. Gibbons won in 18:35 and Casserly a second behind. Third was Niamh Johnston of Naas AC in 20:18.

Not just track in Tokyo

With the qualifying rounds for the National Track and Field League cancelled, the fine new track at Carlow IT played host on Sunday (July 25) to a replacement meet called the Athletics Ireland Summer Games.

Ulster athlete Katie Kirk was a clear winner of the A grade women’s 800m at the Loughborough BMC Grand Prix on Saturday (June 24), where a large number of Irish athletes were in action.

In the men’s Grade A 1500m, Darragh McElhinney of UCD AC finished second in a personal best time of 3:42.14. Winning the C race in 3:45.45 was Jonathan Whan of Clonliffe Harriers. Letterkenny’s Danny Mooney clocked a time of 3:48.08 for eighth in the B race followed byMitchel Byrne of Rathfarnham WSAF AC, tenth in 3:50.41. In the D race, Mark Hanrahan of Ennis TC ran 3:49:30 for second place.

Mary Mulhare of Portlaoise and District won the 5000m at the fourth Dublin Graded Track and Field meeting held in Tallaght on Wednesday (July 21). Mulhare proved the class of the field with a time of 16 mins 58.94 secs.

Ger Forde of Kilkenny City Harrers was fastest in the mens’ grade A race, finishing in 15:05.20. Chasing him hard was Dylan Wright of Lucan Harriers who was less than half a second behind in 15:05.50. Brishan O’Brien of Tallaght AC was third in 15:17.80.