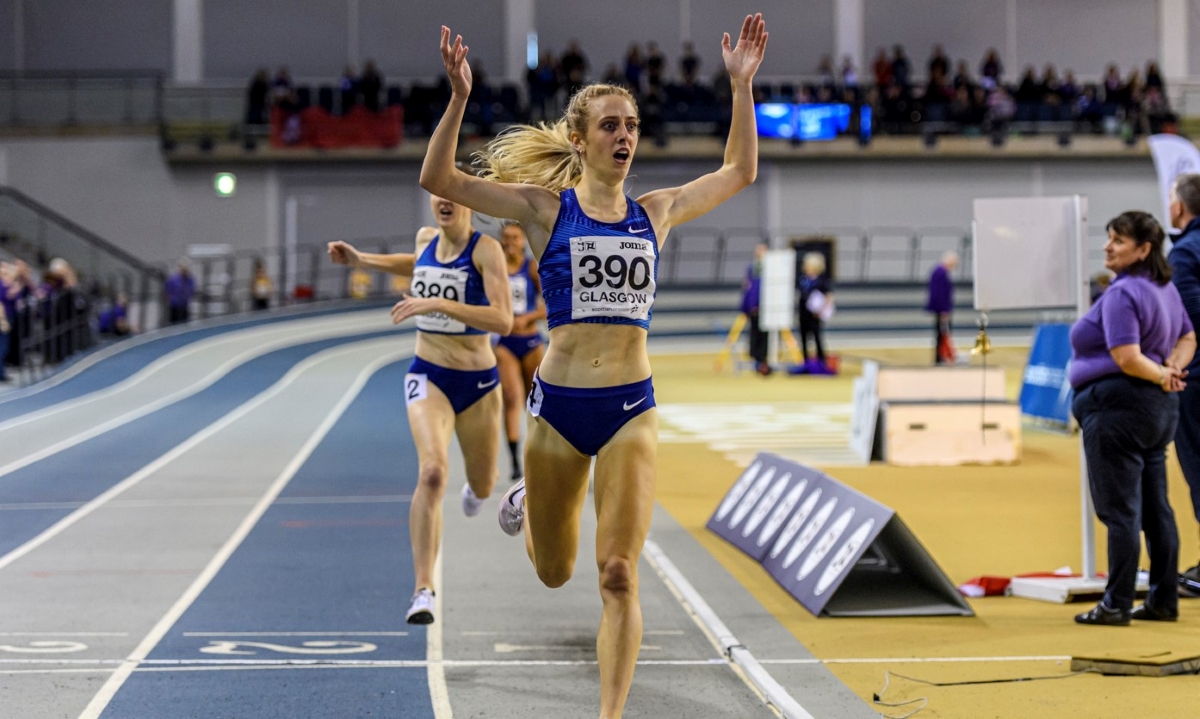 Our younger athletes were on fine form this weekend. It would be fair to say that Jemma Reekie stunned everyone (including, from her twitter, herself) when she ran 1:57.91 for 800m to take half a second off the British indoor record and beat Laura Muir in the process at an invitation women’s 800m race at Glasgow’s Emirates Arena. Laura Muir ran an indoor 800m PB herself of 1:58.44.

In Vienna Track & Field meet Tom Keen (Cambridge & Coleridge) set a new UK U20 indoor record when he ran 3:41.44 to place 3rd right behind his older team-mate Archie Davis who took was 2nd in 3:41.18. Keely Hodgkinson ensured that the ladies held the limelight in Austria too, clocking 2:01.16 and defeating not just the UK but the European indoor record for the women’s 800m. Finally, and despite reportedly taking a body blow from one of the pacers in his 800m race, Alex Botterill managed to hold his nerve and run a punchy indoor PB of 1:47.93. While not a ‘race’ (in case you hadn’t heard), it’s worth noting that the Welsh didn’t want to be left out of the record breaking, so Charlotte Arter ran a parkrun world best of 15:49 in Cardiff.

Revee Walcott-Nolan (800m) and Kieran Reilly (1500m) were competing for England at the Reykjavik International Games. We are awaiting times but we know Revee was a comfortable winner amd Kieran was 2nd.

In Holyrood Park, Edinburgh, at the BUCS Cross Country Championships university athletes were in action. Anna-Emilie Møller was never in any danger and retained her title in the 8k women’s race finishing in 28:03 for St Mary’s ahead of Jess Judd (28:49, Loughborough) in second. Fast10 member Jenny Nesbitt (29:22, Cardiff Met) was third. Those at the course tell us that Amelia Quirk was taken off for some medical treatment, so we hope she’s ok and wish her well. Fast Running’s own Hannah Irwin did Surrey proud, finishing in 13th place in 30:26. Loughborough took the women’s team title.

In the men’s 10k race it was Solent’s Mahamed Mahamed who ran a convincing victory in 28:37 to finish well ahead of Bangor’s Joe Steward (29:14) and Aston’s Jayme Rossiter (29:21). Despite not having a podium finisher, the overall performances were enough to ensure team gold was won by St Mary’s.

In the women’s short-race (6k) gold went to Grace Carson (Loughborough) in 22:06. Silver was also Loughborough’s thanks to Giorgia Chattwood (22:14) and Kate O’Neill nabbed bronze for Birmingham in 22:19. St Mary’s took the 1-2 in the men’s short-race (8k) with Joe Wigfield first home in 26:43 and Alex Ediker following him up in 26:48. Loughborough grabbed the final podium spot though as Thomas Patrick came third in 26:54. Anna Moller on her way to a convincing victory at the BUCS XC. Credit: Callum Gillett

Hawkins and Purdue race in Japan

While they may still be youngsters, Charlotte Purdue and Callum Hawkins can fairly be described as being on the more experienced end of their sport these days. Both were in action at the Marugame Half Marathon in Japan this weekend and both proved that their training is on fire at the moment. These two will be ones to watch in London and Tokyo for sure. Purdue ran a massive 1 minute and 22 seconds faster than last year to take 2nd place in 68:23 behind Helalia Johannes of Namibia. It is Hawkins though that tugged at our heartstrings, running 60:01 to place 3rd. So close to sub 60 Callum, so close! He ran a gutsy race, taking it out on his own terms and digging in at the end to get that tantalising time. Also out to check in on her training this weekend was Lily Partridge who was due to run one of the Murcia Marathon races as part of her long run. We’ll keep an eye out and let you know as soon as the results are published.

Elsewhere in Spain the England Athletics squad were racing at the Granollers Half Marathon. In a competition that saw all the England ladies place within the top 10, Lucy Reid took second in 1:14:01 with just one spot between her and Jenny Spink who was fourth in 14:53, Alison Lavender was 6th in 1:16:45 and Katie White eighth in 1:18:26. For the men, Mohamud Aadan (TVH) placed sevent in 1:03:32 and Josh Lunn (Bedford and County) was 11th in 1:07:13.

The Alsager 5 hosted the first England Athletics Road Championships of 2020. Beth Potter took the debut win of the year with over a minute to spare, running 25:34. Elsey Whyman-Davis was testing the speed in her legs as she builds towards the London Marathon and bagged second place in 26:44 ahead of Kate Holt in 26:58 and another marathoner, Elinor Kirk, who took 4th in 27:51.

It was Omar Ahmed of Birchfield Harriers who took the men’s premier placing in a slightly closer race, though still with room to breathe. Ahmed finished in 23:25 with Emile Cairess (Leeds City AC) shortly behind him in 23:46. In what would have been a winning time last year, Johnny Mellor kept the top three all under 24 with his third-place time of 23:55.

More from the roads around the UK

The Dewsbury 10k kicked off Chris Parr’s racing year with a win for the Morpeth Harriers athlete, breaking the tape in 29:57. Altrincham & District AC’s Muhammad Abu-Rezeq was second in 30:11 and Joe Sagar of Spenborough & District AC took third in 30:45. Sharon Barlow of Harrogate Harriers was winning woman in a time of 34:45 which was nearly a 1 minute PB. Julie Briscoe was runner up in 35:01 and Alice Leake third in 35:05.

At the Chicester 10k it was Nick Goolab who took the honour of first past the post in what looks to have been quite the battle for podium places. In a race where 30 minutes was only good enough for eighth, Goolab managed to bring it home with a safe 10 second lead in the end to finish in 29:01. Ben Bradley and Owen Hind were placed second and third respectively despite having the exact same finishing time of 29:11 and Charlie Hulson was right on their tails for fourth place in 29:14. Norwich’s Danni Nimmock was given a good race but took the win in 33:58 despite being chased home by clubmate Sarah Astin (34:12) and Southampton AC’s Laura Brenton (34:14). The undulating course of the Watford Half Marathon is always a good challenge and a favourite for those looking to test fitness in the earlier stages of their marathon buildups. After the race was cancelled in 2019 due to unsafe conditions on the course Paul Martelletti and Rachel Felton were both back to see if they could retain their crowns from 2018. It was not to be though and both were toppled by new challengers to the gold-spot. Martelletti was held off to second place by a 1:07:29 from Hercules Wimbledon’s Jonathan Cornish who looks to be having a rather promising start to 2020 after running a 10k PB just two weeks ago. Martelletti settled for runner up in 1:10:10 and Chris Oddy took third place in 1:10:57. Annabel Gummow of Winchester and District made her Watford Half debut with a winning 1:14:50, leaving Rachel Felton to take second in 1:18:10 and Sophie Delderfield took third in 1:19:59. Though not traditionally a PB course, that didn’t deter Harrow AC’s Lucy Ashe who took 4th in 1:21:02, a 2 minute 45 second best.

At the Serpentine RC Last Friday of the Month 5k their own runner Jonathan Poole held off a fast field to take the win in 14:57 and Herne Hill’s Julia Wedmore won the women’s race in 18:21.

A new month means also means the next race in the QEOP Winter 10k series and it was Sam Wardle (Horwich RMI) who took the February top spot in 33:31. In second place was Oliver Knight (St Albans Striders) in 35:18 and in third was Alex Douglas with 36:22. In the women’s race, St Alban’s Striders’ Katie Tebutt ran 36:24 for the win, followed by Cy Cano of Trent Park RC in 39:57 and Julia Grant in 40:19.

Youthful talent won out at the Ashford and District 10k as U20 Charlie Bisley charged home in 31:45. With a bit of an age difference, his nearest challenger was the V40 Adrian Musset who placed second in 33:11 and Harrison Tremain was third in 34:00. Laura Archer was first female in 43:16.