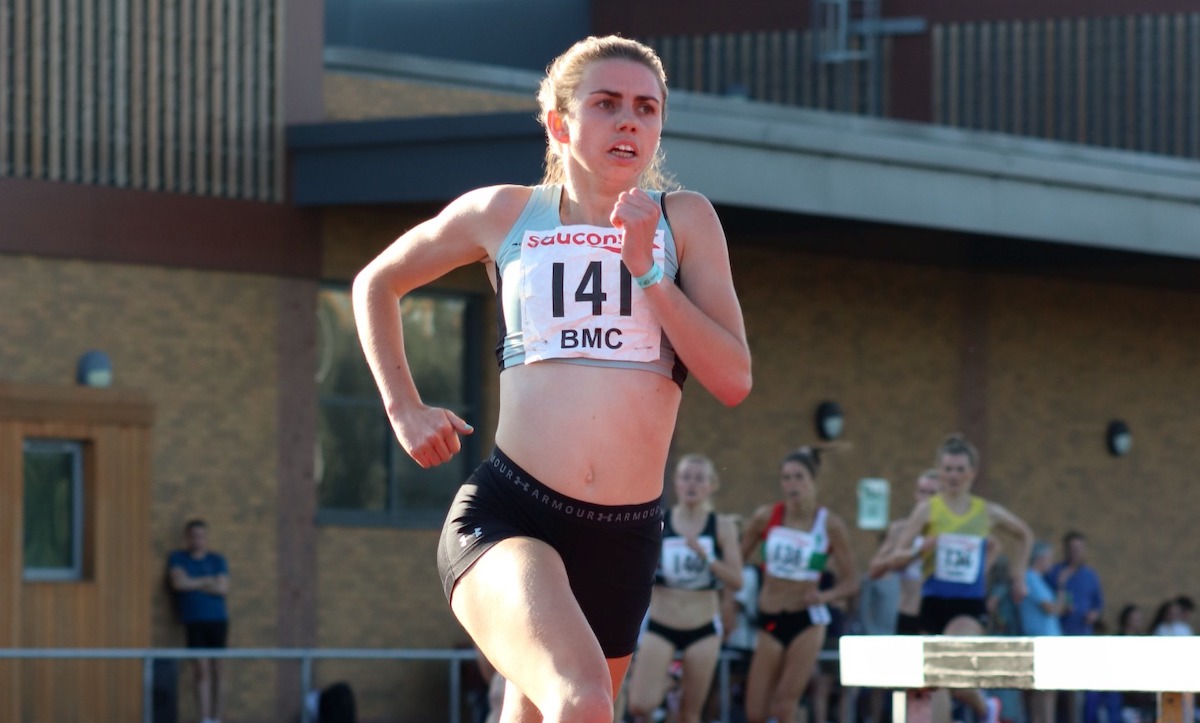 A record breaking weekend for Irish athletes, with Shanahan and Casey shining bright. Lindie Naughton reports on the full weekend of action.

Louise Shanahan of Leevale AC broke the Irish women’s record when running a time of 1:59.42 to win the 800m at the Irish Milers Club promotion held at the Mary Peters Track, Belfast, on (Saturday, May 14).

The time betters the 1:59.69 run by Ciara Mageean in July 2020, when she became the first Irishwoman to break two minutes for 800m.

Mageean, of the New Balance team Manchester, was in action in Belfast, finishing a fighting second behind Shanahan in 1:59.86. Emerald AC’s Jenna Bromell was third in 2:02.22.

In the 1500m, Nick Griggs of Mid-Ulster AC, who has been breaking Irish junior records all round him for the past year, had to be content with second continued to push the boundaries when he just failed to catch Ethan Hussey of Leeds City AC. Hussey won the race in 3:42.53 with Griggs second in 3:42.98. Highgate a hotspot of PBs once again

Casey’s winning time of 28 mins 57.32 secs in the sixth race knocked over 26 seconds off the 29:23.92 time run by Abdel Laadjel of Donore Harriers in late March. That time had broken Frank Greally’s record of 30 mins 17 secs, set in Santry over forty-one years earlier in August 1970, which is now well and truly broken.

Also on the programme were two high quality miles and in the women’s Millicent Fawcett Mile, Sarah Healy of UCD AC had to be content with second place behind the Australian Georgia Griffith. Healy’s time was 4:29.03. Finishing fifth in 4:32.24 was Georgie Hartigan of Dundrum South Dublin AC.

In the Emsley Carr Mile, Andrew Coscoran of Star of the Sea AC ran under four minutes for a ninth time when finishing third in 3:55.31.Paul Robinson of St Coca’s AC was seventh in 3:57.88 and junior athlete Luke McCann from Mid-Ulster AC tenth in 3:59.83.

Hannah Irwin of Cambridge and Coleridge AC, who declared for Northern Ireland last year, finished fifth in the UKA Championships 10,000m in 32:25.34. Efrem Gidey of Clonliffe Harriers stretched his current winning streak with victory at the Irish Runner 5-Mile held in Dublin’s Phoenix Park on Sunday (May 14).

Gidey’s time of 13 mins 51 secs, put him well clear of Dunboyne AC’s Peter Somba in 14.33, while third in 14:41 was Rory O’Connor of North Cork AC. Clonliffe Harriers were first team, comfortably ahead of Crusaders AC and Rathfarnham WSAF AC. Clonliffe was also first of the M35 teams, with Inishowen AC from Donegal best in the M50 class.

Also on Sunday, Kyle Doherty of City of Derry Spartans was the winner of the Lifford-Strabane Half Marathon in 71 mins 40 secs.A distance second and first M45 in 73:12 was Seamus Somers of Sligo AC.

A total of 865 completed the race, making it the biggest on the island of Ireland over the weekend.

Master athlete Brian Maher of Kilkenny City Harriers was a clear winner of the Stoneyford 10km in 30 mins 50 secs. Caoilte Malone was first woman in 409:26. Winners of the 5km were James Ledingham in 16:17 and Ciara Deely in 20:42. Back in winning form at the Drumlin 10km in Co Monaghan was Yared Derese of Carrick Aces in 31 mins 39 secs. First woman in 40:26 was Sinead Ward of Letterkenny AC.

Winning the Michal Rejmer 10-Mile at Limerick Race Course was Michael McMahon with the top nine men all over 40. Tenth and first woman in 62:26 was Siobhan O’Doherty of Borrisoleigh AC.

Peter Somba of Dunboyne AC, back in Ireland after a two year break led home over 300 finishers when winning the Simon Cumbers Navan 6km on Friday (May 13).

First woman and fourth overall was Catherina Mullen of Metro St Brigid’s AC in 20:29.Claire Ní Fhaircheallaigh of Dunboyne AC was second in 23:13.

Barry Keane of Waterford AC won the 10,000m in a time of at 29:27.12 at the BIG EAST Outdoor Championships on Friday (May 13).It was a third consecutive victory for Keane at this event. Evan Byrne of Togher AC, his team mate at Butler University, finished right behind him for second place in 29:29.26.

In the women’s race, Orla O’Connor of Waterford AC finished third in 35:37.07 for Providence College.

At the PAC-12 Meet which began on Friday (May 13) and continued until Sunday, Raheny Shamrock AC’s Brian Fay won the steeplechase in a time of 8:32.37 on Saturday evening. * Although we don’t normally cover shorter distances in fastrunning.com, Rhasidat Adeleke of Tallaght AC was certainly running fast when she broke Joanne Cuddihy’s long-standing Irish 400m record with a time of 50.70 secs at the Big 12 Meet in Lubbock, Texas on Sunday. Adeleke finished third in the race.

Rathfarnham Runners ended seven years of domination by TT Racers when they won the 19th Wicklow Way Relay, making a welcome return to the calendar after a two-year absence.

The format remained the same, with teams started their preparations earlier in the year and nervous moments before their entry was accepted, with only 35 teams of eight runners given a coveted place on the start line.

Word this year was that TT races, based on Terry McConnon’s training group in Trinity College, was aiming to break the course record of 7 hrs 17 mins for the 105km course with 3,900m of climb.

For the first time, each team was given a tracking device and for the first three legs, TT Racers and Rathfarnham were swapping the lead at the front, although the team from East Cork AC was not too far off the pace. All changed on the fourth leg into Glendalough when Niall Lynch, an experienced WWR campaigner, became seriously dehydrated and collapsed within a few hundred metres of the changeover area. His team mate Ronan Dunphy picked up the tracer, but TT Racers were now out, although the rest of the team would make it all the way to Shillelagh.

East Cork was making steady progress with Tim O’Donoghue on the penultimate leg of 22km moving away from the Rathfarnham team captain David Power and completing the leg in an estimated time of 72 mins 30 secs. Only the 10km leg from Cross Bridge was to come and a heroic run from Laura McDonnell pulled Rathfarnham back in the lead and gave them victory in a time of 7 hrs 26 mins 7 secs.

East Cork AC finished second in 7:35.34 and Ticknock Titans third in 8:14.0. Behind them came thirty other teams whose only ambition was to arrive in Shillelagh, ideally before dark. They did it!