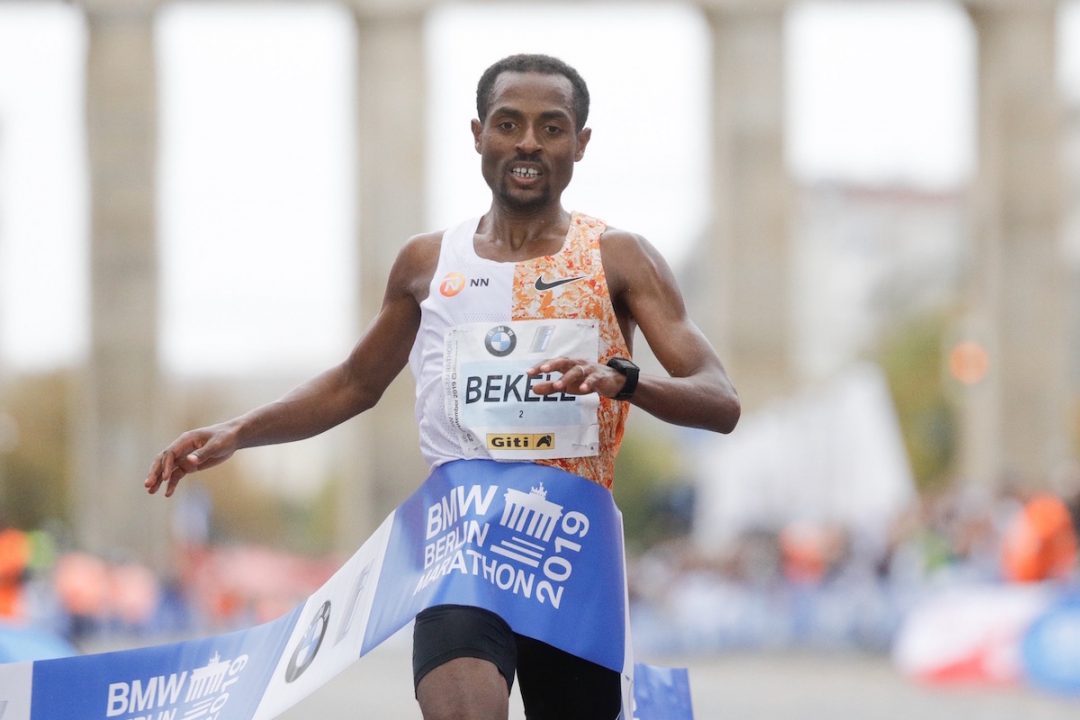 Mellor and Lavendar lead the way for a great weekend in Berlin, but there is heartbreak for Purdue, Jones, Burtchart, Sharp and Hughes at the World Athletics Championships.

Understandably the spotlight for this race and indeed the headlines for the weekend will be on the fact that Kenenisa Bekele came within a whisker of breaking the world record at Berlin Marathon, running a tantalising 2:01:49 so be two seconds of Eliud Kipchoge’s mark set last year.

Shortly after 30km Bekele dropped off the pace and a few kilometres later Legese broke away from Lemma. But then Bekele recovered although he was around 100 metres adrift. First he overtook Lemma then between 37 and 38 kilometres he went past the leader Legese. Kenenisa Bekele ran so fast in this part of the race that breaking the world record came within reach. Ultimately he missed it for the second time in his career by mere seconds.

“I knew that I was in top form although my preparation was shorter than I would have hoped. I know I can run faster,” said Kenenisa Bekele.

However, it’s not just nearly-world-record-breakers that can run personal bests in the German rain. This year’s Berlin marathon gave some fantastic results for GB and IRL athletes.

Jonny Mellor of Liverpool Harriers came 16th overall with 2:12:29 and takes home with him both the honour of being first GB finisher and a 28 second PB . For Ireland, Kevin Seaward also ran a chunky PB for a 2:13:39 and the word on the street is that he didn’t even wear those swanky shoes with the big tick on them. Respect.

Cardiff AC’s Matthew Clowes was next for GB with a 2:13:57 and 25th place to show for it. Before the race he had a 2:43:16 PB, so I guess we can assume that he hadn’t really tested himself on the marathon until now. [Oh we think London Marathon was a test for Matt last year – Ed.]

Third for GB was taken by Scott Overall (Bromley Harriers AC) in 2:14:40. Behind him were Jonathan Thewlis (Notts AC), another one to run a PB in 2:15:52 and Adam Hickey (Southend Athletic) who made an impressive debut 2:16:59.

In the women’s race, Tracy Barlow sadly had to pull out before the 35k mark. That left it to Alison Lavender of Oswestry Olympians to bring it home for GB in a whopping 13 minute PB of 2:41:18. PB’s continued with both Fiona Brian (Metro Aberdeen, 2:42:51) and Tracy Millmore of Birtley AC (2:47:10) running comfortable bests.

Not much to report back from Doha

We’d love to be able to report on the British results from the marathon at the World Athletics Championships in Doha but was can’t. Tish Jones had to pull out before the race due to injury and Charlotte Purdue made the decision not to finish the race in conditions which were not working for her. So, we’ll let you make up your own mind about the merits of a race which resulted in a 41% DNF rate.

Elsewhere in the championships there was even more to discuss as Lynsey Sharp made a shock early exit from the women’s 800m competition and Andy Butchart had a roller-coster ride of a night, being told he’d got a spot in the 5,000m final before having it taken away again after Jakob Ingebrisen was DQ’d and then reinstated.

Steph Twell ran a gutsy but lonely race in the women’s 10,000m which was somewhat owned by Nike Oregan project’s Sifan Hassan, who astonishingly broke four minutes for the final 1500m of the race. Twell finished in 15th in 31:44.79 starting strongly, but ended up falling between packs and had to fight to the finish on her own.

Afterwards Twell commented “It picked up after 5k and I knew it was going to be a fast second half. I didn’t quite have the sharper legs that I used to have for the 1500m and 5k to be able to hold onto a pace and in four weeks’ time I have a marathon so I am in a very different champs prep.”

At the Great Scottish Run Gemma Steel was in action over 10k and won a solid victory in 35:29 ahead of Inverclyde’s Nynke Mullholland who ran 36:46 for second place and Edinburgh triathlete Alison Rowatt who was third in 36:58.

In the men’s race it was a local win for Victoria Park AAC Glasgow’s thanks to Max Milarvie who finished in 30:50 with Richard Mair some way behind in 31:17 and Thomas Cornthwaite sneaking in with a 31:59 for third.

Rapid half marathon times in the women’s race.

The Half Marathon was a more global affair. Edith Chelimo of Kenya won in a new course record of 1:07:38 which is also a season’s best for her after she ran a 1:07:56 in Houston in January this year. Compatriot Nancy Kiprop was second in 1:09:24, but only just, because Askale Merachi of Ethiopia was hot on her tail and finished with a big 2 min PB and a time of 1:09:34.

It was Uganda that took the top spot for the men. Timothy Torotich broke the tape in 1:01:29 almost a minute ahead of his closest rival, Micha Kogo of Kenya (1:02:28).

Again, the third place wasn’t far behind and this time it was in the form of up and coming talent Stephen Kiprop (Kenya). The 19 year old won the Ras Al Khaimah Half Marathon earlier in the year in 58:42 and claimed bronze in this race with a 1:02:32. Alas, England’s Chris Thompson couldn’t manage a third title and finished 7th in 1:05:33.

Despite forboding forecasts, runners were treated to pretty fair conditions at the ever popular Ealing Half Marathon. Over 7,000 took to the start line and it was Serpentine’s Jonathan Poole who was first over the finish line to retain his title in 1:10:14.

Last year he was chased all the way to the finish line by Paul Martelleti, so this one was a little more comfortable for him with a slower time and a bigger margin. Just over 30 seconds behind Poole was Alex Bampton of Highgate Harriers (1:10:49), but he had to race it all the way to the end to keep Nick Besson from making it a Serpentine 1-2. In the end Bampton won out leaving Besson to take third in 1:10:52 For the ladies, the title couldn’t be retained and a new champion was crowned – Lucie Custance of Clapham Chasers, who won in 1:19:03. Last year’s winner, VP & TH AC’s Rachel Thomas comments on her Strava that she wanted to stop after 3 miles. So, perhaps coming second and in a time that was faster than her winning one last year isn’t really a bad result when 10 of the 13 miles were being run under duress! She finished in 1:19:36. Third place went to Jenni Ball (WSEH AC) in 1:21:03.

Team mates until the gun goes off

It was a rather successful weekend for the AB training group down in Sussex . The team’s Instagram shows that they took all three podium spots at the Barns Green Half Marathon.

Photo: Provided by Paul Navesey. Nice to see the boys had synchronised outfits.

Paul Navesey took the win in 68:25 as he continues his preparation for the Frankfurt Marathon and we look forward to hearing about the race in his next blog on that journey. “I had a good race with Ben [Savill] in the first half” said the Crawley AC man.

Halves around the UK

Half Marathon’s were clearly the popular distance this weekend as runners in Salisbury and Nottingham also had 13.1 on their minds.

Avon Valley’s Holly Rush was in action at this Wiltshire race and bagged herself a win in 1:23:41. Local lady Sian Thomas (City of Salisbury AC) finished next in 1:24:07 and Chippenham Harriers’ Emma Haines took third in 1:26:33.

Peter Baksh was speediest in the men’s race and represented Beckenham RC well with his 1:09:57 victory. He nudged out Stephen Blake of Woking AC who was a mere seven seconds behind him in 1:10:04. Aaron Wilson was third gent back in 1:13:18.

Gideon Kipsang of 1Zero1 added a 10k win to his Belfast Half vitictory from earlier this year as he ran a 30:15  to be crowned champion at the  Bangor 10K (Inc NI & Ulster Championship). Declan Reed of Derry AC Spartans was second in 30:57 and Conan McCaughey of North Belfast Harriers kept the top three sub-31 with a third place time of 30:58. Emma Mitchell of Clonliffe Harriers was first lady in 34:44. Gladys Ganiel of North Belfast Harriers was next in 36:33 with Lauren Wilson making the journey from Edinburgh AC to take the third podium spot in 37:11.

For a full review check out the North Down AC race report here.

At the Stoneybeck 10k, a 33:23 was enough for the win for  Eden Runners Jonathan Cox to beat his clubmate Robin Regan by four seconds (33:27).While Eden Runners dominated the race, Keswick AC managed to hold them off the third place thanks to Sam Stead and his 34:33.

It was a similar story in the women’s race as Eden runners Emma Neilsen and Karen Bridge took first and second in 41:59 and 42:45 respectively. Unattached athlete Tudy Beetham was third in 44:10.

In Taunton at their 10k,  Alice Murray-Gourlay kept her home crowd happy with a 37:17 win ahead of Julie Dixon (Bideford AC 38:44) and Louise Gentry (Teignbridge Trotters 40:33).

Teignbridge were the winners for the men thanks to Jamie Barnett and his 34:42 but Taunton AC came to take the rest of the podium space – Phil Burden and Ben Tull ran 33:33 and 33:56.

In the world of ultra running plenty took on the classic race that runs 153 miles from Athens to Sparta. It was fine day for running long without the wild storms of recent years and super high temperatures of other years. That’s not to say it was cold but low 30’s seemed to be the peak.

Scottish runner Alastair Higgins had an excellent run in 25:48 for fourth overall, closely followed by Ian Hammet in 26:15 for sixth. Peter Jackson was third Brit in 28:59 for 16th and friend of Fast Running Paul Radford (pictured below) had a storming run of 29:46 for 21st place. Paul Radford, supported by friend Ben Cox, running the final steps to kiss the foot of King Leonidas, the famous finish of the 153 mile race.

UK’s Sarah Sawyer was fourth lady in 30:39 and showed excellent pace judgement after a conservative start saw her fly through the field in the second half.

Lucie Custance and Jack Gray are your fastest athletes at UK parkruns this weekend (September 28th). Custance was also busy on Sunday racing over half marathon and winning, as mentioned above.