Back to the races 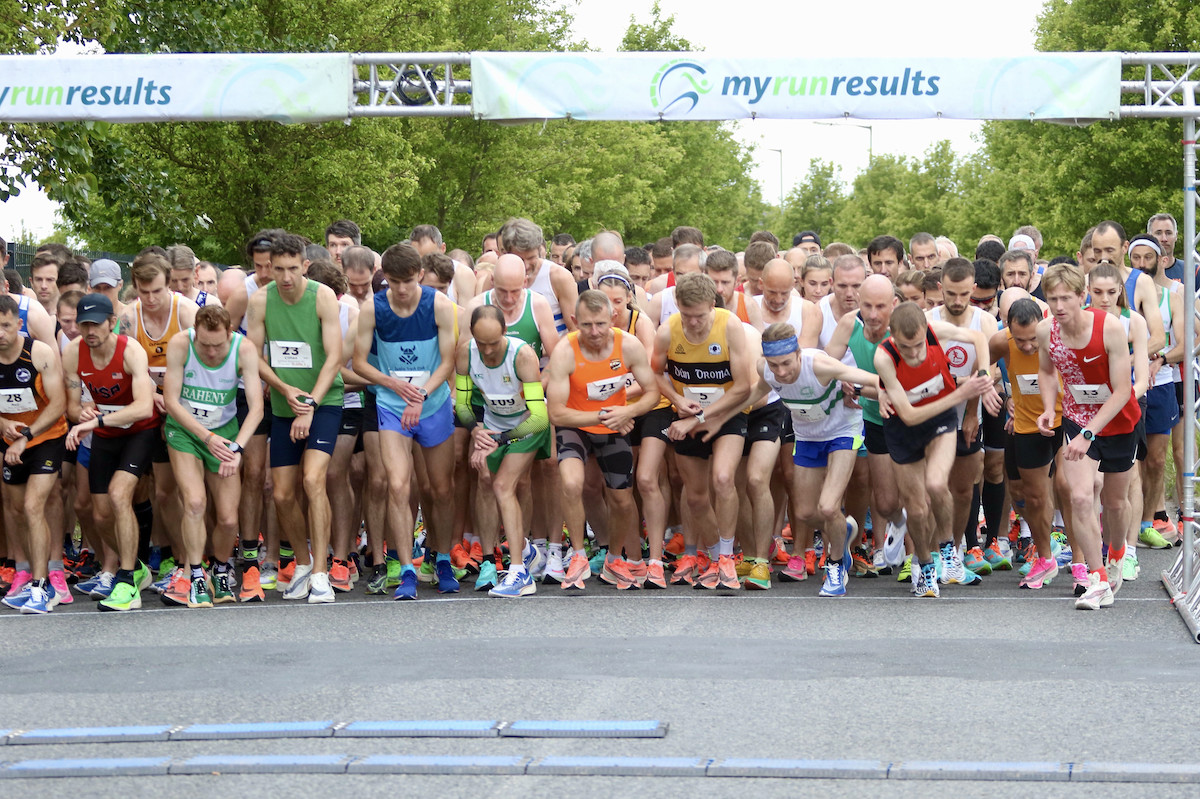 Photos: Lindie Naughton and Will Roberts (The Spine Race)

We’re happy to have our writers back in their natural habitats, with Lindie Naughton and James Rhodes both trackside watching and taking photos of athletics. Lindie reports back this weekend’s Irish action.

Road racing like it used to be returned to the town of Kilcock on Friday evening (25 June), when 200 stood on the start line for the annual St Coca’s 5km.

Close to 2,000 had applied for the limited places on offer and they came from all over the country to run, proudly wearing club singlets mothballed for the past 16 months.

Winner was Evan Fitzgerald from Clonmel AC in Co Tipperary who broke away from the pack in the closing stages of the race  and crossed the line in 14 mins 53. Six seconds behind in 14 mins 59 secs was Mick Fogarty of Ferbane AC, who was also first M40. In third place Wiktorski of Bray Runners was so delighted to be back racing that he  returned his cash prize to the race organisers.

First of the women was Lizzie Lee of Leevale AC. Lee had travelled from Cork with her father for the race and finished a clear winner in 15 mins 53 secs.

In second place was Maria McCambridge of Dundrum South Dublin AC, an athlete who’s had her fair share of injuries and other setbacks over the past few years. McCambridge had won the 3000m at the Dublin Graded Meet two days earlier, breaking the women’s over 45 record with her time  of 10:06.12. She was delighted to finish her first road race race in over  five years with a time of 15 mins 5 secs.  Finishing third in 17:12 was Noreen Brouder of Sportsowrld AC.  All three women are over 40. Making it a home win in the men’s junior category was Eoin Richards of St Coca’s AC in 15:21.

More of the same please race organises. It can be done!

Two road races took place in Northern Ireland on the same evening.  In Belfast, Steven McAlary of City of Derry Spartans AC and Gemma McDonald from Ballycastle Runners were the winners of the Les Jones Memorial 5km held  at the Mary Peters track.

McAlary finished in 15 mins 22 secs; Ricky Johnston of Jog Lisburn RC  was second in 15:44 and Stephen Wylie of Annadale Striders third in 16:26. McDonald’s time was 20:01, with Aoibheann Clinton and Mary Slocum, both of  Ward Park Runners, second  and third in times of 21:10 and 21:16 respectively. A total of 169 completed the race.

Eskra, in Co Tyrone, was the venue for  the final round of the Paul Murray 5km Series where  Gavin Corey of Strive Racing made it a full house of four wins finishing in 15 minutes 24 secs.  Andrew Newell of Sperrin Harriers was second in 16:10 and Ryan Pritchard of Omagh Harriers third in 16:17.

Fourth and first M40 was Stevie McKenna of  host club Knockmanny RC in 16:28. First U16 was Conor Moran of Mid-Ulster AC who was sixth overall in 16.32 – his fastest time of the series. First  U16 woman was Eimear McCarroll of Loreto Omagh who was also first woman overall in 18:37. Sinead Donnelly of Keep ‘Er Lit was second in 18:51 and Grainne O’Hagan of  Knockmanny RC third in 19:06.  Fourth and first W40 was Ciara Lynch also of Knockmanny RC, in 19:11.

Overall winners of the series were Gavin Corey  and  Eimear McCarroll.

Winners of the Lifford Strabane 10km on Sunday (June 27) were Dermot McElchar of Finn Valley AC  and Claire McGuigan of the host club, Lifford Strabane. McElchar finished in 32 mins 47 seconds, with Matthew McLaughlin second in 33:11 and Marty Lynch a close third in 33.15. All three were over 40.  Fifth and first M50 was the ageless Pauric McKinney  in 34:04.

Close finishes to the men’s 1500m and 800m finals added fireworks to the virtually spectator-free t Athletics Ireland Track and Field Championships held from Friday to Sunday at Santry (June 25-27).

In a thrilling end to a tactical men’s 1500m on Saturday afternoon, Cathal Doyle of  Clonliffe Harriers came within a whisker of catching Andrew Coscoran of Star of the Sea AC when he began a determined chase for the line with 100m to go.

Even closer was the men’s 800m, where John Fitzsimons of Kildare AC caught early leader Luke McCann of UCD AC on the line. After careful examination of the photo-finish, the pair were given times of 1:49.48 and 1:49.51. Third was Cillian Kirwan of Raheny Shamrock AC in 1:49.67.

Winning a closely fought women’s 800m was Louise Shanahan of Leevale AC, with Siofra Cleirigh Buttner passing her Dundrum South Dublin club-mate Georgie Hartigan for second place. The trio’s times were 2:03.62, 2:03.84 and 2:03.94. Buttner is now ranked 47th in the Road to Tokyo rankings, with 48 places on offer. Hartigan is ranked 49th. From the start of  the men’s 5000m, Hiko Tonosa of Dundrum South Dublin AC  swapped the lead with Sean Tobin of Clonmel AC.

Tonosa had won the 5000m title in 2019, while in 2020, Tobin had famously finished a close second in the 1500m  and then won the 10,000m a week later. On a day of blustery winds,  the pair soon pulled away from a pack of seven athletes, led initially by Efrem Gidey of Clonliffe Harriers and later by Conor Bradley of City of Derry Spartans AC.

A break from Tonosa with about 300m to go proved decisive and he pulled away from Tobin to win in a time of 13:52.53. Tobin was second in 13:54.92 with Neil Johnston of Annadale Striders winning the battle for third place in 14:21.91 after passing Bradley.

First senior title for Fay, but seventh for Finn

In the men’s steeplechase, Brian Fay of Raheny Shamrock AC, who currently tops the rankings,  took his first senior men’s s title in 8:52.88.

In second place, a time of 8:56.57 for Finley Daly of Sligo AC was inside the A standard for the European U23 Championships.  Third and fourth were previous champions Adam Kirk Smith of Derry TC and Jayme Rossiter of Clonliffe Harriers.

Michelle Finn of Leevale AC took a seventh national title since 2012 in the women’s steeplechase, and improved her own championships record to 9 mins 36.94 secs. Eilish Flanagan of Carmen AC was second in 9:46.52 and former champion Kerry O’Flaherty of Newcastle and District AC third in 10:40.87. Finn later went on to finish fourth in the women’s 1500m; as she had done in 2020.

At the True Athletes Classic Meet in Leverkusen, Germany,  on Sunday (June 27), Mark English of Letterkenny AC finished third in the men’s 800m with a time of 1:45.51. English had hoped to run a time of under 1:45.20 which is the automatic Olympic qualifying mark. He had run a season’s best of 1:45.22 in Madrid last weekend, putting him 47th on the Road to Tokyo rankings with 48 places on offer in the men’s 800m.

The qualification period for the Tokyo Olympics ends on Tuesday. Irish international ultra runner Eoin Keith not only won the Summer Spine Race,  which started on Saturday June 19, but set a new course record of 77 hours 34 mins 53 secs for the 429 km (268 miles) course.

Keith, Cork born but living in Dublin,  is a previous winner of the winter Spine Race, considered one of he toughest in the world. He has also finished second three times, most recently in 2020. The 2021 winter race was cancelled because of ongoing lockdowns.

After starting with 79 others from Edale in the Peak District, Keith  arrived in Kirk Yetholm  in the Scottish Borders on Tuesday (June 22)  knocking 29 minutes off  Mark Denby’s record.

Only after he had negotiated 220 miles did Keith realise he could possibly break the summer course record. “I’d heard the numbers, but I just thought, no way, I just want to finish by Wednesday,” he said.

He described racing along the Pennine Way in summer rather than winter as ‘a joy in comparison’. His best winter time is 95 hrs 17 mins.  In 2019, Keith finished second in the Winter Spine behind Jasmin Paris, who set a new course record of 83:12:23. It was the first time a woman had ever won the race outright.