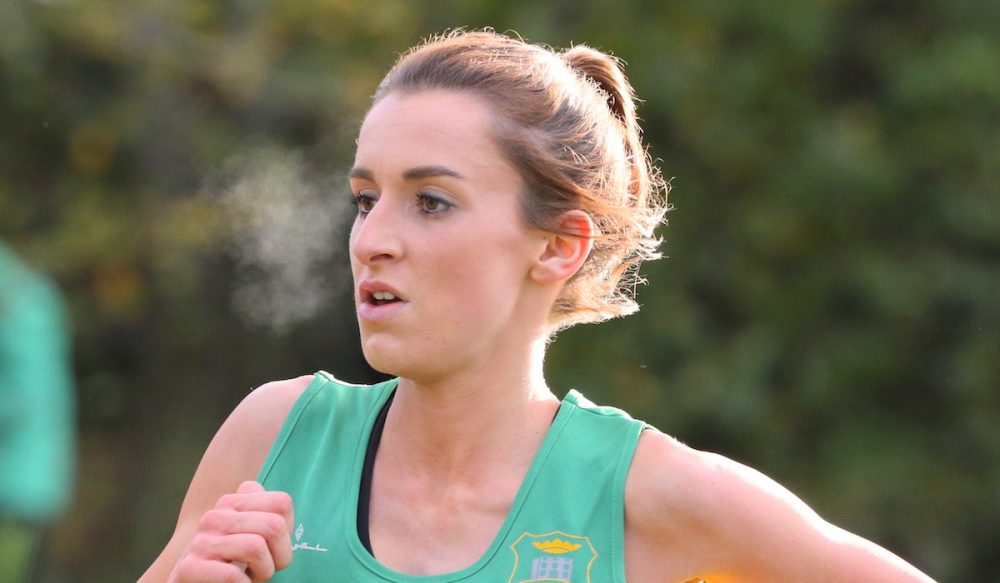 Shona Heaslip, Hugh Armstrong and teenager Sarah Healy were among the Irish athletes to impress on the track, while Hiko Tonosa and Kerry O’Flaherty won on the trails.

Shona Heaslip of Riocht ran a 10,000m personal best of 32:56 in wet conditions at the Galway County Championships on Thursday evening (June 14). Her time met the standard for the European Championships in August, but because it was achieved in a mixed race it will most likely not be recognised as a qualifying time unless it meets the IAAF rules for mixed 5000m and 10,000m races.

At the Le Cheile International in Leixlip on Saturday (June 16) USA-based Hugh Armstrong of Ballina AC made a welcome return to domestic competition when he won the men’s 3000m race. Armstrong’s time of 8:27.65 saw him finish clear of Paul O’Donnell from Dundrum South Dublin AC who clocked a time of 8:28.47. A close third in 8:28.86 was Pierre Murchan of Dublin City Harriers making a welcome return to racing. Clonmel’s Kevin Mansell finished fourth in 8:30.0.

The first junior was Efrem Gidey of Clonliffe Harriers who was seventh in 8:41.5. A day later, Gidey won the U18 3000m at the Dublin Juvenile Track and Field Championships in Tallaght.

Over 400m, Dara Kervick of Clonliffe Harriers won the A race in 48.48, with Ferrybank’s Paul Murphy second in 48.64. British visitor Holly Turner won the women’s race in 54.88. In a closely fought 100m, Andrew Robertson of Sale Harriers beat Travane Morrison, the American student based in Tralee. Their times were 10.75 and 10.76 respectively.

Claire Mooney of UCD AC ran a career best of 2:02.82 when finishing eighth in a quality 800m at the Internationales Soundtrack Meeting in Tubingen, Germany on Saturday (June 16). Her time was just off the European Championships B standard of 2:02.50.

At the same meet, Ciara Mageean finished fourth in a blanket finish to the women’s 1500m. Just over half a second separated the top five with Mageean given a time of 4:06.70 – a season’s best. Behind her, Sarah Healy of Blackrock finished 11th in 4:09.25 – a time which not only smashed her own Irish U18 record, but is a European Senior Championships B qualifying mark, and the second fastest time by a European U18 athlete. More about Healy’s performance can be found here.

The fastest U18 European in 32 years!

17 year-old Sarah Healy smashed not only the Irish U18 1500m record but is now the second fastest European youth of all-time!https://t.co/XVwY3zCVNQ

Thomas Barr ran the anchor leg for the Irish men’s 4 x 400 team that clocked a time of 3:08.15 for sixth place at the Citius Track and Field Meet in Berne, Switzerland on Saturday (June 16). Making up the team were Chris O’Donnell, Brandon Arrey and Andrew Mellon.

Hopes are high that both teams will maintain their top 16 places and qualify for the European Championships in Berlin, which is less than two months away.

There’s also hope for an Irish women’s 4 x 100m team, currently 12th in the rankings, with times of 44.15 for Oordegem last month and 44.31 from last season. The men’s 4 x100m team lies 26th in the rankings, but hasn’t produced any significant times so far this season and would need to break 40 seconds twice to break into the top 16.

Next up for the Irish relay squads are Diamond League invitations for both men and women’s senior 4 x 100m squads to the London Anniversary Games and for the senior women’s 4x100m squad to Lausanne.

In Berne, the relay squad members also ran individual races. Over 200m, Barr ran a time of 21.58 for third in one race, while Chris O’Donnell of Grange AC was fourth in 21.75 in another. In the elite 200m, Leon Reid of Menapians AC finished fifth in 20.68.

Cliodhna Manning of Kilkenny City Harriers finished third in 24.25 in one women’s 200m race, while Catherine McManus of Dublin City Harriers was second in 24.75 and Sophie Becker of St Joseph’s AC third in 24.89 in another race.

Sommer Lecky of Finn Valley AC won the U20 women’s high jump title at the England Athletics U20 and U23 Championships in Bedford on Sunday (June 17). Her 1.84m jump is her second inside the World Junior Championships B standard of 1.82m. In the women’s U23 hammer, Michael Walsh of Swinford AC came out on top with a record-breaking throw of 64.22m, which restores her to the top of the Irish rankings.

Hiko Tonosa of Dundrum South Dublin AC not only raced away from the field to win the Braveheart Trail 5km in Trim Co Meath on Friday evening (June 15), he obliterated the course record with a stunning time of 14:38. That time put him over a minute clear of the chasers led by Peter Somba of Dunboyne AC. Somba finished in 15:44 – also a good time for a far from flat race held on grass tracks and trails beside the river Boyne. It means that Tonosa has won all five rounds of the KIA Road Racing Series to date. Third of the men was Conan McCaughey in 15:50.

The first woman and also a course record breaker was Olympic steeplechaser Kerry O’Flaherty of Newcastle and District AC who finished eighth overall in 16:40. A close second was Laura Shaughnessy of DSD in 16:48. Donore’s Sinead Lambe was third in 18:24.

Winning the Ballinagar 10km on the same evening was Mick Fogarty of Ferbane AC in 33:47. The first woman was Aisling O’Connor of Edenderry AC in 37:31.

The first woman was Catherina McKiernan of Annalee AC, who finished 12th overall in 17:51. Ashley Ryan of Civil Service Harriers was second in 18:02 and Karla Doran of Donore Harriers third in 19:51.

Gareth McGinley and Jill Hodgins were the winners of the Grant Thornton Team Corporate 5km in Cork on Wednesday (June 13). McGinley finished in 16:47, with Hodgins fourth overall in 17:19.

In Co Tipperary, David Mansfield of Clonmel AC was the winner of the Michael Cahill 5km in 15:23. William Stephens of Coolquill AC was second in 15:48 with John Fitzgibbon of Thurles Crokes a close third in 15:50. The first woman was Grace Reilly of Portlaoise AC in 19:02.

Tony McCambridge not only finished tenth but led Northern Ireland to fourth place of 14 teams at the World Mountain Running International Youth Cup in Lanzada, Italy on Saturday (June 16).

McCambridge’s time of 21:18, put him just over a minute behind race winner Matthew Mackey of England who finished in 20:10. Making up the Northern Irish team were Conall McClean 16th, Jared Martin 28th and Gareth Campbell 44th. Top three teams were England, on just eight points, followed by France and Italy on 18 and 36 points respectively.

Best of the Republic of Ireland team was Luke Maher in 33rd place, while inn the girls’ race Aoife Coffey finished 19th.

Olympic steeplechaser Sara Treacy of Dunboyne AC ran a season’s best 4:25.46 for sixth in the women’s A race. UCD’s Ellie Hartnett was eighth in 4:27.47.

Paul Byrne of St Abban’s finished third in the 400m hurdles in 51.32 at the Motonet GP Espoo in Finland last Wednesday (June 13). In the 110m hurdles, Ben Reynolds of North Down clocked 13.97 for second place behind local athlete Elmo Lakka in 13.72, while in the women’s 3000m steeplechase, Kerry O’Flaherty of Newcastle and District AC was sixth in 10:18.36.

Germany-based Sean Roth of Dundrum South Dublin set a new Irish U23 record of 5.10 for the pole vault at a meet in Soest, Germany on Sunday, June 10.

Irish mountain running international Sarah McCormack of Clonliffe Harriers returned to the track on June 10 to run a time of 16:46.47 at the Northern Athletics Championships in Sportcity, Manchester.