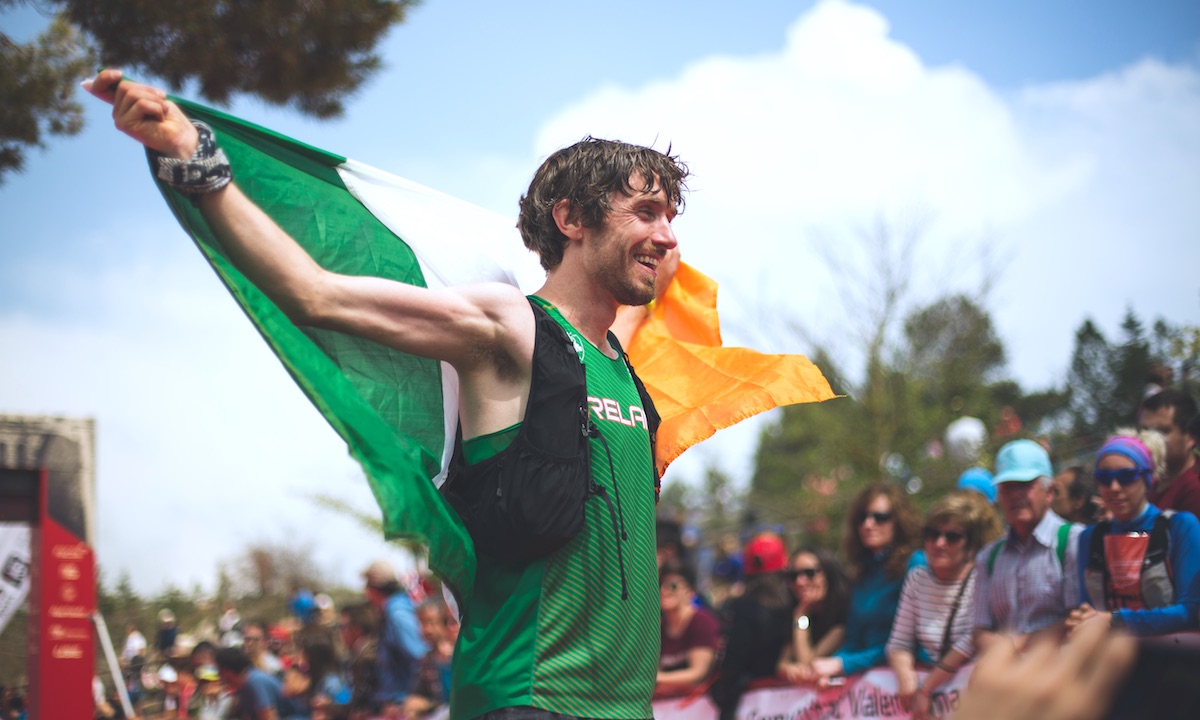 Photo: Paddy O'Leary was first Irish finisher at the UTMB

Gideon Kimosop of 1ZERO1 Athletes was the winner of the Waterside Half Marathon in Derry on Sunday (September 1).

Kimosop, a regular visitor to Ireland for the past four years, raced away to victory in 66:43. For second place, Kyle Doherty of City of Derry Spartans just outpaced his club mate Declan Reed with the pair timed at 68:34 and 68:35. Reid was first M45.

First woman in 16th place overall was Ann Marie McGlynn of Letterkenny AC in 76:58 – faster that her winning time of 77:21 from 2014. Sinead Lambe of Donore Harriers was second in 82:53 and Gemma McDonald of Ballycastle third in 87:06. In the team competition, Foyle Valley AC, with four in the top seven, proved best of the men, beating City of Derry Spartans. Spartans had the consolation of finishing first in the women’s category. A total of 1,442 completed the race.

In Belfast, also on Sunday, John Black of North Belfast Harriers and Emma Mitchell, Clonliffe Harriers newest recruit, were the winners of the Laganside 10km in Belfast. Full results here.

Hiko Tonosa of Dundrum South Dublin AC made the trip to Cork on Saturday (August 31) where he came out on top in the John Buckley Sports 10-Mile with a time of 49:57.

Finishing a close second was Jonathan Escalante-Phillips of Cambridge and Coleridge AC in 50:09, with Tim O’Donoghue of East Cork AC third in 50:41. First woman was Jill Hodgins of Leevale AC in 59:26. National half marathon champion Angela McCann of Clonmel AC was second in 59:38 with Claire O’Brien of Watergrasshill AC a distant third.

Escalante-Phillips was a busy athlete, running four races in as many days. On Thursday evening, he won the Portmarnock 5 mile in 25:04. Next up was the Tara 5km on Friday evening where again he was the winner in 16:17.

On Sunday, he was back in Leinster and proved the class of the field when winning the Boyne 5km in Drogheda in a time of 15:18. A distant second in 16.37 was Ruarcan O Gibne of Ace AC in 16.37. First woman was Amy Bulman of Willowfield Harriers in 19:25. In Portmarnock. Colm Rooney of Clonliffe Harriers was four seconds behind for second place, while Raheny’s Kate Purcell was first woman, while in Tara, Laura McvDonnell of Tallaght AC was first woman in 18: 15

On a congested weekend of fixtures, Freddy Sittuk and Aisling O’Connor were the winners of the Tullamore Half Marathon on Saturday (August 31).

Sittuk, currently resident in the Wexford area, was a clear winner of the race in 68:31. Local athlete Liam Brady of Tullamore Harriers was second in 70:20 and Stephen Conroy of Celbridge AC third in 71.27.

O’Connor was first woman in 80:20, with her Edenderry AC clubmate Caroline Donnellan second and first W40 in 82:51 and Dunleer AC’s Karen Costello third in 84:57. Fourth and first W50 was Olympian Pauline Curley in 85:19. She was also leading Tullamore Harriers to team victory over Dunleer AC and Ferbane AC.

First M40 was Paul Buckley of Ferbane AC in 73.08. Brendan Donagher of Naomh Mhuire AC was first M50 in 78:47 and Barry Potts of Donore Harriers first M60 in 93:54. Tullamore Harriers were first men’s team, finishing comfortably ahead of Ferbane AC and Newbridge AC.

Gareth Lyons of North Belfast Harriers and Catherine O’Connor of East Down AC were the winners at the Ards 5-mile on Saturday (August 31). Lyons finished in 28 mins 14 secs, with O’Connor clocking 30:42.

Sean Doran of C& E Products raced away from the field for victory in the Pfizer BHAA 5km on Wednesday (August 28) in Grange Castle, Dublin.

Doran’s time of 15 mins 36 secs saw him finish over a minute clear of Phelim Glynn of Eir who was first M55 in 16:46. Third in 16:55 was Cyril Cuddy of host club Pfizer, with his team finishing first of the grade A teams ahead of Eir. First woman was Lynn Hennessy in 18:35. Luke Whelan O’Loughlin of Pfizer was second and first W40 in 19:48 and Grainne Butler third and first W55 in 20.22, with Butler leading the Health Group to team victory. With no teams in grade B, Eir won the C grade while ESB was best in D. 50km on the flat and all the way around Mont Blanc

Caitriona Jennings of Letterkenny AC finished seventh in a new Irish record of 3 hrs 19 mins 49 secs at the World 50km Championships in Brasov, Romania on Saturday (August 31). Finishing 46th in 3 hrs 16 mins was Raivis Zakis of West Waterford AC who was representing his native Latvia.

Best of the Irish at the Ultra Trail de Mont Blanc in and around Chamonix, France, was Paddy O’Leary who finished 41st in 26 hours 5 mins 54 secs for the 171.6km distance in his first attempt at this most daunting of off road running challenges.

Finishing 52nd and 3rd M50 in 27 hours 17 mins on Saturday evening was Eoin Keith of Sportsworld AC in Dublin, who was delighted to complete the race after three DNFs in the past three attempts.

“That went well. Managed to hit my targets, and finishing in a respectable time. Overall I was 52nd, which in a field with way more than 100 elite athletes is pretty good. I was delighted to manage to get on the podium as third in my old old man age category. The UTMB podium is a special place to be!” Keith wrote on his FB page.

Fast Running’s Robbie Britton saw Keith in a sprint finish through the streets of Chamonix in the final miles and said “the sheer determination Eoin was showing in the final push of such a long race was inspirational. It just showed that competitive spirit that has seen Eoin win races and set records across so many years.”

Over the 146.9m TDS distance (with over 9,000m of climb), Gavin Byrne finished 31st in 22 hours 57 mins 22 secs. Byrne suffered with stomach issues in the early stages, but showed his ever growing experience by moving through the field over the entire race even if the hills “weren’t built for Irish lads”.

In the shorter 56.2km race, which took place earlier in the week, Irish international mountain runner Eoin Lennon finished 45th in 6 hrs 23 mins 17 secs. Finishing 170th and 26th woman in 7:50.13 was Nicola Duncan who, like Lennon, is a member of the Carnethy club in Scotland.

Moving towards Doha on the track

Thomas Barr of Ferrybank AC finished sixth in the 400m hurdles at the Diamond League final in Zurich on Thursday (August 29) in his second fastest time of the season.

Ahead of him, Karsten Warholm with a sensational time of 46.91 secs not only extended his unbeaten run of 2019 but ran the second fastest time ever – a time only bettered by the American Kevin Young who ran 46.78 at the 1992 Barcelona Olympics.

At ISTAF Berlin on Sunday (September 1), Michele Finn of Leevale AC clocked a personal best and national record time of 6:16.67 when finishing seventh in a high quality 2000m steeplechase.

On Friday evening at the Tonbridge Twilight Invitational in England, (August 30), Mark English of UCD AC continued his preparations for  the World Championships by winning the 800m in 1:45.98 – just off the Doha automatic qualifying mark of 1:45.80. A close second in 1:46.08 was Spender Thomas.