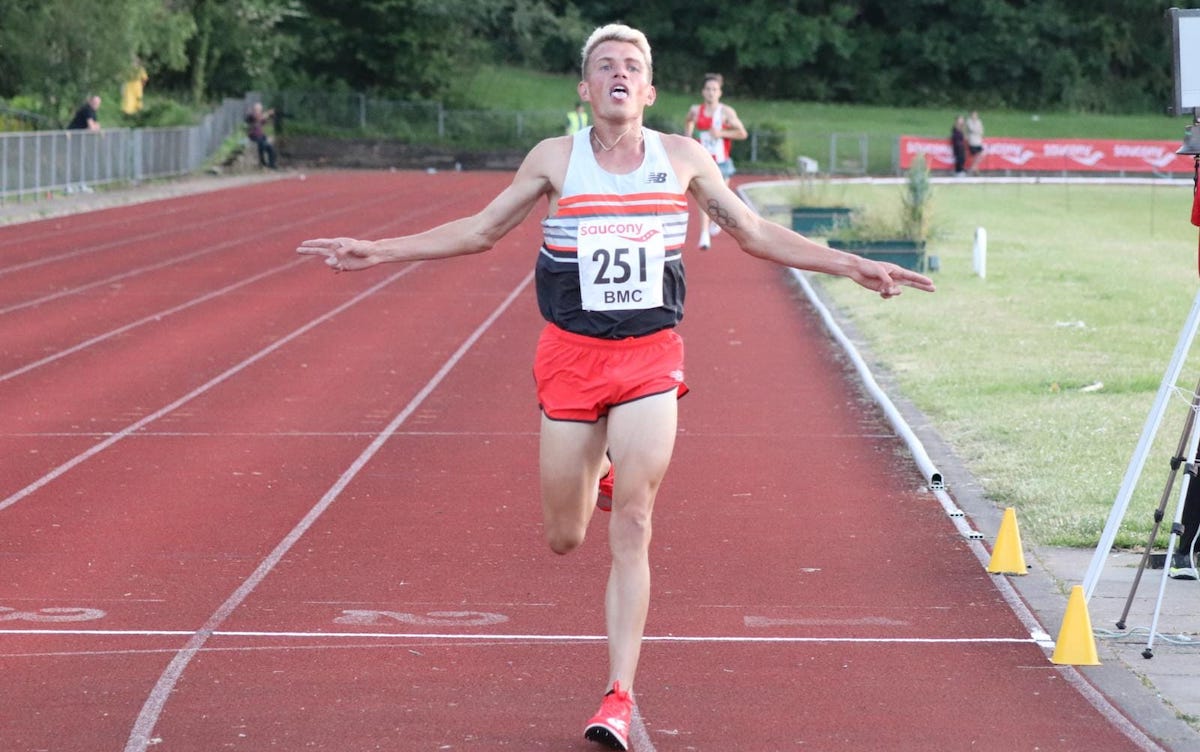 The women’s 10000m world record was beaten twice in three days this week. Almaz Ayana’s 29:17.45 record was astounding to start with but when Sifan Hassan ran 20:06.82 to take 10 over seconds off it at the Fanny Blankers-Koen Games last Sunday, you could be forgiven for thinking that the new record would stand for a while. Not so. Just days later at the same stadium in Hengelo the Ethiopian Olympic Trials took place and Letesenbet Gidey sliced another five seconds off the record, running 29:01.03. Gidey dominated the race in which she lapped everyone except the second placer. She now holds the world records for both 10000 and 5000m (16:06.62).

The 5000m trial also saw athletes go 5th, 6th and 8th on the all-time rankings. There’s clearly something about that track! We’ll soon see what Hassan makes of the Gateshead track as British Athletics announce this week that she’ll run in the Diamond league there next month. She’ll be competing over the mile – will she be looking to break her own World Record of 4:12.33? You’d have to hope so!

The week started in an exciting way when Patrick Dever won the NCAA 10,000m final in Eugene with a stunning performance. A fast pace set by Kenyan Wesley Kiptoo which looked potentially suicidal but a huge pack stuck with it. Six athletes were still in the running with 200m to go but Patrick Dever absolutely smashed the last 50 meters to finish in a winning time of 27:41.87. That puts him 15th all time in Britain and is a huge 46 seconds faster than his existing PB.

At the Meeting International de Nice Revee Walcott-Nolan ran a PB of 4:06.28 to place second in the 1500m and in the mens 1500m George Mills was seventh in 3:37.00. Earlier in the week Mills had been at the WA Continental Tour Bronze meet in Prague and ran a 3:36.42 for fourth place.

Back to our results from Nice though – Eilish McColgan was racing again, running herself a 5,000m second place finish in a time of 14:55.79. She now has the Olympic qualifying time for 1500, 5000 and 10,000! In the men’s 5000m it was great to see Jonny Davies clocking a fine 13:21.56, a performance hat has gone under the radar a bit this week but which was a near 10 second PB for the former European u/23 XC Champion. Mark Pearce was in action in the chase running a big PB of 8:25.43, another athlete coached by Luke Gunn delivering top results.

Elsewhere in France this week, Melissa Courtney-Bryant ran 4:16.64 for sixth place over 1500m at the Meeting Pro Athlé Tour de Marseille. Archie Davis was over in Denmark at the Copenhagen Athletics Games and it was worth the trip, as he came away with the 1500m win in 3:38.49. Josh Lay also made the podium, placing third in 3:40.38

Back on home soil

You could be forgiven for thinking that all top-flight track racing roads lead to Birmingham at the moment, and there’s good reason for that with such a great setup there, but one fast British race not taking place in Birmingham this week was the Saucony British Milers’ Club Grand Prix in Watford. Scottish U23 Erin Wallace took four seconds off her PB to run 4:08.10 and take a clear win over the seniors in her 1500m race. Holly Archer was runner up in 4:09.13 and Jess Judd who paced the race out at the start, continued to finish third in 4:12.29

In the men’s race the U23s were on top again taking their Euro U/23 qualification opportunity as Matthew Stonier broke the tape in 3:39.17 followed by Tiuarnan Crorkern in 3:39.41. Senior James McMurray and John Howarth tied for third place in 3:39.85.

Andy Butchart put in a strong contender for performance of the night, setting a BMC record over 3000m to win his race in 7:43.57, beating Jack Rowe’s PB run of 7:49.71 and Darragh McElhinny with 8:10.86. With only four in the race, Butchart ran a good chunk of the effort on his own, which makes it even more impressive. The event also saw Fast Running’s own James Rhodes in action over 800m. He kept up his amazing PB streak with a 2:07.13 – nice one! Oh and of course he was still taking photos too!

Club comps around the country

The North East Masters AA League in Jarrow had a huge amount of 1500m races available for all abilities. Over the course of the event it was David France (v40) who ran fastest of the Men in 4:23.6 and Stephanie Maclean Dann topped the women’s times in 5:01.0.

The Thames Valley Harriers Open made use of Wormwood scrubs before the BMC headed there later in the week. Catherine Allen won overall in the senior 1500m, running 5:08.24. Archie Smith was second in 5:08.31 – a PB for the U15 athlete. He narrowly beat fellow U15 Louis Moore who ran 5:08.32.

Kicking us off with the 10k road results is the Eshott Flyer Super Fast 10k which took place in Morpeth. Sunderland’s Craig Gunn was victorious in 34:08. Morpeth Harriers kept it local for second and third place thanks to John Butters with a time of 34:37 and Rich Johnson running 35:41. V60 Fiona Matheson of Falkirk won the women’s race in 39:29.

Run Through’s Chase the Sun 10k/5k Olympic Park edition saw John Payne and Alice Bamber bagged themselves a winner’s vouchers finish times of 32:45 and 40:25 respectively over 10k. Over the shorter distance the men’s podium all went sub 17 – Dan Collins winning in 16:16 to beat Dave Edwards (16:45) and James Perkins (16:58). Josephine Hall and Bettina Urlbauer unknowingly battled it out in the women’s race, finishing twenty seconds apart from the gun, but only two seconds by chip, with Josphine winning the battle in 19:04.

There were a range of distances available at Run Dorney yesterday. In the 5k Mark Parker topped the men’s rankings in 18:06 and Rebecca Fawcett was fastest woman in 21:32. Over 10k it was Sam Amend who won the 10k in what for her is a relatively pedestrian time of 39:17 -that’s after a recent 100 mile track world record, a win at the NDW 50 mile race a couple of weeks ago. Perhaps it was to celebrate her selection for team GB (see below).

In the Half Marathon Melissah Gibson continued in her return to racing as she took the win in 1:23:23 – over three minutes clear of her nearest rival. Stephen Blake was first in the men’s rankings with 1:11:13. Steph Twell also ran the race in a time of 73:34 but wasn’t included in the final results. She mentioned on social media that she was running a workout at the race and by going under 74:00 she should meet the British Athletics criteria for proving fitness ahead of the Olympics.

RunThrough Cheltenham Running Festival also offered three distances. The 5k was won by Chloe Finlay in 19:12 and William Trew in 17:10. Over 10k it was Aled Jenkins who was home first in 33:50 and Hermione Green in 40:53 for the women. Finally, the Half Marathon was won by Aaron Edwards in 1:06:32 and Grace Wilkinson in 1:22:13.

Weymouth Half Marathon was won by Wayne Loveridge in 1:13:38 with Sarah Hollingworth the fastest woman on chip time with 1:25:44 beating Angela Avey’s 1:25:34. We’re not sure whether the race was conventionally organised or if it was a rolling start so we’ll let you decide who was the winner there!

It was a hot day and night and next day to be out running and hundo, but that didn’t stop those taking part in the Centurion SDW 100. Peter Windoross took the lead in the final fews miles to win in 15:30:16 – his second victory over the distance.

Good news for the masses and some less good news for the elites this week. Parkrun, which we all feared was due to push back and back, will restart on June the 26th. However, it’s sad (though completely understandable) to hear from UKA that they will not be able to send a team to the 2021 World Athletics U20 Championships in Kenya in August. This is due to “the significant cost and time required in quarantine both in Kenya and UK, but most importantly the wellbeing of our athletes, coaches and support team”. All the qualifiers will be taken to the European U20 Championships in Tallin, Estonia in July.

Another key announcement which came from British Athletics this week was, as mentioned above, the selection for the IAU 24 World Championships. The team will consist of amantha Amend (Norman Wilson, Belgrave)

GB Athletes went to be kitted out in their Olympic kit this week at the NEC. James has started a series of previews which you can read *here* – it’s wonderful to see their excitement. We know it’s all about the Euro’s at the moment, but we can’t help but prefer watching people run without a ball at their feet!
(note: Yes we know there’s room to love both)

A new Flying Finn in Turku
Swede joy for Coscoran