Another busy weekend of Irish action 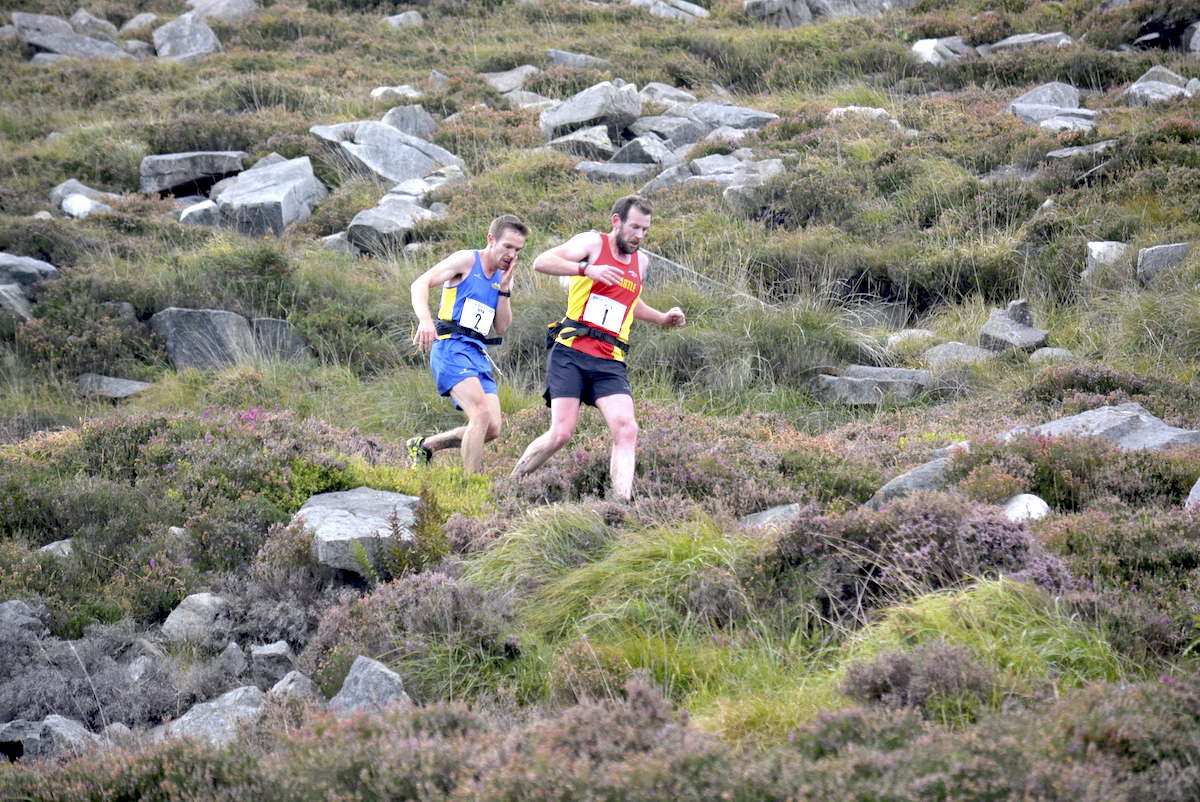 Back and forth racing on Slieve Donard.

Plenty of events took place during the week and this weekend, with Lindie Naughton on call to bring the results to the Fast Running readers as usual.

Joe Warne of Doheny AC was the winner of a competitive MyRunClub Race Series 5km, with Drogheda and District AC, held at Newtownsallaban, Drogheda on Sunday (September 27).

Warne finished in 15 mins 19 secs, ten seconds ahead of junior athlete Ruarcan O Gibne of Ace AC who finished in 15:29. Indeed junior athletes took three of the top four places, with Michael Murphy from Tullamore Harriers, just holding off the challenge of Aaron Smith from Cilles AC for third place; their times were 15:37 and 15:40 respectively. Fifth and first M35 was Karl Nolan of Clonliffe Harriers in 16:08.

Aoibhinn McGoldrick of Raheny Shamrock AC, another junior athlete, was first woman in 17:39, with Edel Gaffney of Trim AC second in 17:45 and Mary Leech of the host club Drogheda and District AC third and first W45 in 17:47.

In a second race, junior athlete Tony McCambridge from St Malachy’s AC was the winner in an even faster time of 15 mins 15 secs, followed by Declan Toal of North East Runners in 15:48, and Callum Morgan, another junior from St Malachy’s, in 15:51. World W55 record holder Anne Gilshinan of Slaney Olympic was first woman in 18:35.

A clear winner of the 5km at the Champion Chip Ireland Running Series Event 6 at Shane’s Castle in Co Antrim on Saturday (September 26) was James Hamilton of Ballymena Runners who finished in 15 mins 46 secs.

Second in 16:12 was Peter Gracey of Beechmount Harriers, while third in 16:20 was Adrian Scullion of Knockmany. Eighth overall and first woman was Grace Carson in 16:59. Emer McKee of Willowfield Harriers in 18:04 and Aine Hughes in 18:55 were second and third.

Elizabeth Carr of Mullingar Harriers led home the women in 38:55, followed by Gemma McDonald of Ballycastle Runners in 39:20 and Kelda Gibson of Convoy AC in 40:03. Back in action after a long period of injury was the veteran Cathy McCourt who finished fifth woman and first W45 in 41:33.

Winners of the half marathon were Iain Taggart in 76:48 and Karen Alexander in 84:46, while first home in the marathon were Rowan Griffin of Magherafelt Harriers in 2:43.40 and Fiona McFall of Jog Lisburn RC in 3:134.50. The final round in this well-received series takes place at Down Royal on October 10.

In Rathdrum, on Thursday evening (September 24) junior athlete Joe Byrne of SBR AC in Co Wexford was a clear winner of the MyRunClub 5km Series at Avondale House in 16 mins 34 secs. Derek Crammond of Parnell AC was second in 17:05 and Paul Gary Duffy of Inbhear Dee AC a close third in 17.08. In fourth place, Myles Gibbons of SBR AC was first M45 in 17.18, while finishing sixth and first M60 was Mick Byrne of Parnell AC in 17.47. David McGlynn of Waterford AC was a convincing winner of the men’s race at the annual West Waterford AC open cross-country, held in the grounds of St Augustine’s College, Dungarvan on Sunday (September 27).

McGlynn, who finished in 26 mins 1 sec, was followed home by Pat Hennessy of host club West Waterford in 26:29, with Noel Murphy of Waterford AC third in 27:53. With four finishers in the top six, Waterford AC were clear winners of the team prize, ahead of West Waterford AC and Ferrybank AC.

Making it a Waterford AC double in the women’s race was Ruth Heery who had a clear win in 14: 37. Ferrybank AC pair Louise Morgan in 15:56 and Orna Murray in 16:04 were second and third, and with back-up from Mollie Hutchinson and Aisling Lowe, Ferrybank finished first team ahead of West Waterford AC.

Junior winners were Una O’Brien and Matteo Mary, both from Waterford AC. The event, which included a number of juvenile races, incorporated the Waterford County Championships.

Blue skies and wonderful sunshine greeted the runners in the 76th annual Slieve Donard Race in the Mourne Mountains of Co Down on Saturday (September 26).

Only after much negotiation with the Forestry Commission and a slight adjustment to the course, the race was allowed to go ahead after earlier dates in May and July proved impossible.

At the sharp end of the race, Timmy Johnston of Mourne Runners used his track speed to pull away early reaching the summit 35 mins 2 secs, with Seamus Lynch of the organising club 23 seconds adrift. Behind them came Jonny Steede of Glen Runners, now over 40, and 16-year-old Tom Crudgington of Newcastle and District, who lost some momentum on the downhill but still finished seventh.

On the descent, Lynch overhauled Johnston and was leading when they reached the tarmac road. At that point, Johnston kicked past Lynch to regain the lead. He went on to win the race for the first time in 50 mins and 31 secs; Lynch finished four seconds adrift. Third and first M40 was Steede in 53:23.

Of the women, Esther Dickson of Newry AC proved the class of the field, reaching the summit in 44 mins 28 secs and crossing the finish line in 64 mins 2 secs. In a close tussle for second place, Sarah Quinn, also Newry AC, just pipped Karen Wilton of Jog Lisburn AC with both women given a time of 72:58.

Further down the field, BARF’s Ian McCulough, who was born in 1945 – the year the race was first held – set off with the ambition of reaching the summit in a time less than 75 minutes. He managed it comfortably in 67 mins 31 secs and went on to finish the race in 1 hr 45 mins 3 secs.

Finishing second in four hours exactly was Paul Tierney of Go Tri Adventure in Co Tipperary, while third was Edward O’Connor in 4:03.

First woman in 4:26 was Patricia McLoughlin of Le Cheile AC; Claire Keeley was second in 4:47 and Mags Dempsey from Tracton AC in Co Cork third in 4:50. A total of 70 completed the course. Dublin-based athletes could not take part in the race owing to COVID 19 restrictions. The end of a truncated track season?

Michele Finn of Leevale AC set an Irish record of 6 mins 16.46 secs when winning the women’s 2000m steeplechase at the City of Barcelona athletics meet in the Estadi Joan Serrahima on Tuesday (September 22).

In the women’s mile, Nadia Power of Dublin City Harriers finished a close third in 4 mins 32

Power had gone through 1500m in 4:14.76, a time which puts her behind only Ciara Mageean in the current Irish rankings. At that point, she was lying second behind eventual winner Marta Pen Freitas of Portugal but was caught by Marta Perez Miguel of Spain in the chase for the line. Power finished in 4:32.50, just behind Miguel whose time was 4:32.26.

Catching up on last weekend

Evan Fitzgerald of Clonmel AC won the senior men’s at the St Senan’s AC Open Cross-Country, held for a 43rd time in Kilmacow, Co Kilkenny on Sunday September 20. He was followed home by Dean Rowe from Gowran AC and Conor Rochford of host club St Senan’s.

It was a little poetic that Fitzgerald’s father John was an Irish international athlete who finished runner-up at the St Senan’s event four times, but never quite managed to win it.

High standards all round

First of the master men was Noel Murphy with his Waterford AC club mate Trevor Power second and Alan O’Connor of United Striders third. Winning the junior race was Matteo Mary of Waterford AC. In the team competition, Waterford AC were the winners, with Ferrybank AC second and Gowran AC third.

At the British Milers Club meet in Nuneaton on Friday September 18, Iseult O’Donnell of Raheny Shamrock finished fourth in her 1500m heat with a time of 4:24.28. Jayme Rossiter of Clonliffe Harriers clocked a time of 3:56.01 for third place in his 1500m heat.
Correction: