An Olympian, a top veteran and a prolific marathoner all impressed this weekend 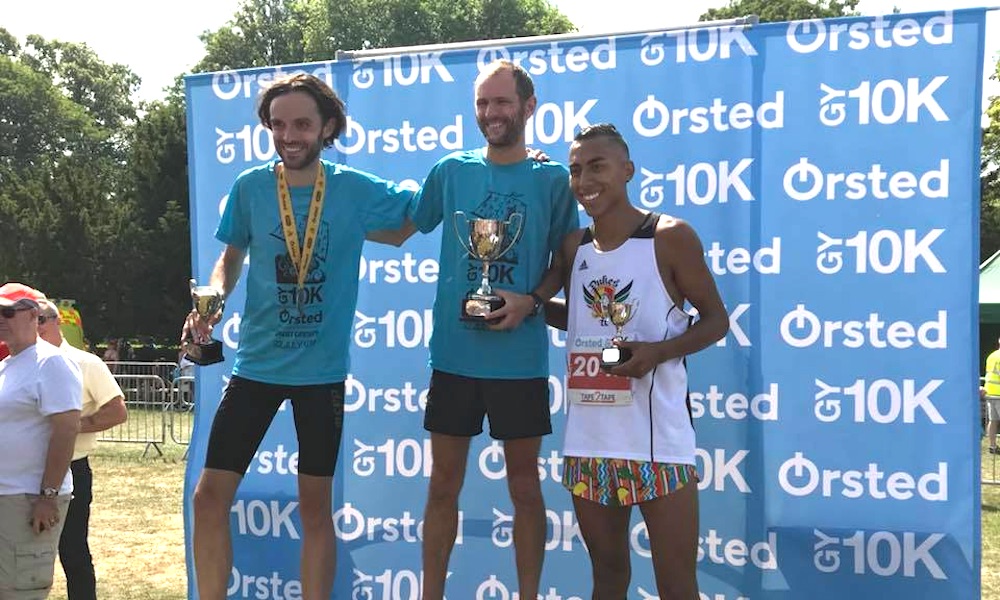 There were 10k races aplenty across the country this weekend, with runners taking on events in Grimsby, Elmbridge, Regent’s Park, Shrewsbury, Musselburgh and Bedford in what has now become customary punishing summer heat for fast running.

This notoriously competitive event on the North Lincolnshire coast did not disappoint as once again it provided some of the fastest times in the country outside of the major city events.

Top veteran and one of Fast Running’s most popular athlete interviewees in a recent feature, Notts AC’s Ali Watson, beat off challengers well over a decade younger than him to win the Grimsby 10k and pocket £300 in prize money as a result. Watson’s 30:12 was enough to beat last year’s victor, Lincoln Wellington’s relative newbie, Lucian Allison, who has only been competing for two years and here ran 30:24 for second. The top two were nearly a minute ahead of third placed Julian Florez, who himself was well clear of 4th, running 31:18 to Lincoln Wellington’s Ryan Page, who posted a 32:04 result. Birchfield Harriers’ Nicola Roberts fought it out with local girl Rachel Robinson, originally from Scunthorpe but now competing for Marshall MK, with the two women finishing just 25 seconds apart. Roberts won out in 34:50 to Robinson’s 35:15, while impressive new Rotherham talent Steph Burns clocked yet another PB in third with 35:54. The lush surroundings of the Surrey countryside provided an attractive backdrop for a fast race at the Elmbridge 10k, with Olympian Scott Overall taking victory in 30:53, his fourth outing over the distance this year and his fourth sub-31 minute clocking of 2018. South London’s V35 Kevin Quinn took second place in 31:19, while multiple fancy dress champion Ollie Garrodd – who holds the European record for the fastest 5k dressed as Santa (16:51) was third in 31:58.

Youngster Eleanor Harrison from Guildford & Godalming AC won the women’s race in 37:27, not far off the 22 year-old’s PB from the recent Vitality London 10,000m. Harrison was a class apart from the rest of the women’s field, but Collingwood’s consistent sub-40 athlete, V35 Lisa Rooney, made it another decent outing when she ran 39:09 for second. Rooney’s club mate Debbie Jackson impressed in 39:36 in third, a superb time for the V45 ace.

Unusually named Sage Pearce-Higgins from Thames Valley won a hard fought race with a brand new PB of 33:33, eclipsing his previous best of 34:19 in the process. Basildon’s Stephen Strange also ran well to run 34:07 for second place, ahead of Newmarket Joggers’ Neil Pollard’s 34:44, proving he is anything but a jogger!

London Heathside AC’s Josie Hinton was 11th overall when she took the women’s race in 38:58, just one second shy of her PB from this year’s Vitality London 10,000m. Ealing Eagles’ Australian ace, Melissah Gibson, took the second prize in 40:47. Gibson is a prolific racer, having competed more than 50 times last year and approaching that number this year already. She also ran seven marathons in 2017, and so far has completed five in 2018, but that pales into insignificance when you look at her stats for 2015, when she ran a total of 14 marathons, with a PB of 2:55:07 from 2014!

Eton Manor AC’s Sarah Flanagan ran 41:53 for third in what looks to be a fine debut over the distance for the V40 athlete.

V45 Paul Jones kept the top prize on home soil for Shrewsbury AC when he crossed the line first in 33:44, well ahead of second placed 16 year-old Jack Pickett’s 34:08.  Yeovil Town RC’s Thomas Vaughan made the long trip up north worthwhile when he nearly chased down Pickett with a fine 34:13 clocking.

Telford Harriers’ provided the winner of the women’s race when the club’s Sarah Benson won from Mercia Fell RC’s Rachel Parker, the V35 taking victory in 38:49 to Parker’s 39:02. Shrewsbury AC’s Sarah Willhoit’s 40:22 meant she joined the men’s winner and club mate Jones on the podium in third. Edinburgh Hare & Hounds’ Jacob Adkin took the top honours at this picturesque setting for a race along the coast of the Firth of Forth on the edge of the Scottish capital. Adkin’s 31:46 time in victory was exactly a minute ahead of Edinburgh AC’s Sam Woods’ 32:46, while it was a closer battle for third as Corstorphine AAC’s Stuart Livingstone crossed the line in 33:01.

Fast improving Riverside Runner and V35, Johanna O’Regan was streets ahead of her nearest rival at this prestigious event, taking victory in a PB 36:52. O’Regan only started racing less than two years’ ago, posting a solitary parkrun performance of 21:27 in 2016, but has made great leaps forward this year, advancing her 5k time to 18:05, her 10M best to 60:58, and her half marathon and marathon bests to 81:24 and 2:53:26.

Fellow V35 Wendy Webber from Marshall MK took the second prize in 39:04, with Cambridge & Coleridge’s Jessica Cocker earning herself a PB when she came in third in 42:18.

The top three men were well spread out as Rugby & Northampton’s Alistair McDonnell took first prize in 32:35, just three seconds’ shy of his PB, with Marshall MK’s Jamie Seddon coming in second in 33:03. U23 Thomas Dell ran a 34:01 PB to take third overall.

There were also some impressive parkrun performances in the UK and Ireland this weekend, don’t miss all the news right here!

First Welsh women’s champion of Snowdon Race for nearly 30 years
Irish athletes were on top form on the track, road and in the mountains