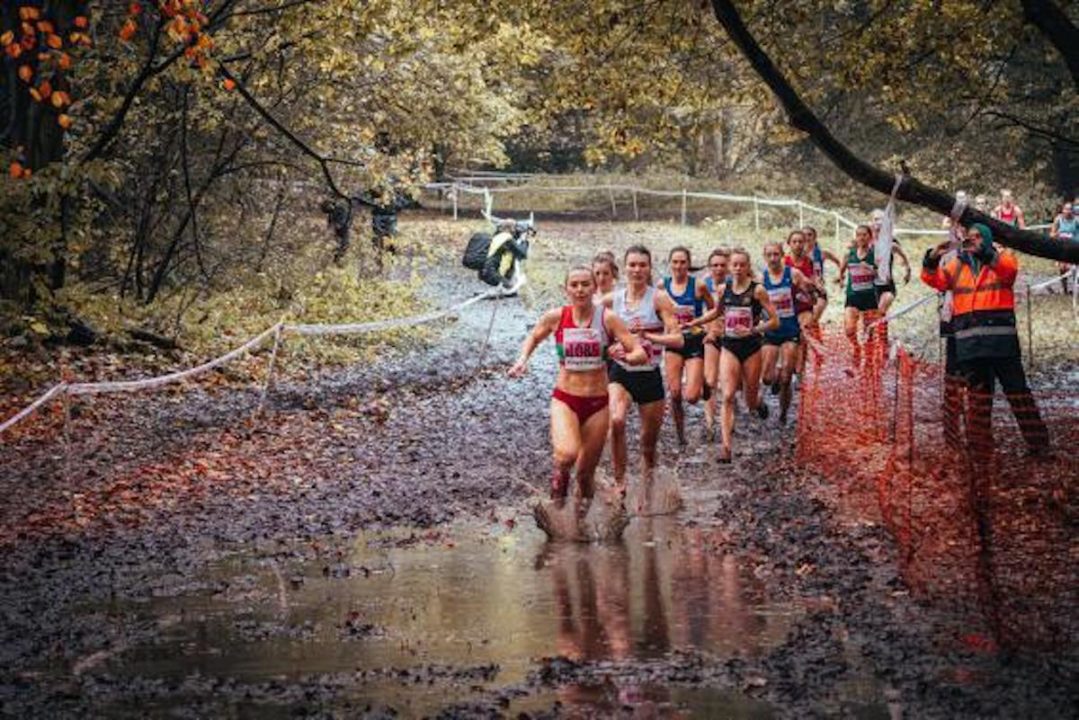 This weekend saw the cross country season get under full swing with the National Cross Country relays, as well as some strong performances on the road over the half marathon, 10k and other distances.

On Saturday, in the wind and rain, hundreds of runners took to the mud in Mansfield for the Saucony English National Cross Country Relays. This annual competition brings true team spirit and determination to the running world, and in perfect timing, the autumnal sun appeared just as the races were underway.

In the senior women’s race, the victory title was once again claimed by Aldershot & Farnham District. After pushing away from Lincoln’s Abbie Donnelly, Emily Hosker-Thornhill gave AFD the lead they needed in the first leg.

Hosker-Thornhill then handed on to teammate Niamh Brown who ran the second leg in the 2nd overall fastest time and Lauren Hall with the fastest overall 3rd leg. In keeping with previous years, it was Blackburn’s Jessica Judd, who after a PB in Leeds last weekend ran the fastest time over the 2nd leg.

High competition levels hint at an exciting XC season ahead

The competition in the men’s race was incredibly high, with plenty of fast athletes pulling on their spikes and haring through the mud.  The victorious men, retaining their title once again, were Leeds City AC. Despite an early setback as Phil Sesemann took a tumble. Sesemann did well to get back up and finish strong enough for his team to grab the win. Photo: Stephen Lee

Sesemann achieved a third-place finish over one of the longer legs last year, but his tumble set him back into fifth place this year. The strong team behind him all ran strong legs pushing Leeds back up the ranks.

It was Sam Stabler of Wreake & Soar Valley that took home the ‘winners’ title for the first leg, Aldershot’s Cross the title in the second leg, Leeds’s Graham Rush, and Emile Cairess in the final leg.

The success continued on the roads in Tatton Park 10k and Half Marathon. On Saturday the 10k took place with some incredible individual performances. The senior men’s title was secured by Mo Abu-Reezeq in an outstanding 30:18. The sub-30-minute PB boasting athlete had a cracking run in his sixth road 10k of the year.

Kirsty Longley of Liverpool Pembroke Sefton was the winner of the women’s race. Longley ran 34:59 for first place, followed by Laura Lombard in a time of 37:45. Hannah Price competed the top three women at Tatton Park, stopping at 38:15 on the clock.

After an astounding run on Saturday, Mo Abu-Reezeq also claimed the title in the half marathon on Sunday! An amazing double performance. The Altrincham athlete ran 67:59 for first place, ahead of Sale Harriers Manchester’s Nicholas Barry who clocked 1:11:18 for a second-place finish. Finishing just 17-seconds outside of his personal best, Paul Jones of Hereford ran 75:07.

It was V40 athlete, Margaret Beever from Stainland who won the women’s race. Beever ran herself to an impressive time of 01:27:42.

This year’s Richard Burton 10k saw a stacked field of high-quality athletes take to the roads of some of Wales’ picturesque villages. Jonathon Hopkins did Swansea Harriers proud with a strong performance and time of 30:36. Hopkins recently dipped significantly under the 30-minute mark, running 29:30 at last weekend’s Leeds Abbey Dash.

James Hunt was next to cross the line as the first of the two Cardiff athletes on the men’s podium. Hunt ran a solid 31:45 and was also amongst those who ran cracking performances in Leeds last weekend, where he clocked 29:12. Just 7 seconds behind Hunt was Tom Marshall, also from Cardiff AAC.

Cardiff AAC’s success did not stop in the men’s race. Lucy Marland continued the performance glory into the women’s event. Marland ran a cracking 36:43 after a PB performance in Leeds last Sunday. Ashleigh Willis of Swansea and Sioned Howells of Amman Valley Harriers finished off the women’s podium in 39:30 and 40:09 respectively.

Rush to the finish line

In keeping with the start of the winter festivities, the Bonfire Burn 10k took place. Graham Rush secured himself the position at the top of the podium. Rush added to the success of Leeds City this weekend with his gold medal in a time of 32:26. Following Rush, in 33:54 was Duncan Coombs and Johannes Arens 34:00, for second and third place respectively.

In the women’s race, the winner was set from the start. Winning by a huge seven minutes, was Georgina Schwiening. The Cambridge athlete clocked 34:37 for first place.

Over the marginally shorter 5-mile distance, was The Deal Castle 5-mile race. Charlie Brisley was the first male to cross the line and cut the tape in 24:43. Brisley of Invicta East Kent stormed the distance to a 5-mile personal best by 50 seconds!

Harrison Tremain crossed the line in second place with a time 27:04. It was the U20 Ashford AC athlete’s debut over the 5-mile distance. It was Stephen Male that took home the bronze medal in a close finish for third position. Male achieved a solid time of 28:02.

In the women’s race, Renata Mcdonnell was first across the line, securing first place in a time of 31:10 for Deal Tri Club. Mcdonnell was shortly followed by Elena Jury in 34:27 and Natalie Long in 35:10.

Back over the half marathon distance, in what has been consistently rated one of the UK’s best half marathons was the Marlow Half Marathon. The winning titles for the men’s and women’s races went to Stuart MacDougall in 1:18:08 and Bethan Huntley in 1:27:40.

Over the 7-mile distance at the Marlow 7-mile, Nick buckle took home gold. The Belgrave Harrier runner ran 40:02 to secure a minute lead. The women’s title was claimed by Becky Atkinson of Maidenhead in 45:38.

There are still plenty of runners on the streets of New York and we will update the round-up as the results come in. Geoffrey Kamworor and Joyciline Jepkosgei, both half-marathon world record holders, were victorious on the tough course in 2:08:13 and 2:22:38 respectively.