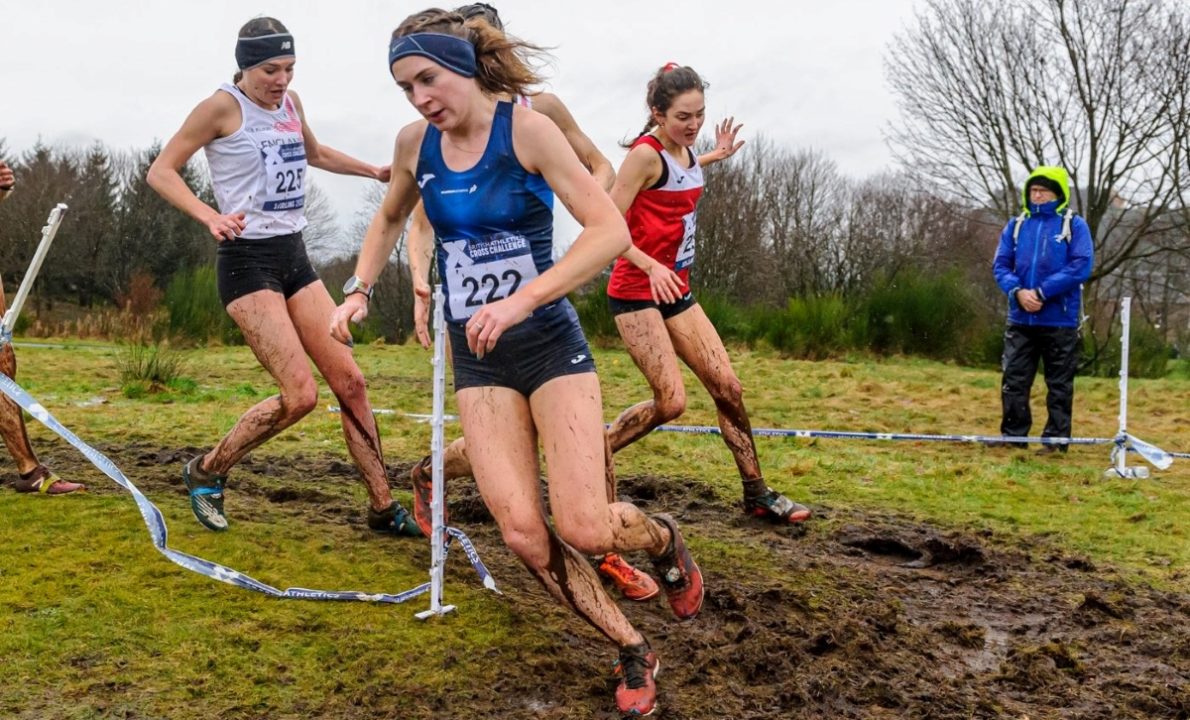 Up in Scotland there was some proper British mud at the cross country, but this didn’t stop everyone from giving it everything and racing hard, whilst some headed to warmer climes for fast 10k action on the road.

In the fourth event of the Cross Challenge Series and also part of the Home Countries International, an impressively strong field of athletes were put to the test over a very muddy course in Stirling.

They battled through the rain and wind, and despite the brutal conditions, some fine performances were given. The race at Kings Park also saw the occurrence of the Great Stirling Castle Run, meaning almost 3000 runners took on the course, meaning it was even more churned up. It might have been brutal, but at least it was character building?!

In the senior women’s race, it was Kate Avery that ran the England team to a first-place finish, earning them the Home Countries title. In what was her second win of the series, Avery also moved herself to the top of the Cross Challenge standings as she finished 11 seconds ahead of teammate Abbie Donnelly.

After an incredibly successful 2019, Donnelly continued to prove her strength with a second-place finish, with Welsh athlete, Bronwen Owen, finishing third in 29:39. The silver Home Countries medal went to Scotland, led by Mhairi Maclennan who finished in fourth place.

The men’s race was won by Welshman and mountain runner, Kris Jones. Despite the heavy-going conditions, Jones made light work of the race and became the final winner of the day.

Jones, who was part of the European Cross Country Championships GB team, alongside Andrew Butchart and Adam Hickey, thrived off the conditions and covered the 8k course in 25:33, 10 seconds ahead of Jamie Crowe of Scotland.

England’s Adam Hickey fought through the entire race and managed to overtake Andrew Butchart to place himself on the podium. Butchart led for part of the race, however a mid-race fall meant the medal positions were taken from him. The second, fourth, and ninth place finishing positions for Scotland meant they secured themselves the Home Countries title for the first time in eight years.

On Sunday morning, in much more pleasant conditions was the Valencia 10k. There were plenty of PB’s for the British athletes, starting with NB athlete, Callum Hawkins. Hawkins, who has been pre-selected for the marathon in this year’s coming Olympics in Tokyo, ran a rapid time of 28:02, a huge 52 second lifetime best.

Following Hawkins, and only 8 seconds behind him, was recent European Cross Country competitor, Ben Connor. Connor was yet another athlete to set a PB, shaving 27 seconds off his previous best set last year. Third male Brit to cross the line was Derek Hawkins. Hawkins (Leeds City) ran a strong 29:26, only 2 seconds outside of his best.

Jenny Nesbitt, part of this year’s Fast10 class of 2020, had an incredible race and was yet another British athlete to set a PB. Nesbitt stopped the clock on 32:42, a whole 10 seconds quicker than her old time.

On the other side of the pond, Eilish McColgan had a ‘surreal experience’ in the Disney 10k, with an early 5:30am start! After battling along a tricky course, McColgan finished third overall with two male Brazilian athletes ahead of her. She crossed the tape in a strong 32:29.

Also over 10k, in tough conditions, was the Stubbington 10k. The winning position on the podium went to Joe Wade of Ryde Harriers. The Isle of Wight athlete ran an impressive 30:57 at the picturesque south coast event. Claiming second place was George King of Winchester & District AC in 31:14 and rounding off the top three was Chris Powner, also of Winchester & District AC, in 31:46.

In the women’s race, Southampton’s Jen Granger took the win to retain her title. Despite the unfavourable conditions, Granger improved on her time from the event last year, clocking 35-minutes flat just edging out Louise Damen (35:04) who’d led for the whole race in a final sprint for the line. Lesley Locks of AFD was third in 36:18.

Over the shorter 5k distance, was the RunThrough Chase the Moon 5k around the Olympic Park. The winner of the men’s race was James Sullivan in 16:57, a strong 32 seconds ahead of second place.

In the women’s event it was Cambridge and Coleridge’s Becky Hair who ran herself to a huge PB with a significant lead on the other female athletes. Hair ran an impressive race to finish third overall in 17:31. It was Fast Running’s own, Gill Bland (Harrow AC), who claimed the bronze medal in a PB time of 19:28, her first sub 20-minute 5k yet! An incredibly good sign for the first month of the year!

Hot action at the Winter Windsor

There were also some speedy performances at the Winter Windsor event. Over the half marathon distance, with yet another solid run from a Cambridge and Coleridge athlete, it was Norman Shreeve who claimed himself the overall title. Shreeve stopped the clock on 01:09:27, five minutes ahead of second place finisher Andrew Baker.

Completing the men’s podium was Gavin Dale. For the women, it was Windle Valley Runners athlete, Dawn Godwin, who took the win in 01:25:05. In second place was Sharon Walker (Dorking & Mole Valley AC) followed by Zelah Morrall (Cornwall AC).

The Brass Monkey half marathon took place at York racecourse. North Derbyshire RC’s Richard Start crossed the tape in first place. Start ran a strong 01:07:33. Next male to cross the line, in 01:07:53, was Wondiye Indelbu of Leeds City. Rounding off the men’s podium was Jack Wood or Ilkley Harriers AC in 01:08:26.

The women’s race winner, in 01:18:30, was Lorna Young (Leeds City) with a 28 second personal best. Shortly behind Young in 01:18:40 was Charlotte Mason (City of York AC) with a huge 3-minute PB! The final medal winning female was Georgina Weston of Rotherham Harriers and AC in 01:19:11.

The Oundle New Year 10k saw John Herbert of Helpston Harriers run a strong time of 33:24 to finish first overall. The first female to cross the line, in 37;41 for Ribble Valley Harriers was Hannah Oldroyd.

At another RunThrough event of the weekend, was the RunThrough Tatton 10k. Bringing it home for the women, in an impressive 36:47, was Mollie Williams of Stockport Harriers. Williams ran herself to a 17 second personal best at her first 10k in 4 years. Sam Shepherd of Total Tri Training achieved the overall win in a time of 34:53.

Back in the mud

This weekend was a busy weekend with cross country league races all over the country. The Alton Sports Hampshire League saw Jess Gibbon (Reading AC) take to her club’s home turf at Prospect Park. Following on from a fine performance at the Euro Trials in Liverpool and two previous Hampshire league wins this season, Gibbon crossed the line just under a minute ahead of second place’s Georgia Hayes, also from Reading AC.

For the men, it was Aldershot’s Luke Prior who took home gold with a convincing margin. It was Poole AC who secured second position with Thomas Austin coming in 27 seconds behind Prior.

Some strong performances were seen in the Sportsystems Surrey League races. Belgrave athlete, Nick Goolab, ran himself to an individual win. Goolab was followed by Johnny Van Deventer and Owen Hind. It was Olivia Matthews who led the women’s race into the finish for Clapham Chasers. Lauren Major of Thames Hare & Hounds was next followed by Belgrave’s Georgie Fenn.

The Birmingham & District League event also saw athletes take to the mud and hills. It was Omar Ahmed of Birchfield Harriers who ran a strong race to cross the line in first position.

At the Chiltern League race, Bedford and County AC dominated in the men’s event. Sub-30-minute 10k runner, Matt Bergin, took home the gold medal with a solid performance. Following Bergin in second place was Dan Jarvis and Harry Brodie in third. In the women’s race it was Chiltern Harriers who took the team win. The individual winner was Melanie Wilkins of Wycombe Phoenix, followed by Elle Roche and Lara Bromilow, both from Marshall Milton Keynes AC.

The Met League also took place this weekend at Alexandra Palace, again with plenty of mud. Elizabeth Janes of Herts ran a strong race to finish first, over 1.5 minutes ahead of second place. For the senior men, it was Dylan Evans (SBH) who secured himself the win ahead of Austin Roth.