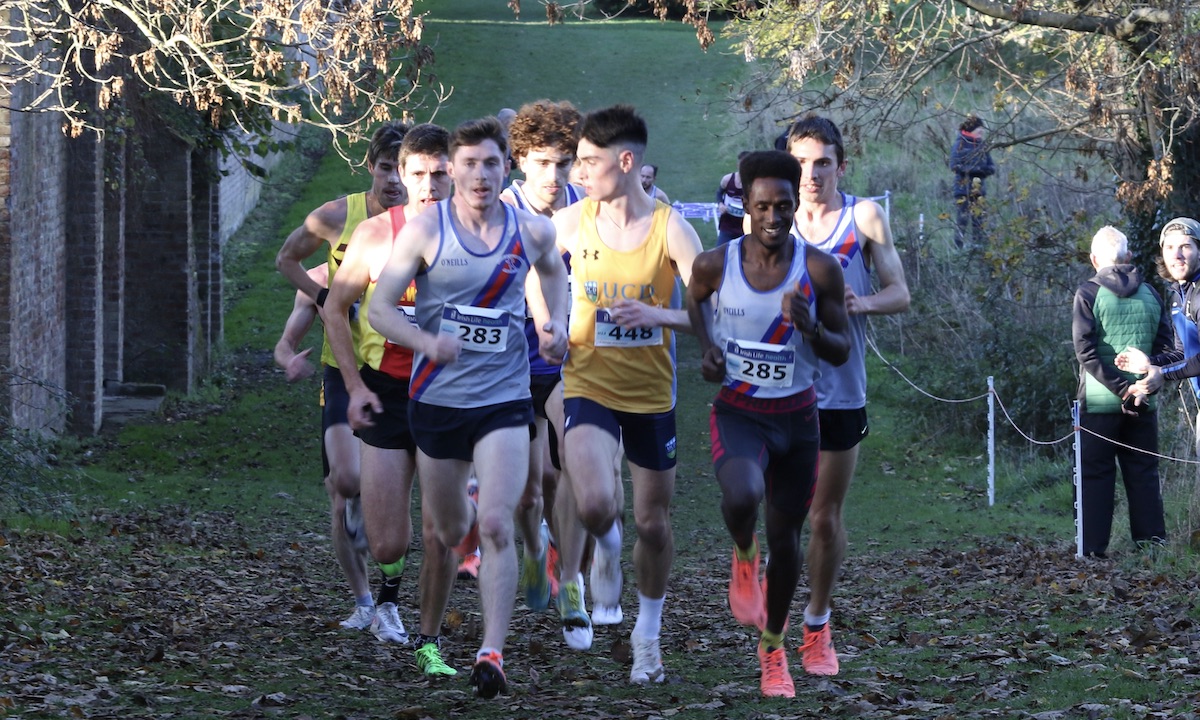 In the women’s 8km race, Michelle Finn of Leevale AC moved into and early lead and, by the end of the opening lap, her victory was assured.

By contrast, the men’s 10km race was a tactical battle only decided on the final of six laps, when Hiko Tonosa of Dundrum South Dublin AC took over in front.

The women’s race came first of the two races with Finn setting the pace from the “off”. Behind her was a group of strong athletes including Roisin Flanagan, who is Finn Valley AC’s newest recruit, Aoibhe Richardson of Kilkenny City Harriers, and Tokyo Olympians Sarah Healy of UCD, Ciara Mageean of City of Lisburn AC and Aoife Cooke of Eagle AC.

Not far off the pace was comeback kid Shona Heaslip of An Riocht AC, the Intercounty cross-country winner of 2016, and the ever-consistent Mary Mulhare of Portlaoise AC, along with two doughty masters – Anne Marie McGlynn of Letterkenny AC and Leevale’s Lizzie Lee.

The chasing pack was soon reduced to Flanagan, Richardson and Healy and so began the battle for the minor placings. In the end, it was Healy who fought her way into second place, with Flanagan holding off Richardson for third. In a brilliant race, Cook was fifth, followed by McGlynn, Mulhare and Mageean. All are in contention for places on the Irish team for next month’s European Cross-Country Championships at Abbotstown on December 12.

Healy however may be preferred for the U23 team. Second and third in that category were Aoife O Cuill of St Coca’s AC and Danielle Donegan of UCD AC.

First of the teams on 87 points was Letterkenny AC. It was a first ever cross-country title for the Donegal club. Three times champions Leevale was second on 98 points.

A tactical affair with a large lead group

A large leading pack stuck pretty much together in the men’s race, swapping the lead like the peloton in a cycle race.

On the first lap, it was Finn McNally of North Belfast Harriers who was setting the pace the pack, with Hiko Tonosa, Paul O’Donnell and Emmett Jennings of Dundrum Dublin AC, Ryan Forsyth of Newcastle and District AC, Darragh McElhinney of UCD AC, Donal Devane of Ennis TC, Pierre Murchan of Dublin City Harriers, Andrew Coscoran of Star of the Sea AC and Leevale’s Ryan Creech among the fifteen or so tucked in behind him.

On the second of six laps it was Finley Daly of Sligo AC, who was leading, just ahead of McNally and Murchan. McElhinney and Tonosa, the pre-race favourites, were cruising along and staying out of trouble.

By the half-way stage of the race, O’Donnell and Jennings were now more prominent and a DSD team victory looked very possible.

By the time they reached the hill on the final lap, Tonosa had moved into top gear with only McElhinney attempting to stay with this. So began a 600m chase for the line with Tonosa just holding off the Bantry youngster. His winning time was 30 mins 32 secs; McElhinney was three seconds behind for second and first U23, O’Donnell was third and Jennings fourth. With solid backing from Matt Bergin in 15th place, Dundrum South Dublin AC were clear winners of the team title for the first time since 2014. Defending champions, Clonliffe Harriers, led by Sean O’Leary in 16th place, were second and Leevale AC, led by Ryan Creech, seventh, were third.

Sixth overall and second U23 was Keelan Kilrehill of Moy Valley AC while eighth and third U23 was McStay of Galway City Harriers.

Taking the county title with six placers in the top seventeen was Dublin; Cork was second and Antrim third.

In the combined junior and under 18 men’s race, Nicholas Griggs of Mid-Ulster AC added yet another title to his growing collection. He was also first U18. Second was Dean Casey of Ennis Track Club, while third was Scott Ferguson of Metro St Brigid’s AC.

Jane Buckley of Leevale AC won the junior and U18 women’s race ahead of DSD’s Emma McEvoy who was also first U18. Rebecca Rossiter of Loughview AC was third and second U18 and Aoife McGreevy of UCD AC fourth and second junior.
Senior, under 23 and junior teams for the European Championships are to be announced early this week. A mixed relay team may also be selected.

At the Comber Cup in Dundonald, Olympic steeplechaser Kerry O’Flaherty not only won the women’s race but helped Newcastle and District AC to team victory. More results when we get them.

Participants ran out for five miles, then turned around for the return journey on the flat tarmac surface. The train, with supporters and families on board, passed the runners after a mile and did likewise after the turn.

Paul Doran of United Striders and Waterford’s Noel Murphy were well clear at halfway with Doran pulling away on the return trip for a 25-second victory, 54:16 to 54:51. Warren Roche of Ferrybank was third in 55:55.

A total of 15 runners of the 284 finishers broke the hour and amongst them was women’s winner Ruth Fitzgerald. The Waterford athlete crossed the line in 58:02, almost a minute-and-a-half faster than the 59:31 she ran when the race was last held in 2019.

Cork runners Linda O’Sullivan of Watergrasshill AC and Linda O’Connor from Carrigaline finished second and third in respective times of 64:54 and 65:13.

Organised by the Saturday Road Runners in aid of the Waterford and South Killkenny Down Syndrome branch, it was certainly great value for an entry fee of just £15. An extra bonus for each finisher was to be greeted at the line by the familiar tones of Fintan Walsh, the ‘Voice of Waterford Athletics’ for the past six decades.

On the roads elsewhere

At the annual Hollymount International Road Races in Co Mayo on Sunday (November 21) Hugh McArdle was the winer of the men’s 10km in a time of 32.50. Second place was Dan Charlton in 33.30 and third was Pauric Ennis of Tullamore Harriers in 33.51. Category winners were Danny Carr, John Mullin (the recently crowned Irish adventure racing champion) and Alan Ashton from Liverpool Harriers.

Mayo native Maura Ginty, who runs with Sportsworld AC in Dublin, was the winner of the women’s 6km in a time of 23 mins 53 secs. In second place was Angela O’Connor with Nicky Bird in third place. Paula Donnellan Walsh, Martina McIntyre and Geraldine Heneghan were winners of their categories.

Winning the junior 3km was Eva Burke, who joins the exclusive club of girls who have beaten all the boys in a running race. Second was Aodh Murphy followed by Daniel Healy in third place

Winner of the Annagassan 10km in Co Louth on Saturday (November 20) in a personal best time of 34 mins 14 secs was Keith Geoghegan of North East Runners AC. In a closely fought women’s race Sabina Keogh of Dunboyne AC finished just four seconds ahead of Emma Boland from Newbridge AC to win in 38:13. The race remembers the legendary Noel Carroll, athlete supreme and one of the founders of the Dublin Marathon, who was a native of Annagassan.

Hehir finished over two minutes clear of the chasers in 52 mins 30 secs. Second in 54:56 was Alex Gray of Roundwood and District AC while third in 57:10 was Joshua Chambers.

Lianne van Dijk was the winner of the 100km at the Dublin Mountain Trail Running Festival from Glencullen on Friday and Saturday (November 19-20).

Cormac Dalton of Mullingar Harriers was first home of the Irish in the men’s race at the NCAA Division 1 Championships in Tallahassee, Florida on Saturday (Novemweber 290). Dalton finished 34th in a time of 29 min 29 secs for the 10km course.

St Leo hosted the Division 2 championships where freshman Fiona Hawkins , who has recently declarecd fgor Ireland, finished 30th and helped Adams State to team victory in the women’s 6km race. Also on the team was Ava O’Connor of Waterford AC who finished 46th, while coming home in 41st place for the host college St Leo was Faye Dervan of Tallaght AC.