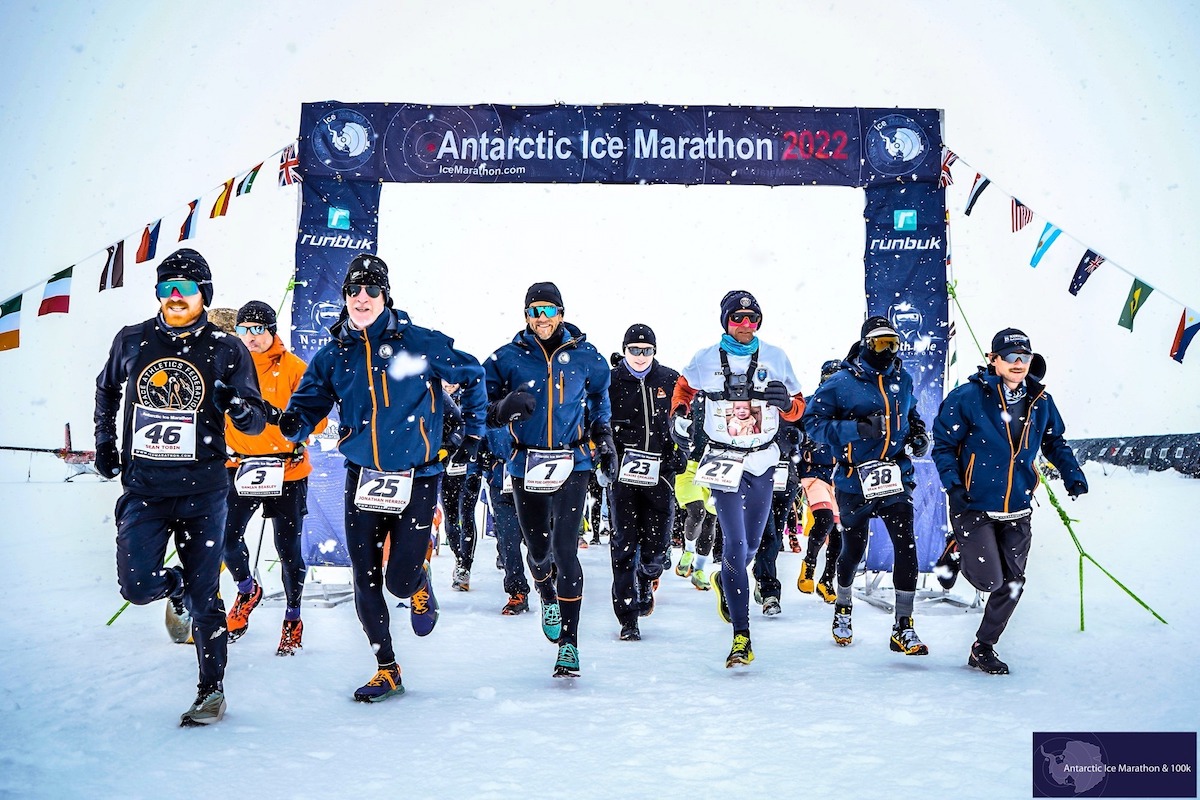 From Antarctica to Abbotstown Lindie Naughton covers all the Irish endurance action.

Tobin had set off in pursuit of the record from the start and by the time he passed through the halfway point in 1 hr 23 mins, he had a commanding lead. Despite battling the treacherous underfoot conditions and even falling over at one point. He reached the three-quarter point in 2 hrs 8 mins and then pushed on to the finish.

Other Irish runners in action were Tobin’s coach Feidhlim Kelly of Raheny Shamrock AC who finished sixth in 4:20.58, and Ruairi Grealish from Galway who was 24th in 5:53.19.

Tobin is not the first Irish winner. In 2016, Galway athlete Gary Thornton, an experienced mountain runner, was first home in 3:37:13.

A total of sixty-one people from twenty nations started the race. While the temperature at around-14º was mild by Antarctic standards, it was snowing when the runners set off and underfoot conditions were tricky.

Last woman home was Christine Hobson from Britain in 8:33.11 Finishing 46th and last of the men was Cere Coichetti of the USA in 8 hrs 55 mins 6 secs.

With an entry fee this year of $19,500 (€18,443.80), plus the flight to Puntas Arenas and accommodation en route, the race attracts an exclusive clientele. Road run of the weekend came from Efrem Gidey of Clonliffe Harriers. After his excellent fifth place in the U23 race at European Cross-Country, Gidey headed for Paris, France, where on Sunday (December 18) he finished ninth in the Corrida de Houilles 10km, in a new best road time of 28 mins 13 secs for the distance

Kelly’s the hero in Drogheda

Kieran Kelly of Raheny Shamrock AC was the winner of the Drogheda and District Christmas 5km, one of a number of road races taking place on Sunday (December 18) when the cold snap at last ended.

After a good battle with Tadhg Donnelly of the host club Drogheda and District AC, Kelly pulled away to win in 15 mins 8 secs. Donnelly was three seconds behind in 15:11, with Eoin Molloy of Castlegar AC third in 15:23. Fifth and first junior in 15:45 was Christopher Keenan of Drogheda and District.

First woman in 18:01 was Catherine O’Connor of East Down AC, followed by Laura Matthews of North East Runners in 19:11 and Caroline Donnellan of Edenderry AC third in 19:44.

In the team competitions, North East Runners beat Drogheda and District by three points to finish best of the men.

Drogheda and District, led by Carmel Keenan in tenth place, proved best of the women’s teams ahead of Ace AC Winners in the junior team categories were the boys of Dunleer AC and the girls of Drogheda and District. A total of 481 completed the race.

Winners of the Lake Run in Co Down, also on Sunday, were Gary Crummy in 36 mins 58 secs and Aislinn Crossey in 44:47. The race takes in a seven mile route around Lake Camlough in Newry. Emer and David McGlynn made it a family double at the Butlerstown 5km. Photo: John Walshe

In Waterford, there was a family double for the McGlynn family at the Butlerstown 5km with David setting a new course record of 14:34, six seconds inside Harry Colbert’s best from last year, and sister Emer winning the women’s race, writes John Walshe.

Over a minute behind for second in a time of 15:47 was another Waterford AC man, Marty Matteo, with Noel Murphy making it a clean sweep for the club when coming home third in 16:05.

Held in aid if the Waterford Lions Club Christmas Hamper Appeal, a disappointing turnout saw less than 60 taking part. With a fine prize list and a souvenir mug, flapjack and chocolate bar for all finishers – all for a very reasonable €12 – it makes one wonder how races that charge double (and even treble) attract much larger numbers.

The wet and windy morning may have kept the runners at home but it certainly didn’t dampen the enthusiasm of the ‘Voice of Waterford Athletics’, Fintan Walsh.

Now well into his eighth decade, Fintan has been associated with these Butlerstown events since they began in the late 1980s and his knowledge – along with that familiar dulcet tone – is as sharp as ever.

Winner of the Simon BHAA Turkey Trot 5km was Conrad Watt. The race was a “predictor” handicap and Conrad had predicted that he’d finish in 17 mins 20 secs. He did better than that finishing in 17:09 – eleven seconds faster.

Earlier in the day, East Cork AC had made it a double at Sunday’s Cloyne 4km with Tim O’Donoghue first home in 12 mins 20 secs and Fiona Santry first woman in 14.02 – and quite a few then lining out in the BHAA Santry Run.

In the bitterly cold conditions last week, indoors was the place to be on Wednesday evening (December 14) when the third round of Track and Field Live took place at the NIA in Abbotstown.

Over the slightly unusual distance of 1000m, Amy O’Donoghue, a new recruit for Dundrum South Dublin AC, proved fastest of the women in 2:52.11 with Mark Milner of UCD AC quickest of the men in 2:22.88.

Winning the men’s mile in 4:24:08 was Michael Murphy of Tullamore Harriers.

Date for the fourth Track and Field Live meet is Wednesday, January 18, at the NIA, Abbotstown.

Season’s greetings to everyone – here’s to a 2023 full of running on roads, hills and tracks!