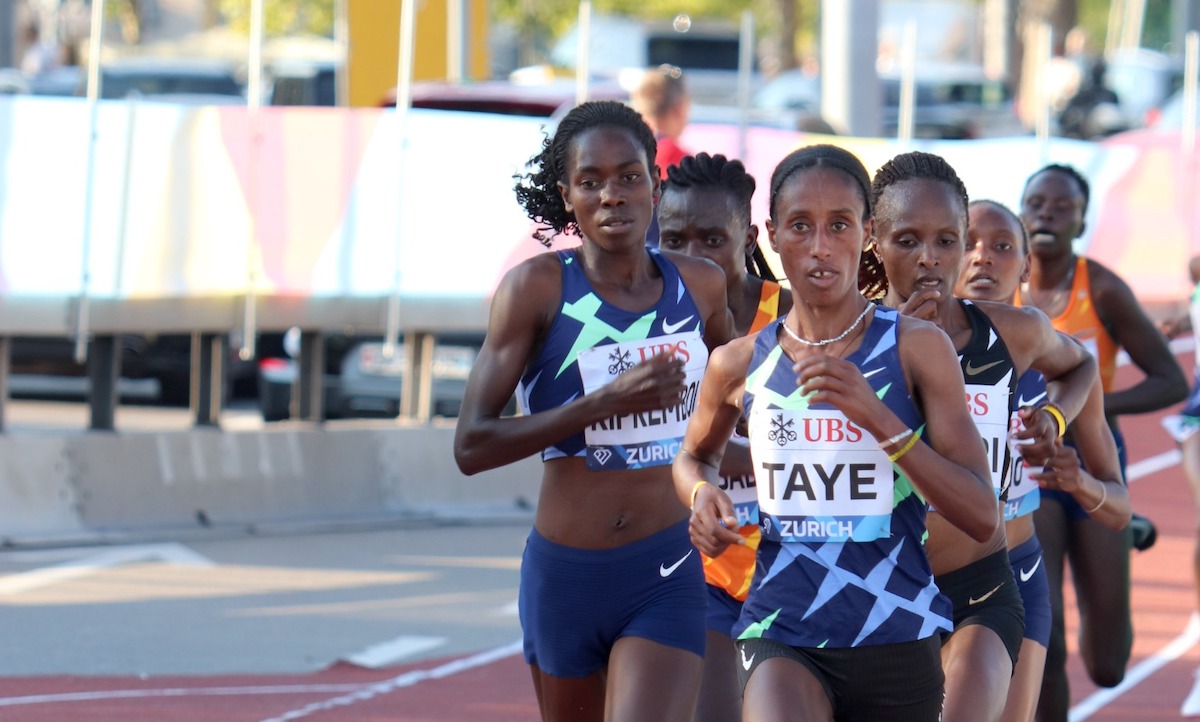 Fast finishes and starts to the year as world records fall abroad and domestic races get us excited for the year ahead.

***The weekend round-up to start this year will be sponsored by “1001 Running Tips: The essential runners guide” written by our editor Robbie Britton and available here. Enjoyable, but informative advice for all levels of runner, from 5k up to ultra-marathon.***

The Cursa Del Nassos in Barcelona saw 2021 finish in unbelievably spectacular style with both 5k road world records being broken – the women’s by a huge margin. The race had a mixed start, so it seems that both genders benefitted from a group of athletes on fine form.

The rising distance star is only 21 and while it’s unlikely anyone predicted this exact result, there were pointers that she was someone to keep an eye on when she set the Ethiopian 3000m record of 8:19.52 earlier this year (not exactly a slow field) and ranked as second-fastest woman in the world over 5000m this season (not exactly a slow year). Sweden’s Meraf Bahta was second in 15:04. Aregawi in action on the track earlier this year. Photo: James Rhodes

Berihu Aregawi, also Ethiopian, was perhaps a more likely candidate for such a result having won the Diamond League 5000m earlier in 2021. He ran largely solo, finishing in 12:49, two seconds faster than Joshua Cheptegei’s previous marker. Peter Maru was the next to finish over forty seconds later in 13:30.

In the Cursa Del Nassos 10k there were some fast times, albeit not world beating, with Lahcen Aid Alibou the men’s winner in 29:05 and Marta Galimany first lady in 32:28.

From Great Britain, Chloe Price of Birtley AC ran a PB of 36:32 to place 11th lady, whilst clubmate Adrian Biles ran 30:38 to finish 16th. Gary Taylor was the only other Brit in the field, with 34:28 and all three finished the year with new 10k PBs.

Ethiopian athletes had a fine time on New Year’s Eve as the San Silvestre Vallecana 10k in Madrid was won by Degitu Azimeraw in 30:26. She was runner up in the London Marathon in October (2:17:58) and has clearly not let the marathon affect her speed, setting the third fastest time in the race’s history.

Unfortunately, the race also served as a little reminder of the impact of Covid last year, as Helen Obiri had to pull out at the last minute after testing positive.

Finally for the overseas results – we know it’s not a race but Charlotte Purdue was first finisher at the Albert Parkrun, Melbourne in 16:05. This isn’t Melbourne parkrun, but it has a bit of tarmac and grass, so could be. Photo: Kevin Morris

Now, let’s go back in time a little and look over the final races of 2021 before we charge headlong in 2022.

The Ribble Valley 10k attracts high quality athletes, so it’s always a joy to look at the results. This year the top honour went to Jonny Mellor in a time of 28:58. The Liverpool Harrier held a clear lead over Josh Griffiths, who finished in 29:25 and young mountain runner Chris Richards in 29:45.

Jess Piasecki finished her year with a bang, taking the ladies’ crown in a course record of 31:38. She was being chased down by fast-finisher Laura Weightman who was runner up in 31:35. Third place went to Eleanor Bolton in 33:12. Traditionally the first of the post-turkey racing, the Witham Not The Boxing Day 5 was a day later than usual this year. David Green (Rigby/Northampton) took an early lead for men and held his lead right to the finish to take the tape in 25:46 ahead of Crispian Bloomfield of Billericay Striders (26:16) whilst Shane Boxall of Southen held off the late challenge of Ryan Day (Great Bentley) to take third place in 26:35.

The women’s race was more straightforward with Hayley Munn (Rigby/Northampton) sealing the win in 28:36 some 2 & 1/2 minutes ahead of second placed Heidi Hogan-steele from Colchester Harriers (31:07) and third placed Jackie Stratton of Springfield Striders (31:40).

10k still the favourite distance to end the year Always great to see Robbie Simpson running fast on the roads, just like his blinding performance at the Commonwealth Marathon. Photo: Bobby Gavin

The third of the Tempo Winter Series 10k saw Ben Kruze win on the day in 33: but Andrew Boon still holds the series lead. Caroline Warrington was top lady in 42:03. Donna Allen is overall series leader at the moment.

V40s snaffled all the podium places in the men’s race at the Wheaton Aston Roman 10k where Lloyd Biddell of Mercia Fell broke the tape in 32:45. Craig Pilsbury PB’d for second in 32:48 and Christopher Andrew Ashford also bettered his best, finishing in 32:54 for third.

Senior lady Kelly Louise Butler raced home in 37:21, taking the win for City of Stoke. She held off Carli Baldwin, who is unlikely to be disappointed since she goes home with a new PB of 38:02. Olivia Harris was close behind in her own PB of 38:12.

New Years Day being a Saturday wasn’t just a great excuse to start the year with a parkrun. Many were out there racing hard from the get-go (or maybe setting a marker to work from).

The Serpentine New Year’s Day 10k was a start-of-the-year treat for Sarah Winstone and Tom Aldred, who won in 36:41 and 31:53 respectively.

Cleethorpes AC also held a NYD 10k race where Lewis Jagger clocked a brilliant 30:47 to take victory over Matthew Bowser (31:14) and Adam Dalton (33:00). Becky Briggs left her normal London roads behind to hit the Lincolnshire roads and bag a win in 35:34, a comfortable victory ahead of Sophie Wallis (36:31) and Rebecca Gallop (37:04) Becky Briggs bravely tackling hard solo miles in the second half of the Olympic Marathon Trial in 2021. Photo: Nigel Bramley

At 6.5 miles there aren’t many quarter marathons around but the Broadstone Quarter Marathon is one of them. Joanna Wright was first lady in 40:48 and James Share took a clear win in the men’s race finishing in 34:54. Laura Mooney led the women home in 16:45, followed by Celine Gavin in 16:51.

The Wymondham NYD 10k results are still pending but should be available here soon.

With NYD hangovers clear, Sunday brought with it good conditions and more racing. The Central Lancs Half Marathon offered an early chance to get some long distance racing in whilst taking a picturesque route through the countryside near Blackpool.

Geraint Williams of Swansea Harriers was first through the tape in 74:39 with Elliot Kerins a safe distance behind in 75:59. Christopher Morgan was third in 76:12. Emma Taylor (City of Stoke) was ninth overall and top lady, clocking 81:17 to beat Carla Molinaro who ran 83:29 and Belinda Houghton in 87:05.

Results for the Leigh on Sea 10k, South by 5k Bellahouston Park and the North Lakes Half are all pending.

In cross country news, Kent Fitness XC was first back into the breach, running their fourth fixture of the season at Minnis Bay, Birchington.

Peter Hogben took top honours for Canterbury Harriers, finishing in 36:29 ahead of Jack Bradley of Thanet RR in 36:50 and V40 Jamie Philip of Sevenoaks AC who ran his debut in 36:53.

Deal Tri Club can thank Renata McDonnell for putting them in a winning position, with a run of 40:49. Claire Day (Paddock Wood) was 11 seconds behind and Nichola Evans of Larkfield AC was third in 41:59.

The South West Inter County Championships was also due to take place but no results were available at the time of writing.

***The weekend round-up to start this year will be sponsored by “1001 Running Tips: The essential runners guide” written by our editor Robbie Britton and available here. Targeted at all levels of runner, from 5k up to ultra-marathon.***