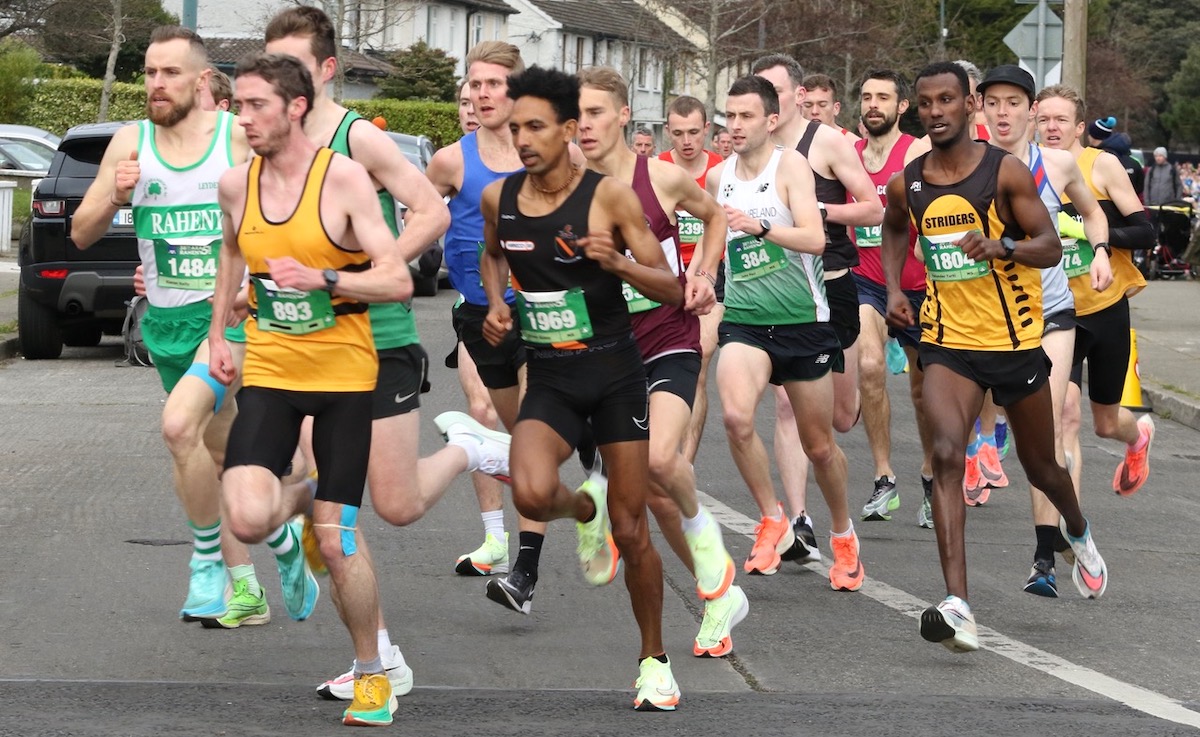 Efrem Gidey and Fionnuala McCormack led home a massive entry of 3,500 at the 38th Raheny 5-mile in Dublin on Sunday (January) — the first major road to be held in the city in almost two years.

Gidey, of the Clonliffe Harriers club, was making a return to racing and a period out with injury and he was to the forefront from the start of the race, around a new look course which tracked its way through St Anne’s Park and is possibly not as fast as the original course over the local roads.

With half a mile to go, Gidey had a clear lead and he finished in a time of 24 mins 41 secs.

In the team competition which attracted a record total of seventy-nine teams, Creech was leading Leevale to a comprehensive team victory over host club Raheny Shamrock. Making up the Leevale team were Conor McCauley and Gavin Rourke.

A further fifty-eight masters’ teams had signed up for the race, with Portmarnock AC the winners ahead of Raheny Shamrock and Rathfarnham WSAF AC. Of the women, Fionnuala McCormack of Kilcoole AC, who had finished first woman the last time the race was held in 2020, again proved the class of the field finishing in 27 mins 32 secs. Sorcha Nic Dhomhnaill of Donore Harriers was second in 27:51 and Nakita Burke of Letterkenny AC third in 28:29.

Dublin teams for the win

Making it a Dublin top three were Raheny Shamrock second and Sportsworld RC third. When it came to the masters, Raheny Shamrock had their only team victory of the day finishing first of forty-seven teams. Mullingar Harriers were second and Clonliffe Harriers third.

Never far from anyone’s minds was the late Pat Hooper, founder of this great race and a club man through and through. How delighted would he have been to see both road running and club athletics back with such a bang!

Also back in action at the weekend was the Marathon Club of Ireland, with Aidan Hogan in 3:15.45 and Anne Jennings in 3:53.57 the fastest man and woman at its event in Bracknagh, Co Offaly, on Saturday (January 29)

Hennessy equalled his 2020 winning time of 15:25 in second with James Tanner of Nenagh Olympic third in 15:28

In a close women’s race, Marie-Claire McCarthy just got the better of her Clonmel club-mate Angela McCann, her 18:28 giving a nine-second advantage over McCann

Highlight of the Irish performances at the Millrose Games in New York on Saturday (January 20) was a second place for Luke McCann of UCD AC in the Michael Blum Mile. McCann was leading at 1500m with a time of 3:42.27 and held on to finish second in 3:58.21. Race winner was Shane Streich of Atlanta TC in 3:57.98

Both Grace Foley and Cian Donnelly finished third in the respective Fastest Kid in the World races.

Brian Fay of Raheny Shamrock AC was one of three Irish athletes to break four minutes this weekend, running a time of 3:55.14 when competing for the University of Washington on an over-sized track of 300m. The time knocked over three seconds off his previous best.

Darragh McElhinney of UCD improved his personal best time to 3:42.89 when winning the 1500m at the Irish Universities Indoor Championships in Athlone on Saturday (January 29).

His UCD teammate Mark Milner was second in 3:44.48, also a personal best.

Overall, UL finished top of the men’s table with DCU best of the women. A day later, also in Athlone, master athletes were warming up for the Europeans Masters Indoors in Portugal in a few weeks time, most notably perennial winners Joe Gough of West Waterford AC and Ann Gilshinan of Slaney Olympic. On the other side of the world

Down Under in Melbourne, Sinead Diver of Mayo AC ran a time of 32:36.15 to finish fifth in the Zatopek 10km at Hagenauer Reserve, Box Hill, on Wednesday (January 26)

Cross-country season isn’t over yet

In the men’s race, Owen Mullan of Omagh Harriers was the winner from Philip Goss of North Belfast Harriers and Chris Hutchinson of Annadale Striders. With four finishers in the top eleven, Annadale Striders took the title title by six points from North Belfast Harriers. Newcastle and District were third. Winning the M65 race was Gerry O’Flaherty of City of Derry Spartans

Charlie O’Donovan of Leevale AC finished a fighting second in the mile with a personal best time of 3:57.46 at the Sykes and Sabock Invitational in University Park, Pennsylvania, on Saturday (January 29) . Just a fortnight ago, O’Donovan, a student at Villanova, ran 1:49.63 for 800m in New York.

Alex O’Neill of Ennis TC, competing for Providence, clocked a time of 2:06.77 when she finished seventh in the women’s 800m at the John Thomas Terrier Classic, hosted by Boston University on Friday (January 28).

Clocking a time of 8:00.39 to win the 3000m at the Washburn Open in Topeka, Kansas, on Saturday (January 29) was Shay McEvoy of Kilkenny City Harriers. Hot on his heels in 8:00.87 was his Kilkenny clubmate Peter Lynch. A day earlier, Michael Power of Waterford AC finished third in the mile in 4:01.17. All three are students in Tulsa.

Schools athletics was back in some style last week, with both East and West Leinster Cross-County Championships taking place in the Phoenix Park.

Holly O’Brien of St Andrew’s qwon the inter race after a close tussle with Anna Watson from St Joseph of Cluny Killiney. St Andrew’s was the winning team.

Jonas Stafford of East Glendalough won the senior boys race where Ard Scoil Ris were the team winners. In total, 339 girls and 269 were in action.

At the West Leinsters a day later, three of the four boys’ races attracted entries of over a hundred. Winning the senior title in some style was Scott Fagan of Castleknock Community College, with his school taking the top three places and clear winners of the team title.

Cormac Dalton won the inter title for HFCS, where Belvedere’s A squad was top team; the school had six teams entered.
Making it a Castlenock Community College senior double in the girls senior race was Sadbh Mohan. Maynooth PP was first team. In total, 433 boys and 288 girls ran. Full result at www.popupraces.ie

In Connacht, the finals take place in Loughrea next Sunday and among the contenders in the senior boys’ races are likely to be Oisin Davis of Pres Athenry, winner of the south zone title last week, and Niall McLoughlin of St Gerald’s, the north zone winner.