Ultra-running and the 5 stages of grief 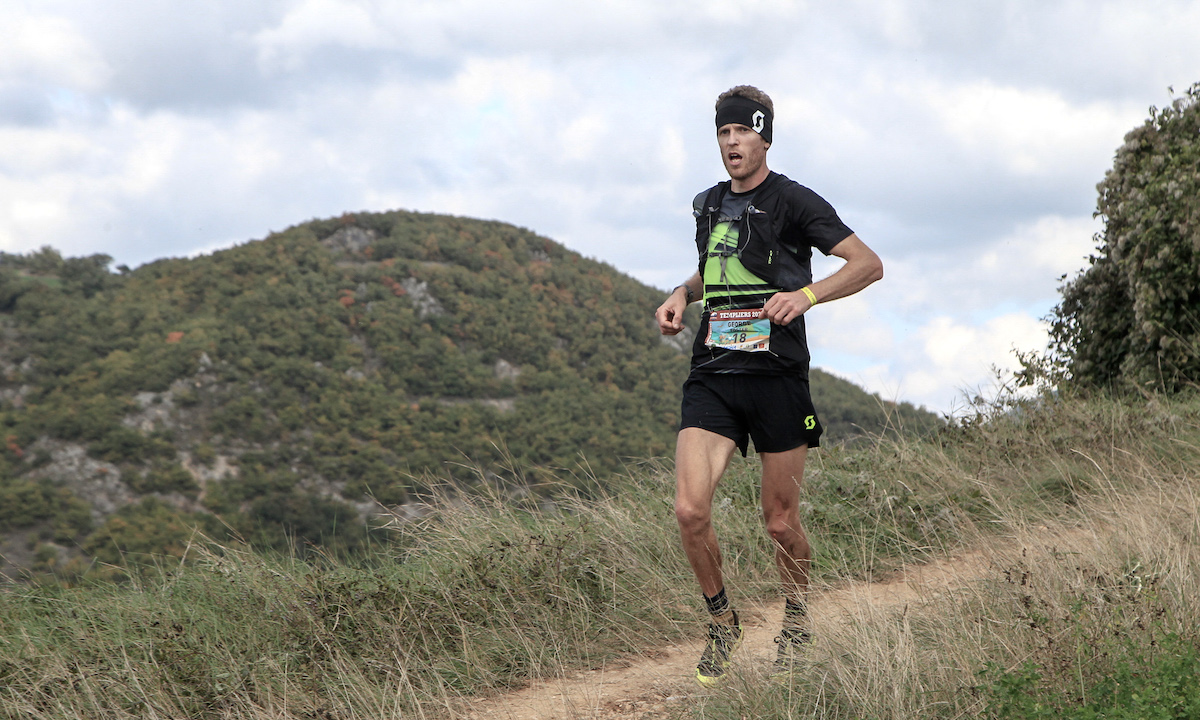 George Foster reflects on the season and his latest excellent run at le Grand Trail de Templiers in France.

Recently I returned from a short sojourn in France where I was running in ‘le Grand Trail des Templiers’, an 80k trail race with 3600m of elevation gain, as part of the aptly named ‘Festival des Templiers’ in Millau, Occitanie. It was my second ‘ultra’ distance trail race of the year and my second ever.

At this stage in my thinking, tired from 20 hours driving and sheltering in a cafe in the incessant rain of north-west England, and now given the postponement (again!) of the World Championships until November 2022 and the subsequent imposition of re-selection, it may be my last ‘ultra’ too, such is the degree of energy, both mental and physical, that it takes out of you.”

After my first ultra, the 100km Lakeland Trails race in July, I read a comment on the England Athletics Endurance Twitter feed regarding the use of the race as a trial for the GB trail running team from one user stating, “What a waste of money. That’s hardly athletics. Tell me their best 5k 10k times.” A lot of hard work unseen

A hurtful and harsh statement given the effort and dedication that we put into the sport; back-to-back 4, 5 and 6 hour training runs in the mountains squeezed in on weekends ‘off’, long uphill tempo sessions, 100-mile+ training weeks all while trying to hold down a ‘normal’ life with the pressures of a full-time job, relationships, family etc. What could you expect from Twitter though I guess?!

In my inexperience of these distances I feel that I am able to bring a degree of ignorance that lends itself to a unique take on what it is like to race them. During the 7+ hours it took to race ‘Le Grand Trail’ on Sunday I had a lot of thinking time.

My thoughts circulated in a fashion that I now realise was popularised by the vision of psychiatrist Elisabeth Kubler-Ross in a theory known colloquially as ‘The 5 Stages of Grief’. My internal dialogue in the race went as follows…

Surely we can’t be running this fast only one kilometre into an 80 kilometre race? Are 3 minute kilometres normal? Shit, I hope not. Ah, here’s the first climb, phew. Good we’re slowing a bit…to 5 minute kilometres, on a 3 kilometre climb with an average gradient of 18%. We’ve hit the top and are immediately back into 4 minute kilometres. Is this what death feels like?

Fuck, this IS what death feels like. Why are people forcing the pace this much? What is wrong with them? Chill out guys, we’re less than 10 kilometres in and have a long way to go. Whose idea was this? Why aren’t my legs working?

Okay legs, just get me through to the 50k mark in a respectable time and then we’ll just take each kilometre as it comes, right? We’re at the 50k mark? Okay, quick body assessment, we’ve done 50k with 2100m climb in 4 hours 18 minutes, no wonder I feel a bit rough. Lets just get to the next aid station / hill top / flat bit / kilometre / fuck it, tree (!) and we’ll re-assess ok? Can you do that legs? Oh no, is that cramp?

Only 30k left to go. Wait. How much?!? Nearly 20 miles and I’ve been on the go for over 4 hours already. Oh man, this sucks. I’ve been running on my own for the last hour. I’ve gone off course, costing me three or four crucial minutes.

My soft flasks weren’t at the right aid station. My poles are missing at one of the aid stations. It’s all going to shit. I won’t even finish top-20, let along top-10, my secret goal. What’s the point? What, actually, is the point? This isn’t ‘athletic’. If someone comes past me now I won’t be able to go with them. The cramp that was a memory of races long past is here. It’s in my calves and hamstrings on the flats, and in the quads on the uphills and downhills.

Come on legs, FFS. This. Sucks.

Well, fuck it, this is it. There’s the top of the very last climb. I’m walking it. Top-10 is not happening now, I’m close but not enough. I think, if my rusty French is to go by, that I’m in 11th. There’s one final, fast and frantic downhill to go all the way to the finish line. I won’t be dropping out now obviously so let’s just get it done eh?

This last ‘descent’ has a bit more climbing in it than I thought. Is that someone behind me? See you mate, well done, good luck to you, I can’t hang with you. I’m. Done. We’re unsure what stage this runner is in, but it’s a beautiful spot for any of them. Photo: George Foster

Coming back for more?

This race has a reputation for being fast. An athletic course that draws the best mountain runners in the world, Robbie Simpson (no slouch on the roads, with a Commonwealth Games bronze medal in the marathon), Jon Albon (winner of countless races of all distances), Ruth Croft (mountain running royalty) to name just three.

This is a BIG deal to a lot of people.

Will there be more ‘ultras’ in the future? Who knows.

I like the idea of them; I love running and being out for as long as possible doing such is obviously hugely appealing. They take a heck of a lot out of you and require an immense amount of dedication. Can I sustain this in the long-term?

Frankly, I’d do it for runners of all abilities and distances just to shut up the Twitter naysayers. We’ll let out legs do the talking.