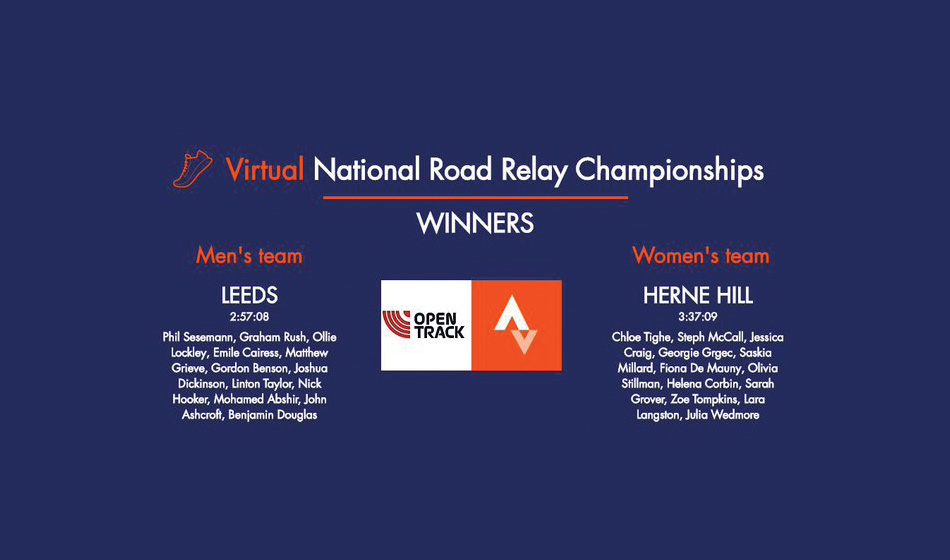 With the National Road relays an important fixture for many clubs, when the 4th April event was cancelled due to Corona Virus, James McCrae, Jonny Currie, Massi Dondani and Mark Hookway were the driving forces behind the National Virtual Road Relays.

The idea was simple. Sticking to government guidelines club runners had to go to a local route and post the fastest 5k they could for the club. Men’s 12 stage and women’s 6 stage would be the 12 and 6 fastest of each club, respectively, to score. Initially they expected 3-400 runners, but over 5000 got involved and so far £8,000 has been raised for NHS Charities.

The race must go on

The racing was close, with the usual suspects at the front of the pack. There was a window from Saturday to Wednesday for runners to upload their efforts and it meant a little bit of back and forth on the podium as some of the team stars posted late entries on the Tuesday and Wednesday. If you fancy a live commentary of the men’s race then Jake Shelley can talk you through it here.

Leeds City, with their great strength in depth, led from the second leg, but Cambridge and Coleridge nearly caught them on the last leg, with Marc Scott finishing like a train, but Emile Cairess held off the charge of the new European indoor 5000m record holder. Third place went to Tonbridge AC, who have been a feature in many national club championships in recent years.

The women’s 6 stage event was another closet fought battle with Herne Hill Harriers showing their strength to prevent Leeds City from repeating their 2019 road relays double, with the Yorkshire club having to settle for second in the ladies.

Third place City of Norwich AC held off regional rivals Cambridge and Coleridge AC and hopefully they’ll have a rematch at the Round Norfolk Relay in September.

The full results, including age group teams and the first women’s 12 stage, can be found here on OpenTrack. It’s worth noting what a cracking job the online platform did in adapting to this situation and making it possible at short notice.

As we normally have a weekly top ten, this week we felt the virtual efforts of individuals would be worth highlighting.

The road relays are a club event and it’s the just important that the 12th man or 6th woman runs well as the first, even those just outside the scoring in these events could have featured if someone ahead had to stop for some social distancing or if one of the club’s top runners were at altitude.

The fastest of the bunch was Lucy Reid, leading Tonbridge AC home with a 16:19, whilst the quickest chap was Grant Sheldon, with a huge improvement on his official PB with a 13:38. It’s at this point we shall remind everyone to have a peek at Alex Bampton’s article on why we might be seeing some quicker times.

There are some who feature in the top ten who’s clubs did not feature in the relays as a full team, but interestingly the women’s winners, Herne Hill Harriers, had their best, Chloe Tighe with 16:44, was 11th overall. It was their team consistency that put them atop the pile with five runners in the top 30.

If you would like to run faster at a virtual run, then parkrun top tips to help runners of all abilities might help. They can be found here.