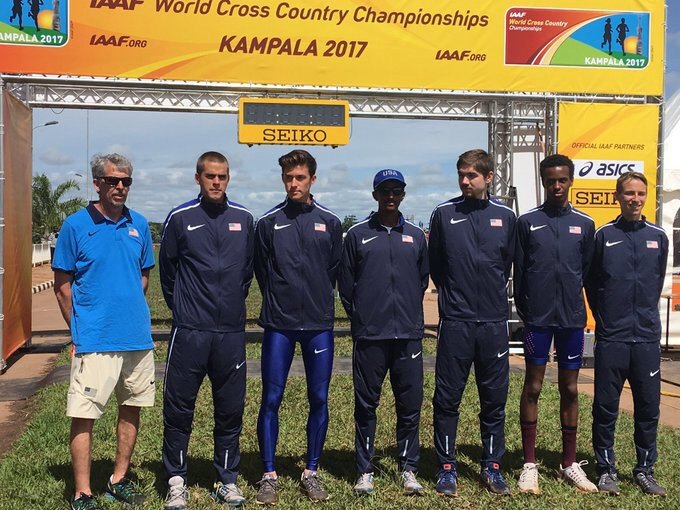 A strong USA Team, took to the field on Sunday for the IAAF World Cross Country Championships, in Kampala, Uganda.

Heading out to the championships, the team hoped to achieve a podium place, from either the senior men’s, or the senior women’s team.

However, despite the strong efforts, a podium place was just to far out of reach, with Team USA achieving two fifth-place team finishes in the senior men’s and women’s races. Disappointing as it was, Team USA can hold their heads high, as all of the athletes showed great commitment and determination, in their respective races.

Here are some of the reactions from Team USA.

Cory Leslie, First Leg
“Even when we handed it off to Paul, we thought that he would give us a sliver of hope—he’s that special.

On if the heat had any effect…
“It’s a 2k, so the weather had no effect. I felt that all of our teams were ready.”

Paul Chelimo, Anchor Leg
“I was trying to cover that move like crazy but it is what it is. Everybody tried [their] own best.

On his performance…
For me, I just wanted to see how fast i could close the last 2k. It’s a training run. I want to get stronger. Everyone went out and did their best, nothing more you can do.”

Michelle Magnani
“It was an interesting start. I thought the race got recalled, so I was walking. I was like okay, I’m in last but it’s a long race. It was hot out. [I was] trying to catch as many people as I could [in the final lap].

Aubrey Roberts
“Michelle thought it was going to be a false start. We heard some whistles which aren’t typical of any U.S. races, but in the end, I don’t think it made a difference.”

Logan Morris
“That was a crazy race. We all thought we were going to get called back. It’s a good thing we came to Kampala early…I felt better running each day I was here.”

Megan Murray
“It was pretty tough for me. There are a lot of great athletes here, and happy to be here.”

Kristen Garcia
“I was not definitely feeling my best. Just making it was the goal. No matter the result, I’m happy to be here.”

Madison Fruchey
“It went out a lot faster than I expected. I got back into the race, but the logs were still kind of awkward. It was a fun race, and I really enjoyed the experience.”

Paul Roberts
“I just kept moving up for the first two laps. We talked about [how] we need to move up on the third lap. So I just tried to hook on… just one at a time, one at a time.

Isaac Harding
“I might have gone out just a tad too fast. The whole time I was just trying to stay focused and strong. [I learned] to kind of stay relaxed on the first 2k. Just gives you perspective of the kind of competition out there.”

Aidan Reed
“It was challenging. I underestimated the heat. I kept reminding myself to fight, and I told myself to not let myself off the hook. I told myself to suffer for my teammates ‘cause they were suffering for me.”

Alec Haines
“It was hot and grueling, and I kept trying to push.”

On the difference between World XC and collegiate races…
“I feel that they go out slow in college races. My plan was to be conservative. My first 2k was around 5:40, and seemed everyone died out there. I just had to string my way through it.”

Aliphine Tuliamuk, 15th
“I was hoping for a top 10 finish, but a top 15 finish is still okay. Today didn’t go as planned. I think I have so much in me, but it didn’t quite work out today. I don’t think I’m close to the top 10 women, but I’ve been there before.”

On what’s next…
“I think I’m going to take a month off of racing and get in some solid training.”

Sarah Pagano, 30th
“My goal was to put myself in the top 30. I was struggling over the last 2 laps. I’m not sure how we ended up as a team, but we put ourselves in a good position. We really had a good team vibe overall with this group of ladies.”

Elaina Balouris, 48th
“[It was a] tough day, but I knew my job was to try and beat as many people as I could.”

Stephanie Bruce, 22nd
“[Today] was awesome! That was the most amazing, tough, and incredible race I’ve ever been a part of. The U.S. team came out as wild cards and surprised some people. I wanted to get out and establish good position. The heat was oppressive, but there was a lot of energy from the crowd.”

Natosha Rogers, 23rd
“[Today was] extremely challenging. I think we were well prepared, since we ran at Bend; just a different temperature.”

On what was the most challenging…
“The last 4k, just staying focused and not letting people pass…I knew we were in contention for the podium.”

Leonard Korir, 20th
“It was tough today. Compared to the races I have run, that was the toughest one. I said, you know it’s tough, but let me give everything I’ve got so I can go forward, knowing where is my strength and where my weakness [is].

Sam Chelanga, 11th
“I just told myself, ‘let me just try and do my best’. We tried to stay together, but the pace got hot. I was pretty happy with my performance, I came here wanting to represent the USA. Once the pace got out and I couldn’t see anyone from the USA ahead of me, I just wanted to go and try and get anyone ahead of me. It was one of those races where you just have to fight, and I did.”

Stanley Kebenei, 26th
“I think we waited well, so we’re just going to go back motivated next year and try and win.”

Scott Fauble
“It was a pretty tough race. Anytime you run a 10k, 80 degrees, 80 percent humidity, 4000ft, it’s going to be really hard. And then if you add a 60 second quarter at the start, it was just a combination of hard stuff.”