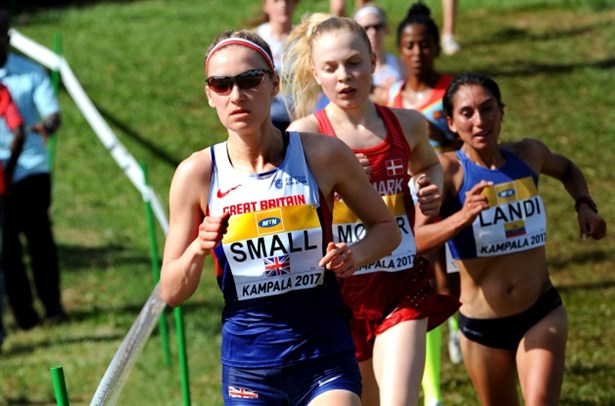 On Sunday GB athletes competed in the IAAF World Cross Country Championships in Kampala, Uganda. Athletes lined out in the senior women’s, U20 women’s and U20 men’s races.

On her international debut, Louise Small secured a top 40 finish in the senior women’s race, while Victoria Weir and Sam Stevens finished as the top Britons in their junior races with 40th and 43rd place finishes respectively as the GB team put in a determined showing.

For Small and her fellow senior women’s team members Claire Duck, Rebecca Murray and Emily Hosker-Thornhill, the anticipated quick-fire pace from the gun saw the field of 106 split in a near instant, with each of the quartet working hard throughout to pull back places.

As the five laps went on and the 10km race drew to a close, it was Aldershot, Farnham & District athlete Small who did the most when it came to working her way through the strung out field effectively and efficiently for an eventual 38th place finish, while European Cross U23 team gold medallist Murray also impressed to claim 42nd as she transitions into running as a senior athlete.

Afterwards Small, reflected on the race: “It was tough and it was hot out there, but I’m proud of the way we battled as individuals and as a team.

“The pace was quick from the off, but obviously we expected that to be the case, so it was a case of making sure we kept our cool and ran our own races regardless of what was going on in front or behind. Overall I’m pleased with the finish, and both the race and the championships have been a fantastic experience.”

In the men’s U20 race, won by Uganda’s Jacob Kiplimo in front of a rapturous home crowd, Leicester’s Sam Stevens worked his way through the field over the course of the three 2k laps to eventually claim a highly respectable 43rd place finish as he, like many, debuted at the World Cross Country Championships against stiff opposition.

With the sextet of junior men largely sticking together as a pack for the first lap-and-a-half of the 6km race, it was Stevens, Scott Beattie (Mike Bateman) and Inter-County champion Jonathan Shields (Michael Thompson) who led the way for the British Athletics team, with the sight of the trio swapping places something of a regular occurrence in the earlier stages of the race.

Only when the bell came did Stevens make a push forward as the heat began to take its toll on many competitors, and as the home straight beckoned it was he who pushed on to claim a finish inside the top 45, with Beattie four places and nine seconds behind for 47th place.

Commenting on the race, he said: “As a team we played the race out to go off steady and I think we did that. As we went through the race we tried to move through as individuals and a team, but obviously it’s so difficult to not drop off out there.

“I’m pleased overall though – I was ill at nationals, then I wasn’t quite at it when it came to Inter-Counties, so I really wanted to just come here and kill myself out there on the course, and I 100% feel like I did that.”

Elsewhere in the race, Shields took 60th; Hugo Milner was 69th, despite a niggling injury throughout; debutant Luke Prior (Simon Prior) finished 80th; and Ben Davies (Simon Goodwin) came home in 87th.

In the first race of the day to feature British athletes, the women’s U20 race, Victoria Weir (Bud Baldaro) was the first Briton over the line for a noteworthy 40th place in another impressive showing on what was her first global competition in a British vest.

At the 2km point of the U20 women’s 6km race Weir was sat at a mid-way point between the middle and back of the field, but a resilient final lap saw her move through the field to snatch placings back from the 104-strong field in determined fashion.

Speaking on a challenging course and temperatures of 27 degrees, post-race Weir said: “You train to be able to run hard, so in that aspect the course is fine because you’re used to running hard, but for me I hadn’t really adapted my training to the heat. I think if I was to do another course like this in these conditions I would definitely be changing aspects of my training as a means of preparation.”

On her first international vest and representing GB for a third time, she concluded: “I can’t even describe it – last season I didn’t even do cross country and was unsure about continuing to run competitively, so to start University after a really good track season and be able to be given the opportunity to represent your country, which was a life-long dream, three times in almost as many months [European Cross Country & Great Edinburgh XCountry] is almost indescribable.”

Also in the midst of the field for much of the race were Scottish duo Gillian Black and Anna MacFadyen, as the pair eventually settled for 46th and 48th place finishes on their British Athletics debuts. In the same race, Tonbridge’s Phoebe Barker (Richard Owen) was 57th on the back of good work undertaken in the earlier stages of the race, and Wales’ national U20 champion Cari Hughes (Andrew Walling) claimed 64th.

Unfortunately Amelia Quirk did not finish the race as she withdrew at around the 3km point.