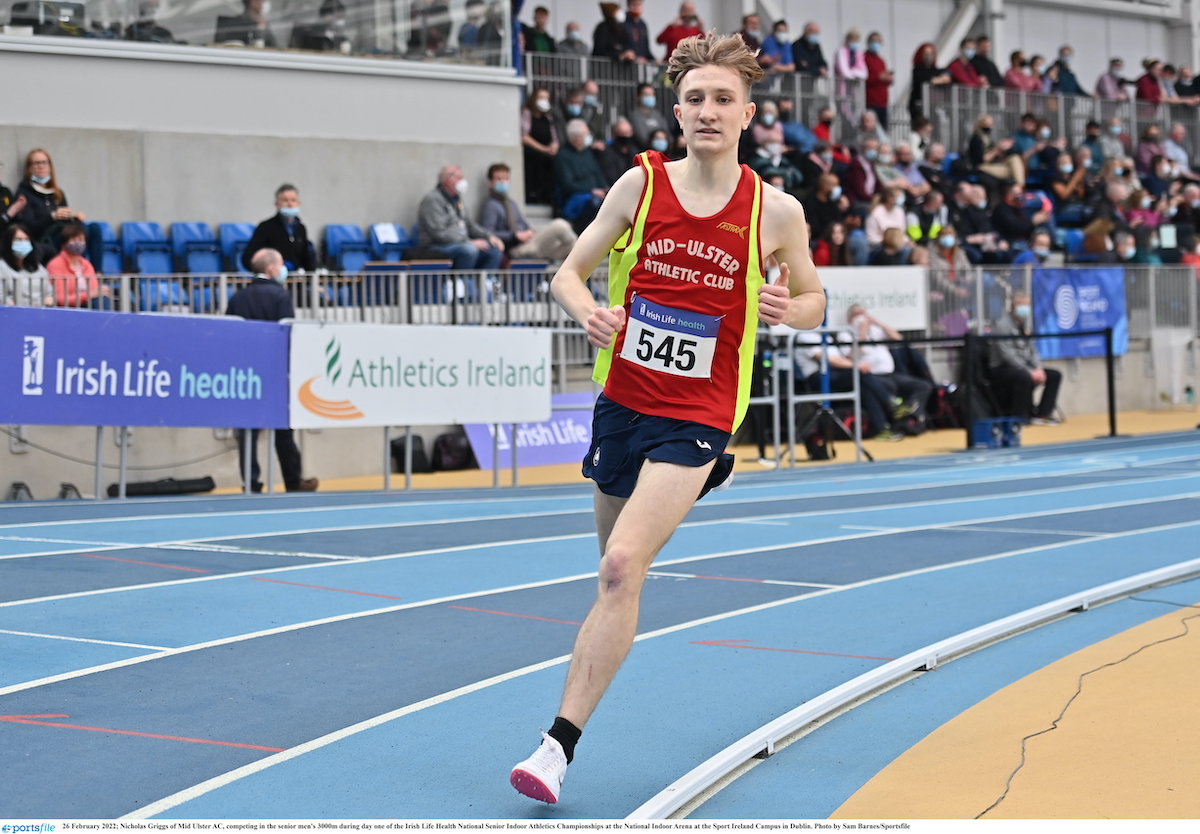 26 February 2022; Nicholas Griggs of Mid Ulster AC, competing in the senior men's 3000m during day one of the Irish Life Health National Senior Indoor Athletics Championships at the National Indoor Arena at the Sport Ireland Campus in Dublin. Photo by Sam Barnes/Sportsfile

More action from indoors, outdoors, on road and in the mud for Irish athletes. Lindie Naughton reports.

Hugh Armstrong of Ballina AC clocked a time of 63 mins 59 to finished 19th in the Ghent Half Marathon on Sunday (March 13).

Locally, Jake O’Regan of the St John’s Club in Co Clare made it three victories in as many weekends when he led home 1,389 finishers from all over the country at the Bohermeen Half Marathon in Co Meath, on Sunday (March 13).

O’Regan’s time of 64 mins 52 saw him finish comfortably clear of Conor Duffy of Glaslough Harriers who finished second in 65:53. Over a minute behind for third place in 66:59 was Martin Hoare of Celbridge AC.

First woman in 75:14 was Olympic steeplechaser Michelle Finn of Leevale AC. Second in 78:59 was Sheila O’Byrne of Sli Cualann AC, while third and first W40 in 79:46 was Natalie Hall of Victoria Park and Connswater AC.

In a well-supported team competition, Donore Harriers, led by Eoin Durkan 14th, were the winners of the Fr Delaney Cup for the best men’s team with its six counters all home inside the top 49. Clonliffe Harriers were second and Trim AC third, with 28 teams finishing.

Brothers Pearse AC, led by Dee O’Keeffe in tenth place, took the Rennicks Cup for the top women’s team, with its four finishers inside the top 35. A stunning thirty-seven women’s teams completed the race — worthy of a National championships.

Also on Sunday, Neil McCartan made it a home win for race organisers East Down AC at the annual Jimmy’s Ten in Downpatrick, which had an entry of close to six hundred runners.

McCartan completed the 10km course in 30 mins 52 secs, putting him half a minute clear of Owen Carleton of Annadale Striders who crossed the line in 31:23 and was first M35. On a good day for East Down AC, Aaron McGrady finished third in 32.02. Despite that, Newcastle and District AC pipped East Down for the team prize, with Ballydrain Harriers third. First woman in a solid time of 33 mins 14 secs was Emma Mitchell of Clonliffe Harriers. In second place was Sinead Murtagh of Newcastle and District AC who finished in 36:34 and was also first W40. Third in 38:23 was Eimear McCracken of City of Lisburn AC. East Down took the team honours ahead of Willowfield TH and Murlough AC.

22 seconds across the first five in Killeagh

Leevale athlete Montague was a clear winner two weeks ago over 10 miles at Kinsale but on this occasion the margin couldn’t be closer as both she and runner-up Sharon Rynne of the Kilmurry-Ibrickane club were credited with the same time of 23:58.

In third was another Leevale runner, Nadine Forde, in 25:18 with local Midleton athlete Eileen Leahy having a good run to take fourth in 26:00.

Meade of St Finbarr’s AC had won the MTU 5km a week earlier but, like Montague, had a tussle on his hands as just 22 seconds covered the first five. His winning time of 20:40 put him eight seconds ahead of Leevale’s Donal Coakley.

James McCarthy of East Cork AC showed a return to form when taking third in 20:59, three seconds ahead of Michael Herlihy of North Cork AC.

Organised by the local GAA club, the race certainly wasn’t a rip-off as for an entry fee of €10 there was an extensive prize list along with the return of the welcome after-race refreshments and excellent changing facilities.

Winners of the half marathon were Myles Gibbons of Sliabh Bhuidhe Rovers AC in 74:47 and Lucy O’Malley in 88:11.

Mick Fogarty of Ferbane AC in 15:21 and Portlaoise’s Mary Mulhare in 17:06 were the winners of the Tullamore Harriers AC 5km, which was another Sunday race. First W50 was the ageless Pauline Curley of the host club in 18:33.

Reed proved the quality of the field finishing in 52 mins 9 secs and also first M45. Second in 53:54 was Reed’s clubmate Allan Bogle. Tenth and first woman was Jessica Craig in 56:53. After a six-month absence due to injury, Yared Derese of Carrick Aces AC returned to racing at Sunday’s Glaslough 5km, which he duly won in 14 mins 45 seconds. Second in 15:00 was Conor Maguire of Monaghan Phoenix AC.

At the UK Intercounties Cross-Country Championships in Loughborough, the NI and Ulster men’s team finished a creditable second behind Surrey.

In the women’s race, Claire McGuigan was 31st and Robyn McGee 39th of 274 finishers.

Rebecca Rossiter from Ulster and Scott Fagan from Leinster were the winners of the senior races at the All Ireland Schools Cross-Country Championships held in wet and windy Mallusk, Co Antrim, on Saturday (March 13).

Both races were packed with Irish junior international athletes. Rossiter from Down HS beat Roise Roberts of Dominican Fortwilliam and Emma McEvoy of Loreto St Stephen’s Green in the girls’ 3.5 km race, while finishing behind Fagan in the boys’ 6km were Dean Casey and Niall Murphy, both from St Flannan’s Ennis.

Finish of the day came in the boy’s inter 5km where Lughaigh Mallan of Rathmore GS just made it home ahead of Sean Lawton of CP Bantry, with Peter Farrell of St Flannan’s Ennis a pace or two adrift for third. Team winners were Colaiste Mhuire Mullingar by four points from Rathmore GS, with St Colman’s Fermoy third.

Emer McKee of OLSP Knock and Noah Watt of Campbell College made it an Ulster double at minor level, where the winning schools were the Pres Kilkenny girls and the Naas CBS boys.

The end of the season for mud

In the 2021-22 NI and Ulster Cross Country League, the Annadale Striders men and the Newcastle and District AC women came out top of their respective tables.

In the men’s league, Annadale, with 144 points from their best six results, finished clear of North Belfast Harriers 128pts and North Down AC 120pts.

Newcastle and District AC accumulated 132 points to top the women’s table ahead of North Down AC 128 pts and North Belfast Harriers 126pts.

So endeth the cross-country season! Performance of the week indoors came from 17-year-old Mid-Ulster AC athlete Nick Griggs who set a new European U20 record of 3:56.40 for the indoor mile at the NIA Live meet held at Abbbotsown on Thursday (March 10).

Griggs finished second in the race, only a step behind Andrew Coscoran of Star of the Sea AC, who finished in an excellent 3:56.27. He was smashing the existing record of 4:02.33 set by Britain’s Robbie Farnham-Rose in 2013. Griggs’ time was just shy of German Fernandez’ world U20 indoor record of 3:55.02 set in 2009.

At the National Junior and U23 Indoors in Athlone on Sunday (March 13), middle distance highlight of the day was a championships best time of 1:51.86 in the junior men’s 800m for Ferrybank’s Callum Hurley.

Across the Atlantic indoors

Brian Fay of Raheny Shamrock finished sixth in the 5000m at the opening day of the NCAA Division I Indoor Track and Field Championships in Birmingham, Alabama on Friday (March 11). Barry Keane finished 11th in 13:35.01.

17 July 2021; Rhasidat Adeleke of Ireland after winning gold in the final of the women’s 200 metres during day three of the European Athletics U20 Championships at the Kadriorg Stadium in Tallinn, Estonia. Photo by Marko Mumm/Sportsfile

In the women’s 60m heats, Rhasidat Adeleke of Tallaght AC broken the Irish 60m indoor record with a blistering time of 7.17 secs.