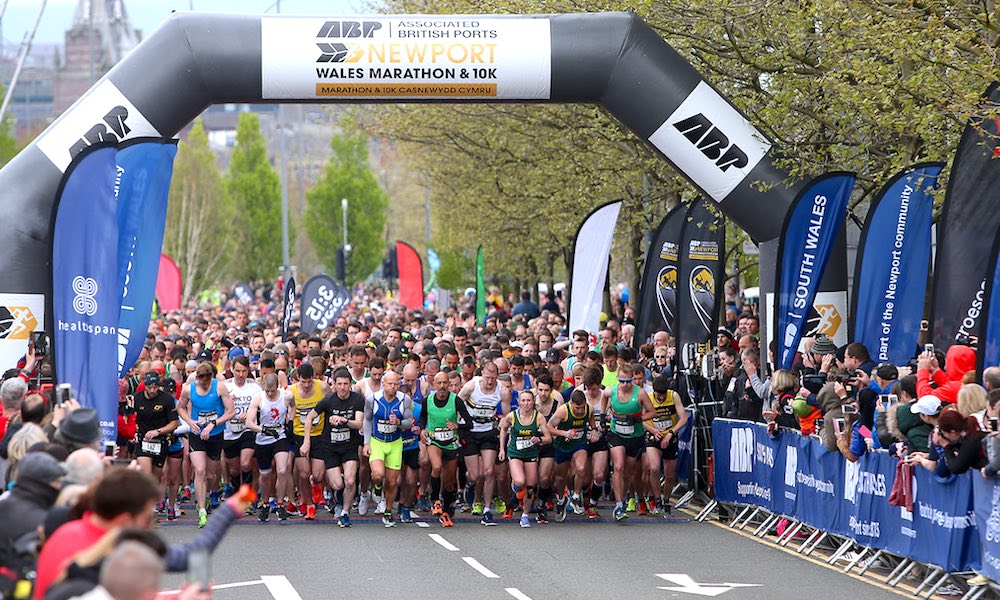 Neath Harriers’ Carpenter stripped a massive 15 minutes off his previous best to win the men’s crown at the inaugural ABP Newport Wales Marathon on Sunday (April 29).

Carpenter’s 2:33:32 win was the first competitive victory of his career as he put in a vital burst 7K from the finish to finally break the resistance of brave Jonathan Barnes. Slowly, but surely, he created a gap and eventually came home 41 seconds ahead of the Cheltenham & County Harrier.

In the women’s race, local hero Cockram of the Mickey Morris Racing Team, beat her previous best by more than four and a half minutes.

“I am really chuffed with that – it is the first win of my career,” said Carpenter, who is a regular on the parkrun circuit in south Wales. “I will definitely come back in the future, although I will enjoy this first.”

Carpenter averaged 5.52 minute mile pace across the 26.2 miles and reached half-way with the Cheltenham & County Harrier Jonathan Barnes in 77:11.

Marathon debutant Luke Williams was back in third some 44 seconds off the pace, with Time Iveson a further minute behind.

Second-placed Barnes also ran the race of his life as he stripped more than 15 minutes off his previous best, coming home in 2:34:13. San Domenico Running Club member, Williams, was third in 2:37:22.

There was also a massive step forward for Cockram as she took the women’s title in 2:44:58 to win by more than 14 minutes. It was a major triumph for last year’s Welsh Trail Half-Marathon champion given here recent run of injury problems. Eryri Harriers runner Andrea Rowlands finished second in 2:59:00 with Carla Swithen just outside the three-hour mark in 3:02:06 for third.

“I only got one 20 mile race in my training since my last marathon in October and that was last week. I haven’t done much running since January,” said Cockram, who spent four years at Tulsa University.

“I’ve been doing three-hour stints on the cross-training machine and three hours on the bike to keep fit and I just came into the race hoping for the best. I’ve had Achilles tendonitis and a knee niggle.

“I got injured at the Commonwealth Games training camp and I wasn’t expecting a PB. The crowds were fantastic and carried me through.

“This is the best win of my career and I’ll be back next year looking to break the 2:40:00 barrier.”

The ABP Newport Wales 10K attracted a high-class field and gave Commonwealth Games and World Championship steeplechaser Ieuan Thomas the chance to blow away the cobwebs following his return from the Gold Coast 10 days earlier. That gave him a 72-second winning margin over Morgan Davies, of Swansea Harriers, who was second in 30:55.

There was a local athlete on the podium in Abed Teweldebrhan, of Newport Harriers. He finished third in 31:32.

“The time bonus was in the back of my mind up to 5K. I had a plan to go out and try to run around 15 minutes for 5K and I came through in 14:48 feeling pretty good,” said Thomas.

“At that stage, I felt the 29:30 time bonus target was achievable, but in the end, it was just a little bit too windy.

“I was out on my own and I couldn’t maintain my rhythm, but I had great fun and the support was amazing. It was awesome seeing the streets lined with so many supporters and hearing all the drummers.

“The atmosphere really was fantastic and it really urged me on. The Gold Coast is definitely now out of my system after that.

“I can’t remember shivering so much on a warm-up before a race. Everyone was making fun of me for saying how cold it was, but I’ve been a little bit spoilt after six weeks in Australia.”

Rachel Felton, of Shaftesbury Barnet, was the first woman home in 35:04 to improve her recent third place at the Brecon Carreg Cardiff Bay 10K. “I had a less than ideal build-up to this race and I even e-mailed the organisers on Thursday to say I probably wouldn’t be able to run,” explained Felton.

“I hadn’t run for two weeks, but I wanted to see what sort of shape I was in and so I changed my mind in the end. I felt good and I was happy with the time.

“There was a bit of a breeze, so I tucked in behind the men, but the atmosphere was really nice and I will definitely be back. It was well organised and I really enjoyed it.”

Emma Stepto of East Cornwall AC, was second behind Felton in a time of 36:09, while Cardiff AAC’s Lucy Marland was third in 36:17.