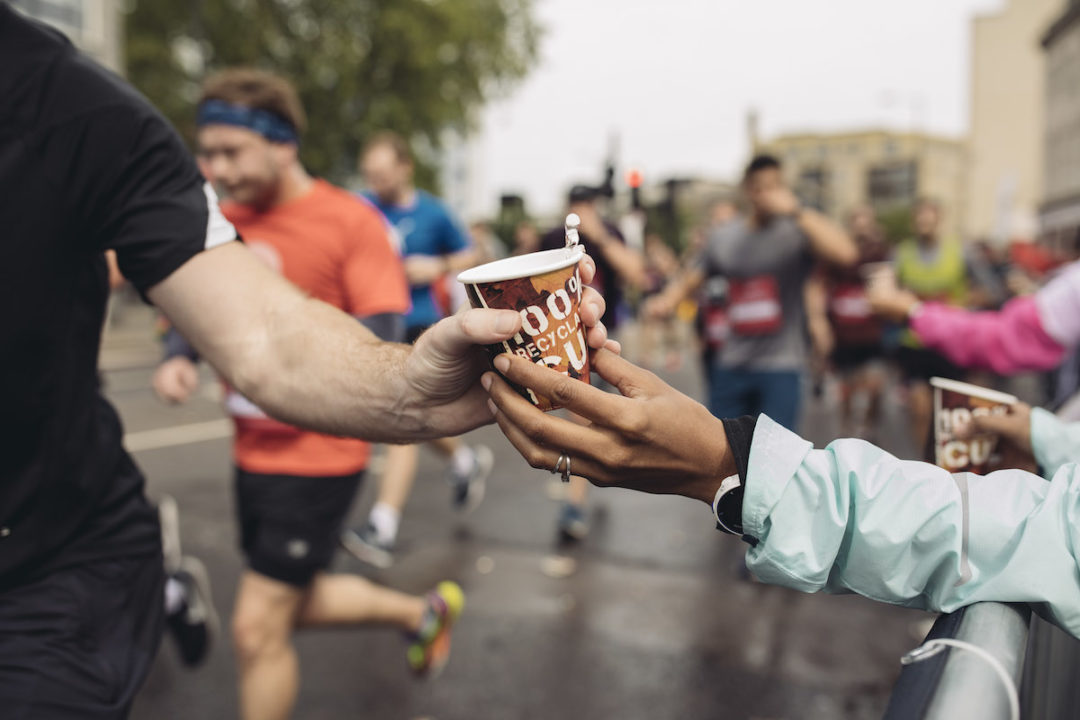 Thousands braved the wet to run the fast, flat 13.1 mile route that kicked off in Oxford City Centre and took runners past the world-famous museums, iconic city streets and parks.

It wasn’t the fast times (although they were impressive) and the amount of Nike Next % shoes that impressed us at Fast Running, but the biggest improvement made on the day by Virgin Sport, making the race plastic bottle free.

Virgin Sport has successfully eliminated 500,000 single-use plastic bottles from the routes of its three UK races (Hackney Half, ASICS London 10K and Oxford Half) and replaced over 25,000 plastic kit bags with long-life natural cotton tote bags.

It’s great to see a bigger race company like Virgin Sport taking such a progressive step towards making their races more sustainable. Using recycle-able cups at all of their checkpoints didn’t stop anyone running personal bests and makes a big different on the impact the race has on the environment.

Do you need that t-shirt?

As one of the questions ReRun Clothing ask is whether we need finishers t-shirts so we asked and they were interested to hear about ReRun’s work. They did say that sister race “ASICS London 10K finisher’s t-shirts were made using recycled PET bottles. One of ASICS’ projects that also includes collecting used gear and partnering with organisations such as Worn Again to support technical development and scale up the recycling of used textiles into new textiles.

We like the move Manchester Half took by removing the race finishers t-shirt and explaining why on their website here. After having “wastage of over 100kg of leftover t-shirts [in 2018] heading off with no owner isn’t something we were comfortable with.”

That’s 12,000 plastic t-shirts removed from the equation by Manchester Half and 500,000 single-use plastic bottles removed by Virgin Sport. It’s great to see races being proactive and making a difference. Keep up the good work.

RELATED: ReRun Clothing ask “Do you need that race t-shirt?” The Oxford Half itself and what the winners said

The 2019 Oxford Half male winner Alex Milne ran in just 01:07:31. “This my third time racing the Oxford Half. I finished second here twice before so really pleased to come back and get the win! It’s a great course. Amazing for PB’s. I’ve run a personal best on this route twice now.”

Stephanie Davis completed the course in 01:12:58 for the women’s win, a fantastic result and PB for the 2:32:38 marathoner. It will be exciting to see to how this improvement can translate to the 26.2 mile distance for Davis.

“I won the Hackney Half two years ago. I’m so pleased to have won Virgin Sport’s two half marathon races! Thank you to everyone that came to support us, it was a huge boost especially in this weather.” Cara Waller, Events Manager, Sobell House Hospice Charity, said: “This year we’ve had an amazing response with over 400 runners taking part for Sobell House. Collectively they have so far raised an incredible £50,000 which will go towards caring for people in Oxfordshire with a life- limiting illness.”

Joshua Sowerbutts, Running Events Coordinator, Alzheimer’s Society, said: “We have been blown away by volume of interest we have received for this event. This year we have seen our team double and are looking to exceed our target of £50,000.”

Jessica Frey, CEO, Virgin Sport, said: “Thank you to all the local spectators, vendors and businesses that supported us – it’s the community spirit in Oxfordshire that makes today a very special event in our calendar. The 2019 edition of the Oxford Half Marathon was the most sustainable to date and had the biggest charitable impact with double the number of charity runners and partners from 2018.”

The Oxford Half was the third event produced by Virgin Sport in 2019 following the sell-out Hackney Half Marathon on 19th May, and ASICS London 10K that took place on 21st July.