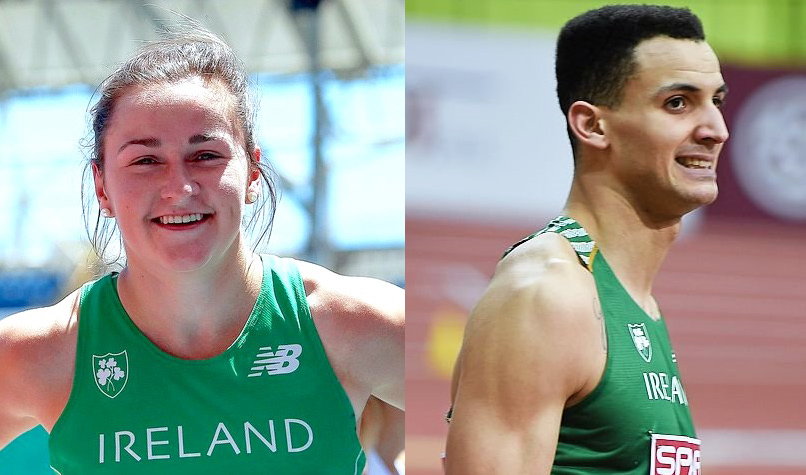 Fantastic performances from Phil Healy and Adam McMullen proved the highlights of a packed day of indoor athletics on Saturday January 27.

Bandon’s Healy not only knocked a full second off her 400m personal best in Vienna on Saturday, and her time of 52.08 was the fastest 400m of the year so far – confirming her as a 400m runner to be reckoned with.

“I am delighted with the run, training has been going really well and I felt there was a good time in me,” Healy said afterwards. “My target is the World Indoor Championships and I remain fully focused on delivering my peak performance at this championships”

As for McMullen, his 7.97m for the long jump was not only a Northern Irish record but sees him edging ever closer to the magic 8-metre mark – and to Ciaran McDonagh’s Irish records of 8.07m outdoors and 8.00 indoors.

McMullen will compete for Northern Ireland and the Gold Coast Commonwealth Games in Australia this spring.

In other races, Anita Horvat of Slovenia and Eilidh Doyle of the UK ran times of 52.24. and 52.34 respectively.

McMullen, whose primary target this season is the Commonwealth Games in April was having a busy few days. Last Thursday, he had opened his season with a 7.77m at an indoor meet in Ostrava.

At the same meet, Ben Reynolds of North Down, also heading for the Commonwealth Games, ran a time of 7.93 secs for sixth in his 60m hurdles heat – not far off his best of 7.73 secs.

The Commonwealth Games is also a top target for multi-eventer Kate O’Connor who was in action at Jordanstown and won the shot with a heave of 12.66m. Results can be found here.

Athlone IT hosted the second round of the National Indoor League, which included a number of open events. Highlights included a 3000m time of 8:03.45 for Kilkenny’s Eoin Everard; 12.93m for triple jumper Sarah Buggy of St Abban’s, 2.10m for high jumper Barry Pender, also St Abban’s, and 4:22.56 for Amy O’Donoghue of Emerald in the 1500m.

The DCH women and the Clonliffe men top the points tables. Full results can be found here.

On Thursday last, Dean Adams of Ballymena went top of the Irish 60m rankings with a winning time of 6.82 secs at the NIA Live meet in Abbotstown – his fastest this season. Junior athlete Efrem Gidey of Clonliffe clocked a time of 8:54.61 for 3000m.

Running half that distance were the women, with Rebecca Wallace of Lagan Valley AC coming home first ahead of Newry’s Esther Dickson and Kerry Bamber of Ballymena Runners and North Down the best team.

In the women’s race, Catherine Diver of Beechmount Harriers beat Letterkenny’s Fionnuala Diver and Cathy McCourt, who is not attached to any club at the moment. Hannah Shields of City of Derry Spartans was first W50 and Noreen Bonner of Finn Valley first W60. Full results can be found here.

In England at the Northern Cross Country Championships, Armagh AC’s Danielle Fegan finished eighth in 32:17 over the 8km course.

Paralympian Patrick Monahan of Le Cheile AC failed to finish the wheelchair race at the Dubai Marathon on Friday January 26 after taking a wrong turning with a kilometre to go.

Monahan wasn’t too despondent.”Decent splits, first 5km in just over 10 mins, 44 mins at halfway. Now back to the cold for some hard training to prepare for upcoming races starting in March.” The race was won by Marcel Hug of Switzerland in 1:25.14.