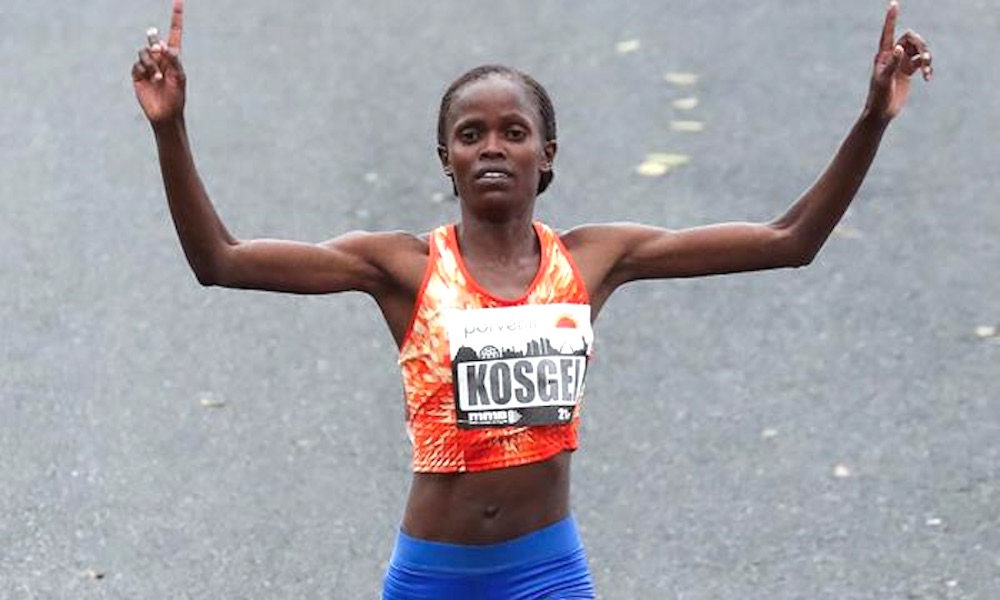 Setting off like she was on a mission from the very start, Kosgei crested the finishing tape in 2:14:04 (unofficial). This is, for me, a better performance than Kipchoge’s 1:59:40 in Vienna yesterday. Simply fantastic running.

From the first 5km split it looked like something very special could be on, with the 64:28 half marathoner (although that was at the Great North Run and not record eligible) going through in 15:28. That’s around 2:10 marathon pace, although she settled into 2:14 pace and went through halfway in 66:59.

When the pacemakers dropped away around the 30km mark some expected the Kenyan to slow down, but that wasn’t the case at all. The 30-35km split was 15:57 and that’s just four seconds slower than Mo Farah ran for the same segment, albeit a few minutes earlier.

Jonathan Gault, of LetsRun.com, reported on Twitter that Kosgei then went on to run her 24th mile in 4:45, which is sub 2:05 marathon pace. That speed so late in the race is simply phenomenal. 40km passed in 2:07:11 and at this point you start to believe that this weekend marathon history is really being made.

The men’s race was won in 2:05:45 by Lawrence Cherono, in a sprint finish with Dejene Debela, Asefa Mengstu and Bedan Karoki. Sir Mo Farah finished in eighth position in what must be a disappointing 2:09:58 for the 2018 winner.

It was anyone’s win coming into the final stretch, but Cherono had the legs of the other runners and all four finished within eight seconds.

Farah was off the pace of the leaders by half way, running 62:54 and forty seconds back from the lead. It may not sound like a lot, but it’s a lifetime when there are six world class marathoners in the lead pack. Farah had training partner Bashir Abdi for company, but the Belgian pulled away in the second half and went on to finish fifth in 2:06:14.

It is worth noting that both Kosgei and Cherono are managed by Federico Rosa and Associati. The Italian athlete representative was also responsible for representing Abel Kiprop, Jemima Sumgong, Matthew Kisorio, Agatha Jeruto and Rita Jeptoo, all of whom have been banned for doping offences. In 2016 Rosa himself was charged with doping offences, but the case was later dropped by authorities in Kenya.

Irish international Fionnuala McCormack finished an excellent fifth in 2:26:47 to take a huge chunk off of her 2:30:38 PB from Boston marathon earlier this year.

The cross country star is a runner who seems suited to the hard work and grind of the marathon distance and it was great to see her pass through halfway in 1:12:56 and hold strong for a 2:26:47 finish.

We believe this puts McCormack third on the all time marathon list for Ireland, behind Catherina McKiernan (2:22:23) and Irish born Australian international Sinead Diver (2:24:11), although technically McCormack’s mark is second all time as Diver ran her time representing Australia.