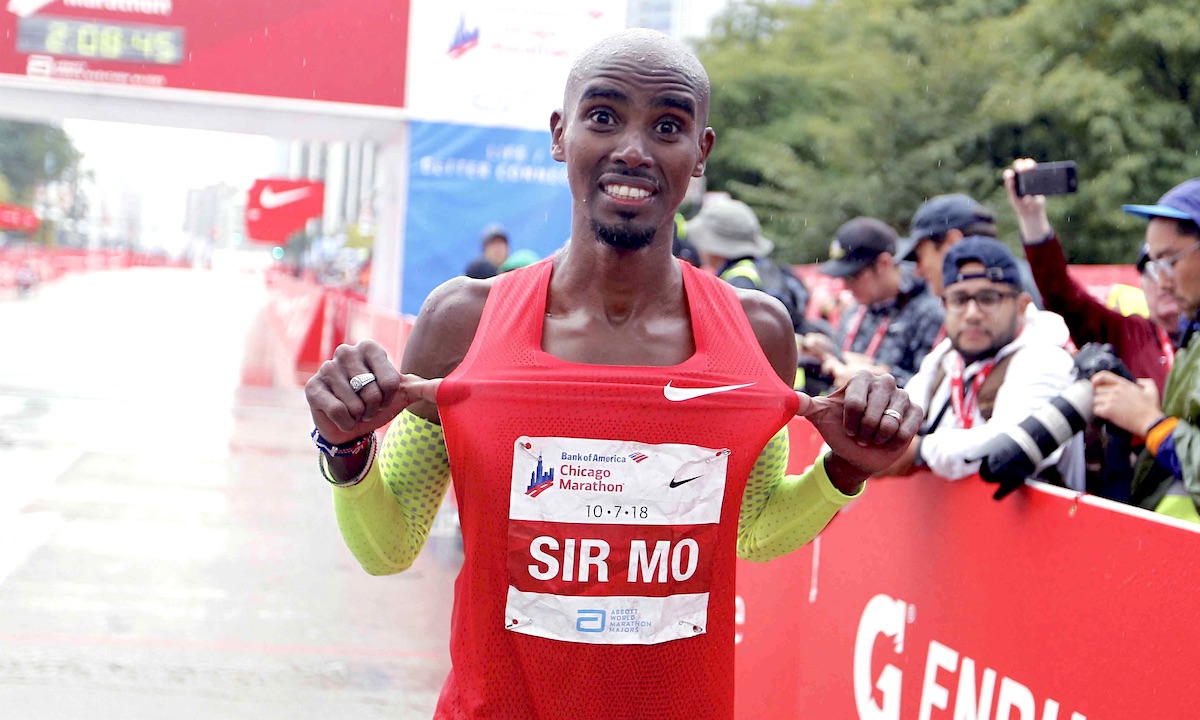 Farah runs superbly in only his third marathon as Brigid Kosgei wins the women’s race in Chicago.

A dominant Mo Farah set a European record of 2:05:11 in recording his first win at the distance at the Bank of America Chicago Marathon on Sunday (October 7).

The Brit moved rapidly away from Ethiopia’s Mosinet Geremew in the final kilometre, eventually crossing the line 13 seconds clear to clock the fastest ever time by a non-African on a record-legal course.

Wearing a ‘Sir Mo’ bib and looking easy all of the way, Farah produced massively negative splits of 63:06 and 62:05 en route to taking 37 seconds off the continental mark held by Sondre Moen.

Congratulations to Brigid Kosgei, the female winner of the 2018 #ChicagoMarathon, with an official time of 2:18:35! pic.twitter.com/h2Gko17f5q

The first half was a little slower than anticipated as a group of 13 runners went through led by Kenya’s Geoffrey Kirui in 63:03. The two favourites, Farah and defending champion Galen Rupp, as well as twice world champion Abel Kirui were among them.

Rupp dropped off the increasing pace at around 37km and soon Farah had only Geremew, this year’s Dubai Marathon winner, for company, as Kenya’s Kenneth Kipkemoi and Japan’s Suguri Osaka followed closely behind.

Farah looked effortless and ready to pounce and he left it until around 600m to go before moving easily away from the Ethiopian, having plenty of time in the finishing straight to wave his arms in celebration.

Taking 70 seconds from the British record he set when finishing third behind Eliud Kipchoge in London this year, his time has only been beaten on record-ratifiable courses by Ethiopian and Kenyan runners. He also holds the European records at 1500m, 10,000m and half-marathon.

Farah said afterwards: “The conditions weren’t great and everyone was thinking about conditions rather than time, but towards the end we picked it up.

“I felt good towards the end of the race. At the beginning I felt a bit sluggish but overall I’m very happy with it.”

In his third serious attempt at the distance, the 10-time outdoor global champion has confirmed himself as one of the world’s best marathoners.

He has not shown himself to be in the same class as recent world-setter Kipchoge but possible match-ups in the World Championships next year and Olympics in 2020 are eagerly awaited.

Kosgei was in a group of five at the front at 25km, joined by compatriot Florence Kiplagat and Ethiopians Roza Dereje, Shure Demise and Birhane Dibaba.

Kosgei pulled clear in the 32knd kilometre from Dereje and Demise and by 35km was already 45 seconds clear. A subsequent 5km split of 15:47 (2:13 marathon pace) put the result beyond doubt and the woman who was second in Chicago last year and in London this year finally had a major marathon win, not to mention a PB of 1:38, to celebrate. Dereje was second in 2:21:18 and Demise third in 2:22:15.

Former world triathlon champion Gwen Jorgensen of USA was a notable finisher in 11th in 2:36:23, four places ahead of UK-based Dane Jessica Draskau-Petersson, who ran 2:44:11.

American Joan Samuelson, the first ever women’s Olympic champion, was 16th at the age of 61, her 3:12:13 being outside the targeted world age-group record.

British Olympian Alyson Dixon was a late entry to the race, but dropped out after going through 25km on course for 2:36. Paul Piper was the second Briton overall, clocking 2:25:47.