Mo Farah and Charlotte Purdue win The Big Half 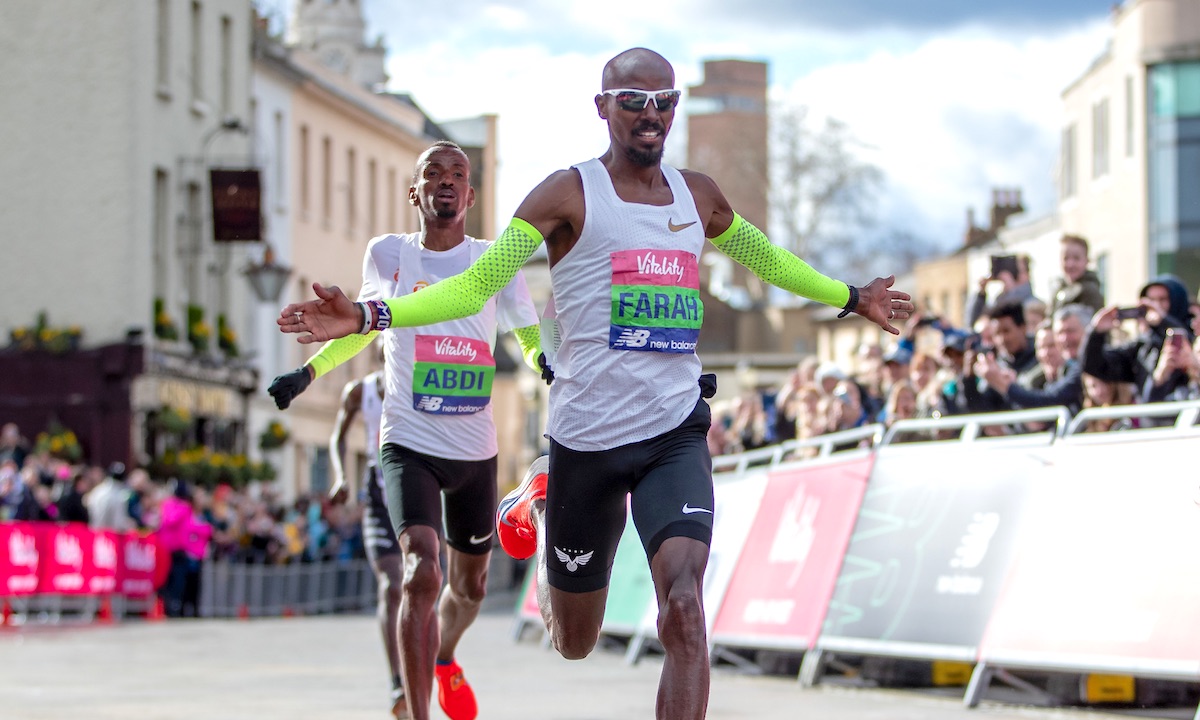 Mo Farah and Charlotte Purdue took the victories at The Vitality Big Half on a bright but windswept morning in London on Sunday (March 10).

Starting by Tower Bridge, with The Shard in the backdrop, the race got underway with Farah, Wilson Kipsang, Bashir Abdi and Daniel Wanjiru straight to the forefront, with Dewi Griffith soon joining the lead pack in the men’s race. Following a first mile split of 4:25, the leading group of five stretched out as they came out of Limehouse tunnel and it was soon down to a group of three, featuring European marathon record holder Farah, Belgium’s Abdi and Kenya’s Wanjiru.

By mile five, Farah found himself five to 10 metres off his challengers but soon closed the gap and at mile seven as the trio came through in 32:50 before clocking 37:35 at mile eight.

Farah, who returned to the UK from training in Ethiopia on Thursday, was now right where he wanted to be, sitting on the shoulder of his rivals, and ready to produce his trademark kick.

With the finish line in sight at the iconic Cutty Sark, Farah duly unleashed his kick in a sprint finish to successfully retain his Big Half and British half marathon crown in 61:15.

Farah’s training partner Abdi crossed the finish line for second in 61:16 ahead of former London Marathon champion Wanjiru in 61:17.

Crossing the finish line in fourth place for British silver was Welshman Griffiths in a time of 63:17. Chris Thompson finished fifth in a time of 63:41 for British bronze ahead of two-time London Marathon champion Kipsang in 64:07.

After the race, Farah said: “The conditions weren’t great today so I’m pleased to win, although it would have been nice to run a bit faster and really test myself. I’m happy with the win and with how my preparations are going ahead of the London Marathon in April.

“I got a bit of stomach cramp at one point but it cleared up. It’s always great to race in London. I love racing on the streets of London; the crowds are amazing. I’m going to spend the next few days with my family then I head back to Ethiopia to continue training.

“The London Marathon is still quite a long way away but I’m happy with my progress and it was nice to be able to race today.” In the women’s race, it was no surprise to see the British quartet of Charlotte Purdue, Lilly Partridge, Charlotte Arter and Steph Twell leading the charge from the off, with Hayley Carruthers on their shoulder.

As the race progressed, Twell, Arter and Purdue had a slight lead during the first couple of miles, before the gap between the trio started to stretch out between mile five and six, with only Twell maintaining the pace nestled within a group of British male club runners.

Purdue, who was the winner of the inaugural Big Half 12 month ago, was now running alone in second with Arter finding herself in a similar position in third place.

Twell, who completed a special double last month after adding the Scottish cross country crown to the English title she won in 2010, had a sizeable lead during the early stages of the second half of the women’s event.

However, Purdue patiently worked her way back into contention before taking charge of the race with a few miles to go.

Purdue, fresh from half marathon PB of 69:46 in Japan, aggressively kept her foot on the accelerator and showed no signs of slowing down as she opened up a gap of 20 or 30 metres on her Aldershot clubmate Twell with a mile to go.

As the race approached the finish line Purdue had a commanding lead and took the win in 70:38 almost a minute ahead of Twell, looking in superb form ahead of next month’s London Marathon. With Purdue successfully defending her Big Half and British half marathon titles, Twell took British silver in a personal best time of 71:33 ahead of Welsh record holder Arter in 71:44.

Continuing to make a mark after her late start to competitive running was Carruthers in fourth place, running a big PB of 71:57 ahead of Partridge in fifth.

Following two impressive half marathon performances in recent months, Purdue has shown that her training set-up in Australia with a strong group – that includes 2:25 marathoner Sinead Diver – is paying dividends. “It’s brilliant to get the win,” said Purdue afterwards. “The weather was really windy so I knew it wasn’t going to be a really quick day.

“Some of the athletes went off really quick, but I knew they’d come back to me because the conditions didn’t indicate really fast times – so I followed my own race plan, and it paid off.

“It’s great to retain my title. I won here last year, and to win again is really good.”

In the Wheelchair races, there were victories for GB’s David Weir and Dutch athlete Margriet Van Den Broek.

The top men’s and women’s results are below.