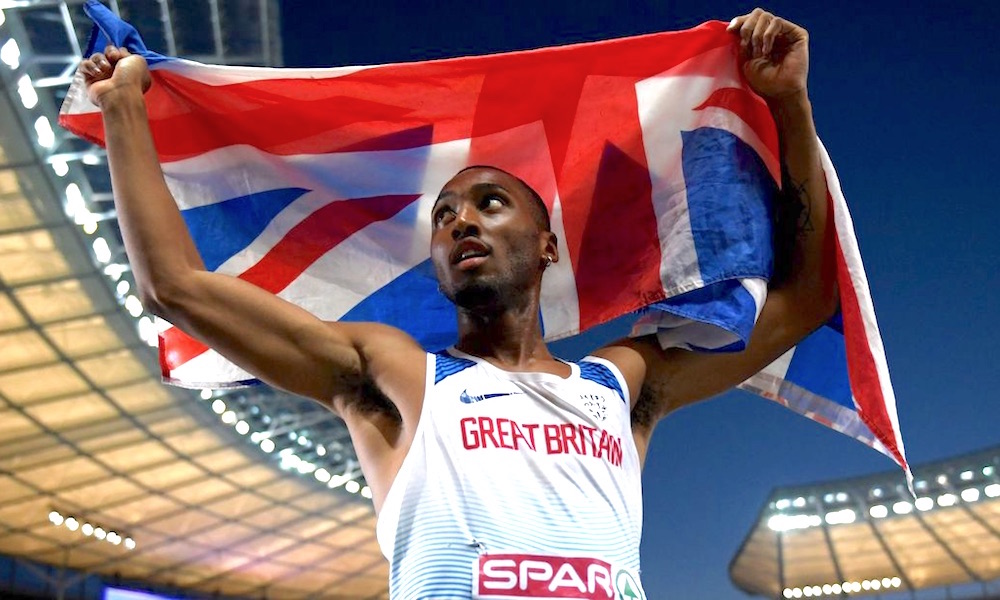 It was a top evening for GB athletes with Hudson-Smith storming to gold in the men’s 400m, Johnson-Thompson securing silver and personal best in the heptathlon and Meghan Beesley and Jake Wightman claiming women’s 400m hurdles and men’s 1500m bronze respectively.

Wightman finished superbly down the home straight to clinch bronze in a race won by 17 year-old Norwegian star Jakob Ingebrigtsen. A full report from a memorable men’s 1500m final can be found here.

European No.1 coming in, Hudson-Smith lived up to the billing, running a hard and strong first 200m to take a sizeable lead over the rest of the field at a packed Olympiastadion in Berlin, before holding off pressure from the Borleé brothers from Belgium to win in 44.78.

It is the third consecutive year that the European 400m title has been won by a British athlete, following Martyn Rooney, who claimed successive victories in 2014 and 2016. Hudson-Smith said: “I got to the last 50m and my legs had gone. That was crazy; I will never do that again.

Hudson-Smith said: “I got to the last 50m and my legs had gone. That was crazy; I will never do that again.

“It feels amazing, but oh my god that lactic – it hurt. But a win’s a win and I’m just happy I got it. For me personally, it was about the win. The [British] record is going to come. It’s just a matter of time. It’s not an ‘if’ it’s a ‘when’. And I did push for it, but I wanted the victory more and I got that. It’s all that matters.

“I paid for the semi-final a little bit today but it proved there’s a big time in there, everyone knows I can do it. I got the victory, the first title, at end of the day, I said before the race if I ran 48 or 42, I just want the win; titles mean more to me than times.”

Meanwhile, Johnson-Thompson set a new personal best score of 6759 points as she claimed a superb silver medal behind Belgian Olympic and world champion Nafi Thiam in the heptathlon, describing her performance as the best of her career. She required a winning margin of around 13.5 seconds to take victory from Thiam in the 800m finale but the Belgian came in just under ten seconds behind the Brit to deny what would have been her third major title this year.

Johnson-Thompson sat in second position heading into the final event and clocked 2:09.85, ending just 57 points behind Thiam, who claimed gold in a world leading 6816 points.

“It’s very hard to front run and I’ve found that out now so I need to put some work in there, but anything can happen in athletics and in sport. I feel like I can do it – I believe in myself and this is going to be good for me moving forward.”

A welcome surprise for Beesley

Beesley surprised everyone inside the Olympiastadion as she clocked 55.31 to take the bronze medal in the women’s 400m hurdles, with Eilidh Doyle eighth in 56.23.

The Birchfield Harrier pushed hard in the opening 200m and found another gear on the home straight to hold off the challenge of Hanne Claes (BEL) to secure a medal.

She assessed: “I know that I’m short and that running in lane one would help with my stride pattern. I had to commit but I do think it helped me. It’s not like I’m a six feet odd girl that needs to do the strides. I just thought I’d go for it and my coach told me to 100 per cent commit and then give it everything I got and put it to the max.

“It’s the first final I’ve got to for GB as a senior so I just thought this is my time to prove that I can perform well in finals. I haven’t been injured now since April last year. It’s the longest I’ve ever been so I just think it’s about that and moving coaches. My new coach Mike Baker has helped me with the mental aspect and I feel more confident now.”

Wightman rounded off the evening’s proceedings with bronze in the men’s 1500m, despite being at the tail end of the field until 300m to go. A great move from the 24-year-old saw him pass Norway’s Henrik Ingebrigtsen in the home straight and pull away to secure a medal in 3:38.25, 0.15 seconds away from winning gold won by 17-year-old Jakob Ingebrigtsen.

Wightman added: “I’m relieved to be fair – that was the most pressure I’ve put on myself at any championships – you have no idea what’s going to happen and the way people have been running up to this point meant that it was a pretty exciting race for people to watch.

“It was a pretty amazing experience going into the final 100m with us Brits and the three Norwegians attempting to win it. If you ran that race 100 times there would be 100 different outcomes.”

Tracey found herself in a strong position on the shoulders of the leaders with 200m to go and despite seeing a gap, found the door closed in the final metres, as she missed out on a medal by 0.06.

Like the men’s 1500m final, there were three Brits in the women’s 800m medal showdown, however, Lynsey Sharp and Shelayna Oskan-Clarke were outside the podium positions too in sixth and eighth respectively.

There will be no British representation in the final of the men’s 800m as the British trio of Guy Learmonth, Daniel Rowden and Elliot Giles all missed out on a spot in the automatic qualifying places.

Morgan Lake had to settle for seventh in the women’s high jump after clearing a best of 1.91m while Naomi Ogbeta’s first-round effort of 13.94m (0.1m/s) saw her finish 12th in the women’s triple jump.

Earlier in the evening, three British athletes secured their place in the final of the women’s 200m, led by newly-crowned European 100m champion and world leader Asher-Smith.

The Brit followed up her victory in the 100m by clocking 22.33 (1.1m/s) to qualify fastest, with Bianca Williams coming through in the same heat as a fastest loser in 22.83 (1.1m/s) after finishing third.

British champion Beth Dobbin fought herself into second place with a strong final 50m in the second heat, ensuring she qualified in 22.84 (1.4m/s) but Jodie Williams missed out on joining them, finishing fifth in 23.28 (0.2m/s).

After qualifying, Asher-Smith said: “That was quite comfortable, surprisingly. I’m happy with it, but it’s obviously all about tomorrow. The last couple of days have been strange – obviously having a new PB of 10.85 has been insane, but for me it’s mainly been about sleeping and trying to get some recovery in – I knew I had to come out here and do the best that I can.”