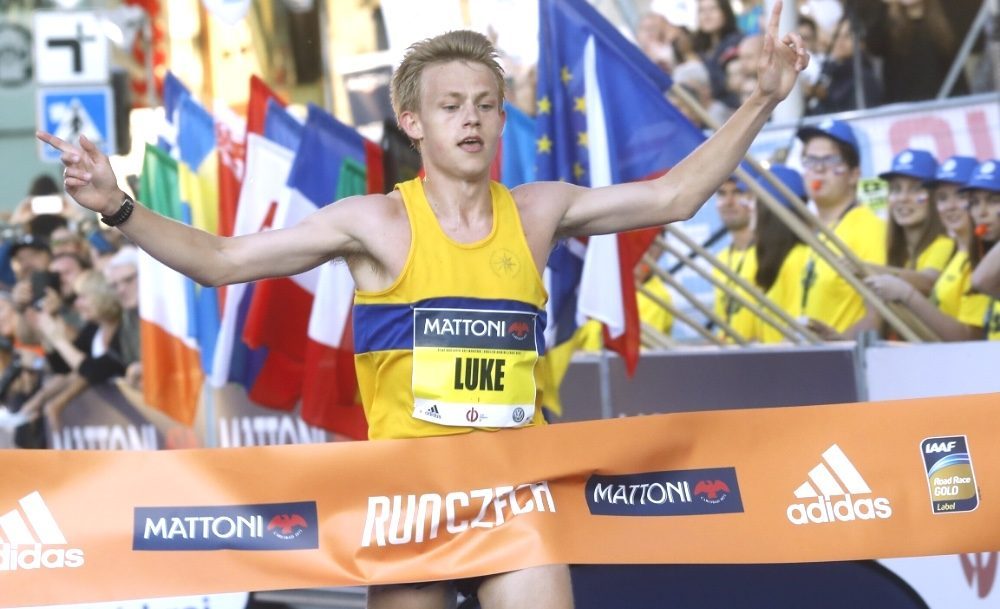 The Scottish runner takes the honours at the European athlete only half marathon in České Budějovice.

Luke Traynor ran 63:42 to become the first ever European winner of the Mattoni České Budějovice Half Marathon on Saturday evening (June 2).

Traynor, who clocked a personal best 61:57 earlier this year in Barcelona, finished 23 seconds ahead of Ukranian Roman Romanenko (64:05) with Austria’s Valentin Pfeil completing the podium in 65:08. Irish Olympian Mick Clohisey finished fifth in 65:40, while GB’s World Championships marathoner Josh Griffiths was 10th in 67:21.

The IAAF Gold Label in the South Bohemian capital is the second of two races in the Czech Republic that only invited European elite athletes this year in order to the promote the development of athletics across the continent.

The EuroHeroes initiative was started by well-known race organisers RunCzech after recognition that long-distance running in the past few decades has been dominated by East African runners. RunCzech said in the statement earlier this year: “Their success has resulted in many dominant victories and world records overshadowing commendable performances by other athletes.

“Amid such incredible African stars, Europe has struggled to find its own heroes. The media and, therefore, the public no longer pay attention to local elite runners whom fans and athletes can identify with and whose performances should serve as inspiration for the next generation.”

Carlo Capalbo, President of the RunCzech Organising Committee and Chairman of the IAAF Road Running Commission, said: “We want to devote our top quality events in Karlovy Vary and České Budějovice to discover new heroes and to create local legends that will inspire others to take up sport and lead an active lifestyle.”

Back to the race, and British international Traynor along with Ukraine’s Romanenko, winner of the previous RunCzech race Mattoni Karlovy Vary Half Marathon in May, ran together at the front for the majority of the race before Traynor made his move the final kilometres.

“We ran together right from the start, Roman kept up with me for practically the whole race, but I felt I had a bit extra to give and in the end managed to speed up a bit,” said the Giffnock North athlete after his victory. “Although I’m a bit tired, I have to say I really enjoyed the race, the atmosphere was fantastic, with loads of fans along the course and I’m also delighted with my finishing time.

“Even though my personal best is two minutes faster, it’s still a good time on this course which is a tad tricky.”

The EuroHeroes initiative is supported by European Athletics and in the organisers statement in March, European Athletics President Svein Arne Hansen said: “It is very important that European athletes get more opportunities to race at the top level in road races across Europe and EuroHeroes is a fantastic initiative to encourage and promote our road race stars on the continent.”