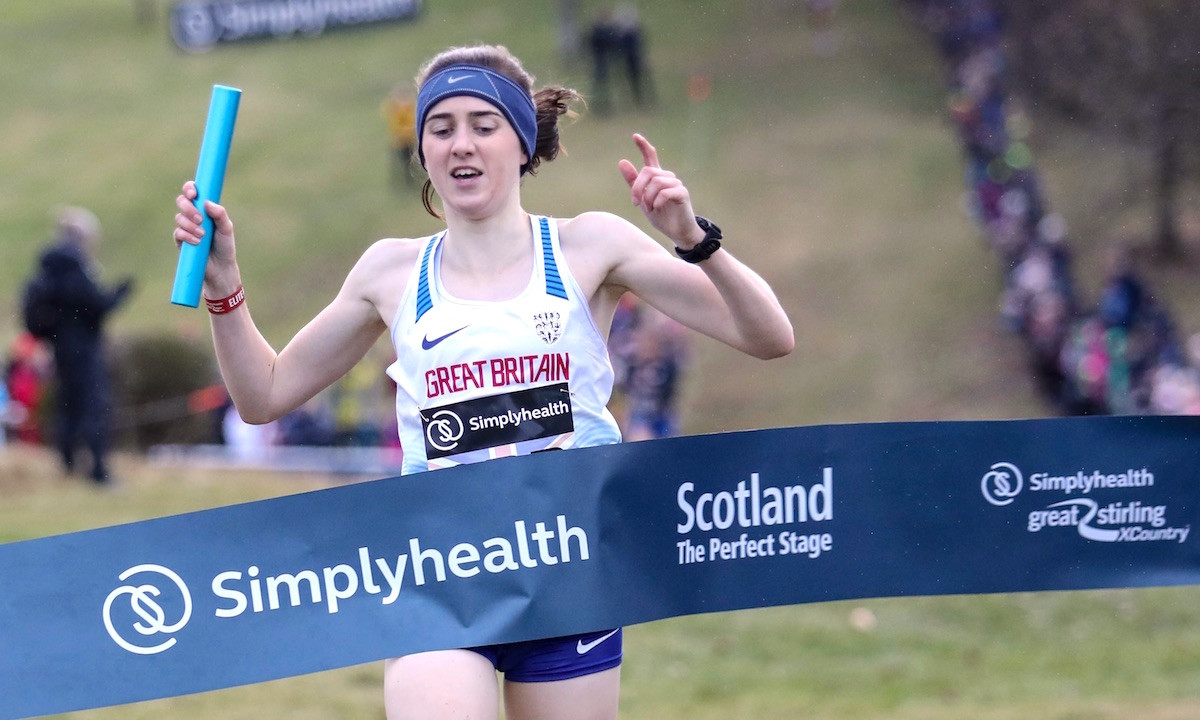 Laura Muir, Alex Bell, Phillip Sesemann and Jamie Williamson all ran fantastic legs in the mixed relay to take victory for Great Britain in the final event at the Great Stirling XCountry (12 January).

It was a windy day in Stirling as the Scottish city hosted the cross country international between GB, Europe and the USA for the first time after moving on from its long-standing home in Edinburgh. Under the watchful eye of Stirling castle the racing was on a rolling but firm cross country course at city’s King’s Park golf course.

The overall match was won by Europe, but that does not paint the full picture of an exciting day of cross country running with drama in the men’s race, a strong home result in the women’s event and a fine British win on the mixed relay.

The women’s race was the first international event, with four laps of a 1500m loop. Featuring some nice ups and downs, the early pace was set by Kate Avery of Great Britain with the pack tightly bunched. GB’s Charlotte Arter then took charge of proceeding with a break and looked strong before German Elena Burkard, representing Europe fought her way back into contention.

The race between the two was close, but the German steeplechaser pushed on with Arter starting to struggle.

Burkard, who is next heading off for a cross country skiing training camp, looked composed and strong throughout the final stages and finished in 20:01 to take the win, just five seconds clear of Arter. The Danish Anna Emilie Møller added third for the European team in 20:11, chasing Arter hard at the finish.

Britain’s Pippa Woollven was fourth with Verity Ockenden in fifth, both having great performances.

Drama in the men’s race There was drama in the elite men’s race, which was fast from the start with Europe’s Hugo Hay pushing the early pace. In a turn around from the women’s race, the USA team were at the front in force and when the break came it was five men, including two former event winners in Edinburgh, Garrett Heath and Leonard Korir.

As the race progressed, USA’s Hillary Bor, Heath and Korir were in a small group with Sweden’s Napoleon Solomon and Spain’s Adel Mechaal for Europe. Bor looked really comfortable in the front but the format of the race, four 1500m laps, followed by two 1000m laps added some extra excitement towards the end.

A new lap format to tackle when all the runners were pushing and tired from earlier exertions led to Bor and Korir both taking a wrong turn and getting tangled up in the side ropes. Both went from first and second to fourth and fifth and had to chase back to the front. Bor easily got back onto Solomon’s shoulder, but Korir had to work little harder.

Watching fans were asking whether Bor and Korir’s chase back to the front would affect the finishing sprints.

Salomon, who was fifth at the European Cross country last year, showed a downhill push before the final uphill that seriously challenged Bor, but USA’s man was too quick and held on for the victory. 1500m specialist Adel Mechaal came through for third place as Korir seemed to suffer the most after the wrong turn.

The British team didn’t have the strongest of performances, but young Patrick Dever ran with the lead group for a lot of the race and was the first British runner home in ninth place. The Preston Harrier is certainly one to watch for the future.

The mixed relay race was the final event of the day and it was essentially USA v Great Britain v Spain with a Spanish quartet competing for Team Europe. Meanwhile, Great Britain was represented by three of the quartet from the European Championships along with European 1500m champion Muir.

Blasting off with a men’s leg first, the pace was electric with GB’s Jamie Williamson running strongly. However, it was USA’s Craig Nowak, a 3:39 1500m man, who finished the first lap ahead of the field. Europe were second home, closely followed by Great Britain’s senior and junior teams.

Another error with the course meant that the USA’s runner was reeled in by GB’s Alex Bell, who might well have caught the American regardless as she was running brilliantly on the day.

GB was in the lead at the end leg two with Bell passing the baton to a fellow Andy Henderson coached athlete Phillip Sesemann. It seemed the European team were gaining, but Sesemann finished with a flourish to provide an excellent advantage to his teammate Laura Muir for the final leg.

Home favourite Muir set off on the final leg with a steely, focused look in her eyes, and was resolute as she stormed around the final lap to claim the win for GB.

Interestingly Muir and Bell both clocked the same time of 4:38 around the 1500m loop, while GB’s men also ran the exact same time in 4:10, a stat that highlights just how well the team ran to win the mixed relay with a 17:36 total.

“The team did fantastically, they were unlucky at the European Championships in that they slipped and it was fantastic to see them build up such a strong lead for me, and then I thought ‘well there’s no pressure now!’,” said Muir after winning a fifth consecutive mixed relay title. “All credit to the team, they did a fantastic job of getting me into a good position and it’s as much of a team win as it is an individual win for me.

“I take the crowd in more than I would on a track, there’s people there from school and Glasgow and running alongside that are all shouting things. It’s nice to run and be so close to the crowd and having little kids running alongside you is really fun. It [the course] was a challenge but it was proper cross country and it was good fun.”

Second place was USA, after a strong last lap, with Europe in third place.

The overall team title went to the Europeans, due to strong and consistent performance across the individual races. Europe finished with 55 points, Great Britain with 84 points and the USA with 90 points.

Earlier in the day, the Scottish Inter District Championships saw some cracking cross country running with athletes from far and wide representing their districts.

The men’s senior race was won by Shettleston Harrier Lachlan Oates (25:16), representing West Scotland, ahead of Linton Taylor (25:23) for the North of England and Alastair Hay (25:25) for East Scotland. Preston AC’s Nathan Dunn was first U20 in 25:43 and eighth place overall.

The women’s senior race saw a win for Scottish Students and Mhairi MacLennan (20:40) ahead of North of England’s Lucy Crookes (20:55) with third place going to Morag Miller of Scotland East in 21:08. Eloise Walker of Edinburgh AC was the first U20 in 21:47 for fifth overall.