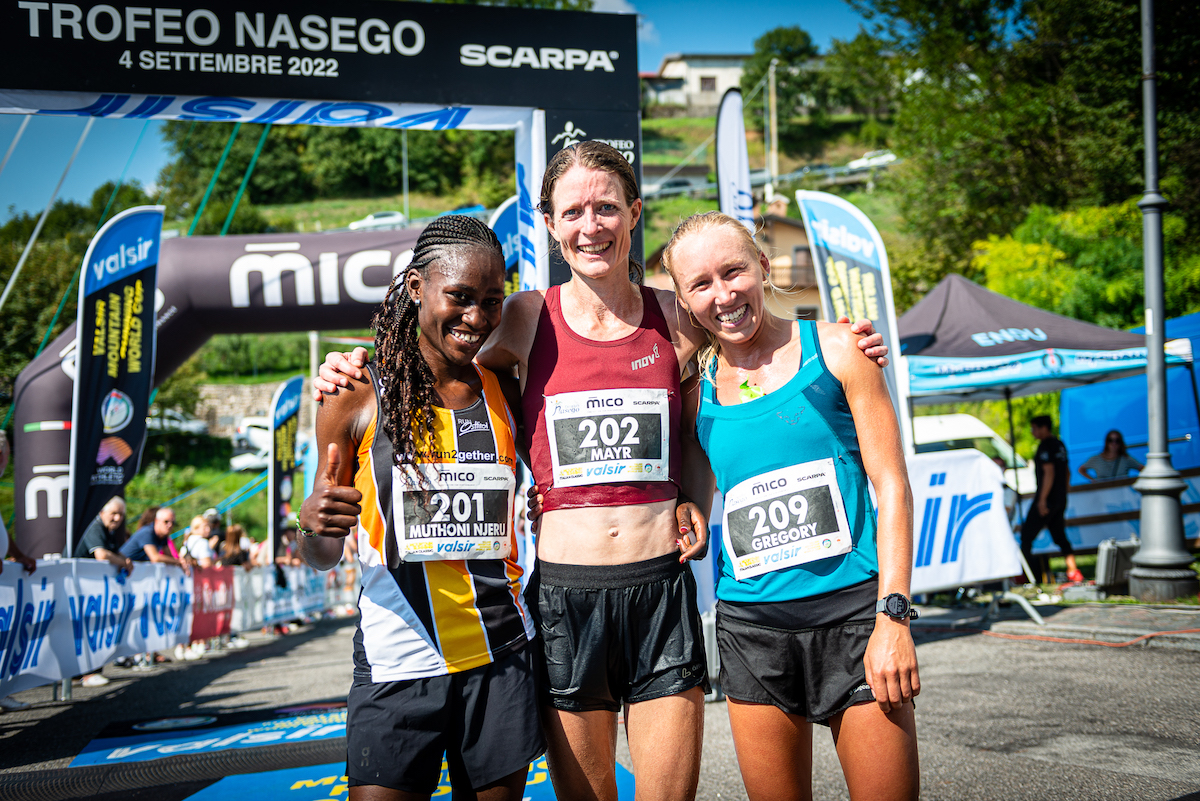 Kipngeno and Mayr finish 1st, whilst Zak Hanna shines on the uphill the day before. Written by María Ávila for WMRA.

On a breathtaking day of racing in the northern region of Italy it was Andrea Mayr and Patrick Kipngeno, both champions on the previous day at the Nasego Vertical, who claimed the double victory at the races of the Valsir Mountain Running World Cup.

Both races saw an intense battle on the testing course.  The lead changed constantly in both categories throughout the race. The 21,5 kilometer distance held on Italian soil didn’t stop international athletes taking the title with 10 nationalities in the top 10.

During the 21st edition of Trofeo Nasego, the Austrian runner Andrea Mayr and Patrick Kipnego wrote their names for the first time in this race alongside champions of the status of Isaac Kriprop and Grayson Murphy from the previous year.

Second places for men and women went to Philemon Kiriago, who was always close to the winner throughout the race, and Joyce Muthoni Njeru having an unusual weekend breaking her winning streak. Petro Mamu and Lauren Gregory took the third positions.

The day started with some of the top leading runners divided into two groups. On the first section Lucy Wambui ran closely to her compatriot Joyce Muthoni Njeru and Monica Madalina Florea followed by a group including the days winner Andrea Mayr, Camilla Magliano and Lauren Gregory. On the fourth kilometer, the Romanian Florea was ahead while Njeru was already in second place.

The lead changed with the arrival of kilometer 14 where Andrea Mayr had taken the lead despite stumbling on a rock. Njeru arrived to this same point more than one minute after the Austrian and Madalina was close behind her still fighting for a place on the podium.

At the high point the result seemed confirmed; however there was a new surprise by the time runners crossed the finish line, Madalina Florea had dropped back while in her place Lauren Gregory from United States claimed the third position.

The final result, Andrea Mayr ultimately confirmed her superiority as the queen of Nasego 2022 with a time of 1h47’32”, following her was Joyce Njeru with the second place obtained by her consistent running. After them, Lauren Gregory, Monica Madalina Florea and then Lucy Wambui who wasn’t able to retain her title on Nasego from 2019.

It has been a great weekend for Andrea Mayr achieving two victories during this double Gold Label race weekend in the Italian mountains.  She finally got the first place at the longer Trofeo race on Sunday after finishing second at last years edition.

On the other hand, Njeru was not able to extend her impeccable run of victories; this is one of the last races for Joyce this season, which could threaten her lead on the table of results at the Valsir World Cup for this year. In the Men´s race the Trofeo Nasego was certainly a race of steeply rising and falling emotions on this uphill downhill course. At the start of the race Andreu Blanes, from Spain, put his foot on the gas pedal from the start breaking away with leaving the entire field in his dust.

Later, he was caught by the Kenyan duo of Patrick Kipnego and Philemon Kiriago who challenged Blanes to a “foot-to-foot” duel. At the end the Spaniard could not keep up his strong pace and so had to leave the podium behind.

At the middle point of the track, the Africans already dominated with the two Kenyan´s along with Eritrean Petro Mamu.

The results seemed clearer at the highest point of the race where the Run2gether pair were leading with a gap of at least one minute over Mamu.

Further on, during the last downhill section the result was confirmed where once again, Patrick Kipnego descended strongly and arrived in first place along with another record time of 1h30’46” following up from his record the day before. Only 54 seconds after him, Kiriago was the second runner over the finish line while until the next to arrive was Petro Shaku Mamu.

Despite this strong performance, Petro Mamu couldn’t defend his title from last year while in contrast it has been a great weekend and also an amazing season for the Kenyan runners that have dominated many European races this year.

Kipnego holds the first place at the Valsir World Cup with a good lead but there is still room for others to challenge at the remaining races.  He also has left his name in the history books of Nasego with two new race records broken in one weekend.