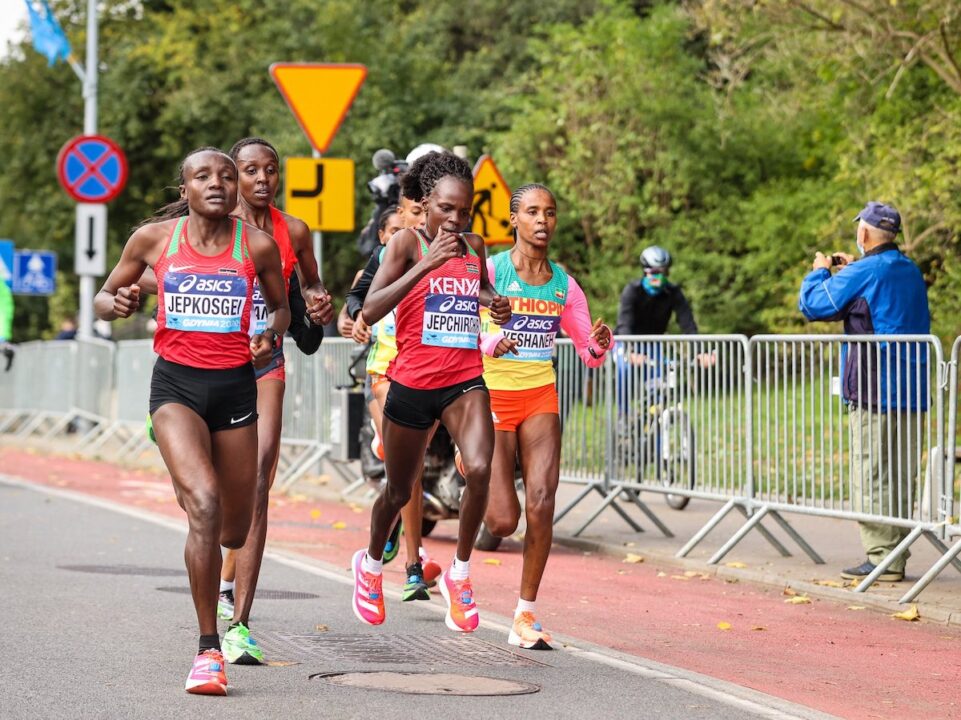 A lot of the pace making was done by Jepchirchir and Jepkosgei. Photo: World Athletics

19 year old Jacob Kiplimo sizzled to a new Championship record with 58:49 as Peres Jepchirchir regains her crown from 2016. Jake Smith also flies to a new U23 British Record.

The 24th edition of the World Athletics Half Marathon Championships took place on the re-arranged date in Gdynia, Northern Poland on Saturday. Races used a 5.5km loop starting in the City Centre with the finish area utilising a purpose built surface on the City’s Beach on Gdansk Bay on the Southern Coast of the Baltic Sea.

First up was the women’s race, with cool temperatures of around 8oc when the 105 starters hit the roads, perfect for the blistering starting pace.

Ethiopia’s Ababel Yeshaneh was among the favourites for the title following her 64:31 world record at Ras Al Kaimah in February.

Other favourites included previous World Champions Peres Jepchirchir (2016), defending Champion Netsanet Gudetta, former world record holder Joyceline Jepkosgei and the hugely talented Rosemary Wanjiru who is the fastest debutant in history with 65:34 but is yet to claim a global title.

Championships are often known for their cagey racing but with so many of the world’s best in the field, fast times were expected with former World Record Holder Jepchirchir hinting in the pre-race press conference that world records could be possible.

A group of 12 athletes passed the 5km mark in 15:20 with 2016 Champion Jepchirchir and former world record holder Jepkosgei at the very front. The 10km mark was passed in 30:47 with seven athletes remaining in the leading group.

With around half a lap left to run, Yeshanah and Jepkosgei fell forcing a decisive move from 2016 Champion Jepchirchir, Ethiopia’s Yalemzerf Yehualaw and Germany’s Melat Kejeta.

With a well timed sprint to the finish, it was a victory for Peres Jepchirchir in 65:16 to regain her title from Cardiff in 2016. After being on the front for most of the pack running, it was great to see the hard work put in by the Kenyan athlete throughout the race pay off in the final stages.

Kejeta claimed a Silver medal in 65:18 for with a European record for the German and with Ethiopian Yehualaw claiming Bronze in 65:19. All three podium finishers went under Jepchirchir’s women’s only World Record set in Prague in September.

Samantha Harrison was the leading Briton from start to finish, with the Charnwood AC athlete finishing in a time of 71:53 and in 47th place.

‘’I was really happy with that’’ said Harrison. ‘’The course was much tougher than I anticipated it being and it really took it out of your legs. I started off well but as the race wore on it all just started to take its toll’’.

‘’I’m happy with it for my senior debut, I gave it all that I could and I’m happy to be inside the top 50 on my first appearance in a British vest’’.

Becky Briggs was the second British finisher in 73:08 on her senior debut for Great Britain and Northern Ireland and as the youngest athlete in the race. ‘’I’m only 20 but what an amazing experience to be in the same race as some of these girls, especially when they’re breaking the world record like they have done today’’.

Clara Evans finished just behind in 65th place with 73:11. Upset in the men’s event

Debutant Joshua Cheptegei began as the overwhelming favourite in the men’s race after setting World records on his last three outings with 26:11.00 for 10,000m in Valencia, 12:35.36 for 5,000m at the Meeting Hercules and 12:51 for 5km in Monaco back in February.

In the absence of defending Champion Geoffrey Kamworor who is recovering from being hit by a motorcyclist whilst training in Kenya, 19 year old Jacob Kiplimo was thought to be among the main challengers.

Kenya’s Kibiwott Kandie (P.B. 58:38) and Ethiopia’s Guye Idemo Adola (59:06) were amongst the other main protagonists.

It became apparent early on that chasing world records wasn’t a priority for the leading African athletes which included Ugandan Cheptegei in his longest race to date.

Early warm up for some of the leaders

European Record Holder Julien Wanders (59:13) of Switzerland took out the early frontrunning with Briton Jake Smith also right at the front of the field in the early kilometres.

5km was passed in 14:19 with much of the field still intact. That group thinned to around 20 athletes just under the 20 minute mark and still featuring leading Briton Smith. 10km then came in 28:23 with Smith still in attendance.

It was indeed Kiplimo that made a decisive move at just under the 50 minute mark to surge clear of second placed Kandie with further daylight back to Ethiopia’s Amedework Walelegn and Cheptegei.

Kiplimo relied on his track pace, proved with a 12:48 clocking over 5,000m this summer to pull away from Kandie and to stun the world with a first senior global title in a world u20 best of 58:49. This was also a Championships best and a Ugandan national record by over a minute.

Kibiwott Kandie was next to finish in 58:54 with Walelegn claiming the Bronze medal in 59:08. Despite the upset, it was still a great debut for Cheptegei who was fourth in 59:21.

Kenya regained the team title from Cardiff, overcoming defending Champions Ethiopia and with Uganda claiming their first team medals at the Championships since 2004 with Bronze. Jake Smith came home as the second European athlete in 18th place with an eye watering 60:31 setting a new national record for Wales, re-moulding Steve Jones’ record of 61:14. His time also sends Smith to third on the UK all the lists behind Mo Farah and Callum Hawkins.

Smith commented saying; ‘’When I came down that final straight and saw what I was at the 20km mark, I couldn’t believe it. I got a 10km PB along the way and I was with the main group when I did that and it was so good. In that last lap, I caught one of the Turkish guys and just worked with him and I knew once we were at the top of the hill, it was downhill all the way’’.

‘’I put everything into the downhill and tried to hang on as much as I could. I started crying happy tears on the home straight because I just couldn’t believe it’’.

Mohamud Aadan was the second British man in 50th with 62:41 just 10 seconds of his P.B. from the Commonwealth Half Marathon Championships in 2018.