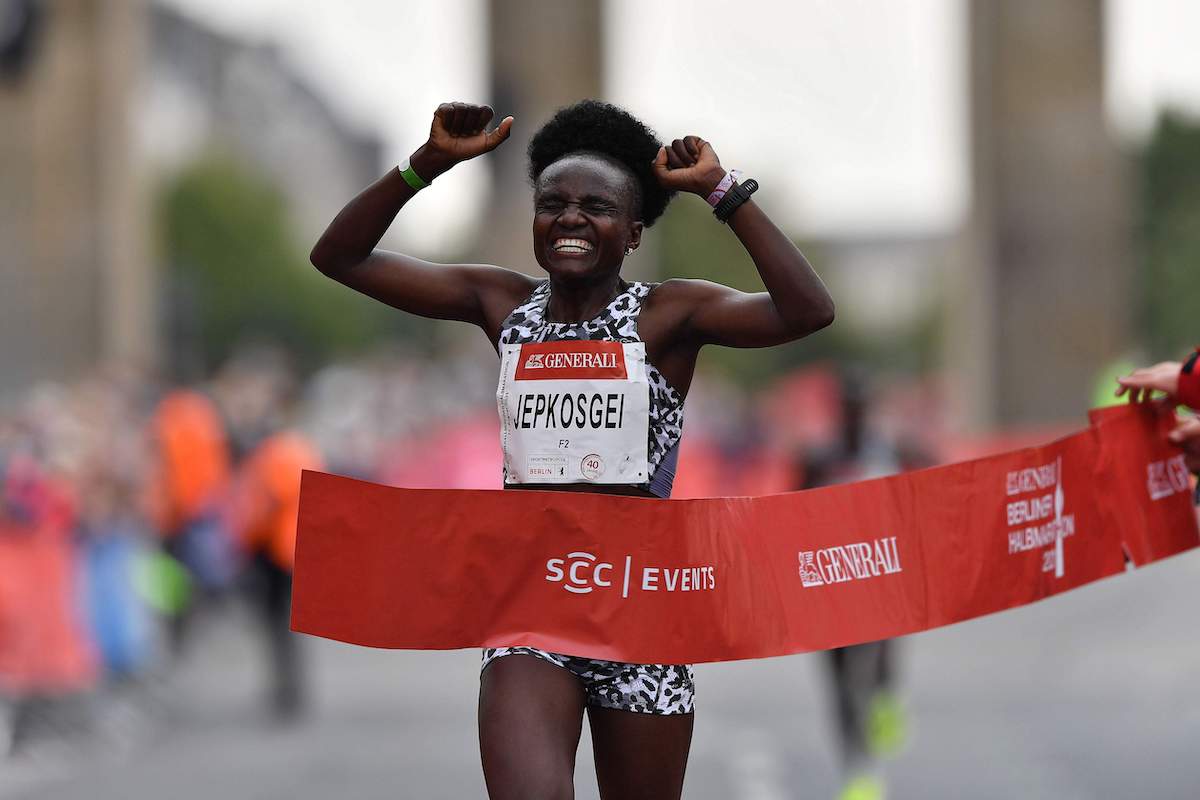 Joyciline Jepkosgei took the GENERALI BERLIN HALF MARATHON with a spectacular course record of 65:16.

The 27 year-old Kenyan smashed the mark of Dutch double Olympic Champion Sifan Hassan, who had won the race with 65:45 in 2019. Second-placed Kenyan Nancy Meto was just five seconds behind, improving her PB by more than three minutes. With 65:21 she was also inside the former course record. Valary Aiyabei completed the Kenyan podium with 67:32 for third place.

Kenya’s Felix Kipkoech clocked a world leading time of 58:57 in partly windy but otherwise good conditions. The 23 year-old improved his own world lead by 38 seconds. Fellow Kenyans Josphat Tanui and Philemon Kiplimo followed in second and third with 59:40 and 59:54 respectively.

A total of 15,096 athletes from 130 countries started at the 40th edition of the GENERALI BERLIN HALF MARATHON. 14,508 of them were half marathon runners, making this the biggest race in the world so far this year. The race took place with strict hygiene rules in place.

Due to a tail wind during the first couple of kilometres some very fast split times were recorded. Kenyans Joyciline Jepkosgei, Nancy Meto and Valary Aiyabei stormed through the 5 k mark in 15:02. This was well under world record pace.

However the global mark of 64:02 then slipped out of reach when the wind hit the runners from the front for a longer section. Nonetheless the pace was still extraordinary fast.

The Kenyan trio passed the 10 k mark in 30:29. On the way to 15 k (46:02) Valary Aiyabei lost contact. In contrast Nancy Meto managed to hold on to the former world half marathon record holder Joyciline Jepkosgei (64:51) until the final two kilometers. She was rewarded by her fine race with second place and an improvement by more than three minutes to 65:21.

“I am really happy that we are able to run big major races again.”

While there were six runners achieving times of sub 70 minutes Berlin’s Rabea Schöneborn was the fastest German. She finished eighth with a personal best of 70:35. With the wind coming from behind during the first section the men set off very fast as well. They passed 5 k in 13:42 before a group of seven reached the 10 k mark in 27:45. They were still on course for the course record of Eric Kiptanui, which in contrast to the women was the official pre-race target. The Kenyan had won the Berlin race with 58:42 in 2018.

However during the second half the leaders lost a couple of seconds, when they battled the wind and pacemakers were dropping out.

After 15 k (41:57) Felix Kipkoech, Josphat Tanui and Philemon Kiplimo were in the lead. This was no surprise as they were the trio on the start list with personal bests of sub 60 minutes. Kiplimo was then dropping back at 16 k and Tanui could not hold on much longer as well.

A winning surge over three kilometres

“I am really happy, this is the biggest win in my career,“ said the Kenyan who is still a newcomer. The 23 year-old only ran his first international races in 2019. This spring he won the Siena half marathon with a world lead of 59:35. Clocking 58:57 in Berlin he now improved his own mark by 38 seconds.

Germany’s Philipp Pflieger was the fastest national runner with a time of 63:03. He missed his PB by just 13 seconds and finished ninth.

Up to the Eagle’s Nest
Welsh 5km record for Arter