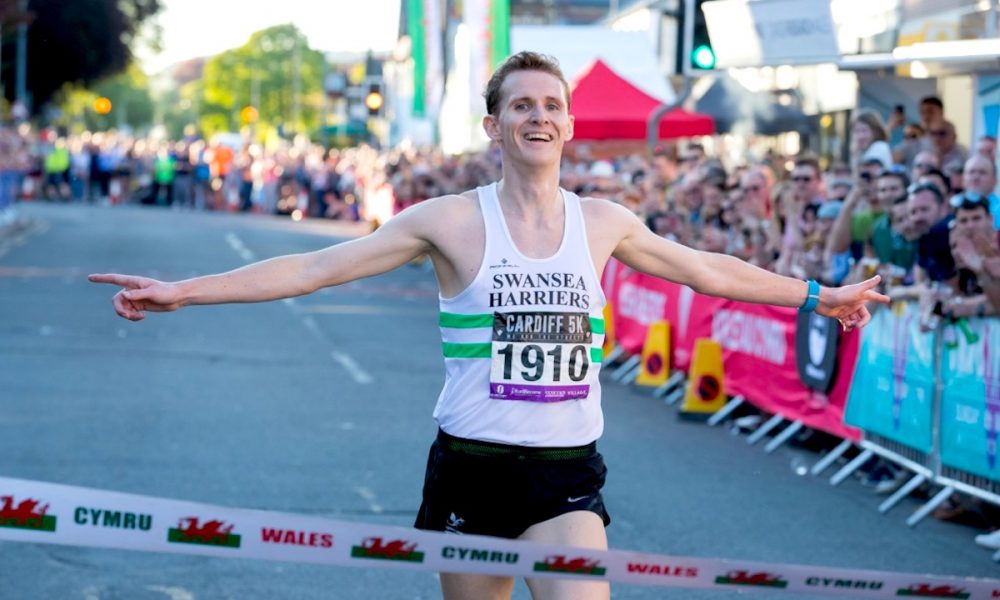 The Cardiff 5k hosted the championships at their popular and well-supported road race that starts and finishes in Whitchurch, taking runners around a loop of the leafy suburb in the North of Cardiff.

The event is famed for the great atmosphere and festival like feel created by the live music, street entertainment, a supercar parade and a flat and fast race with a stellar field.

At the pre-race press conference, the race’s three lead men that represented Wales at the Commonwealth Games on the Gold Coast had pondered on who was likely to emerge as the 2018 champion.

Tom Marshall of Cardiff AAC was defending the title but was aware that he would need to stick with club mate Ieuan Thomas and Swansea Harrier Jonathan Hopkins if the sub four-minute miler was to take advantage of his track speed.

Thomas remained quietly confident as did Hopkins who finished just ahead of him in seventh place at the 3000m steeplechase race at the Commonwealth Games.

When the action started to unfold, it was the three men that got away from the chasing field that included another Team Wales man, Iestyn Harrett who had competed in the triathlon mixed relay.

With around 800m left to run, it was Swansea Harrier Hopkins who had stamped his authority on the race, having around a 40m lead over last year’s champion Marshall and Thomas who ran together. He stopped the clock in 14:18 just seven seconds outside of Kristian Jones’ all-comers record.

Thomas finished a clear second in 14:37 with Abed Teweldebrhan claiming third for his Newport Harriers club, a week on from taking the third spot at the ABP Newport Wales 10k behind race winner Ieuan Thomas.

Marshall was next home in fourth, with the 2018 Welsh Cross Country Champion James Hunt completing the top five in the championship but with Harrett splitting the pair in the open race.

“I felt like it would be a tough race but I broke the guys a little bit earlier than I expected,” said Hopkins following the race. “After looking at the course I wanted to make my move at 3k on the hill and it just fell into place. The final kilometre was tough but the crowd really brought me home.”

When Charlotte Arter appeared on the finish straight, the crowds roared her on to the all-comers record which shaved 20 seconds of the previous mark that she had posted at the Nos Galan Road Races last December. She also came agonisingly close to the Welsh record of 15:39 set by Stevie Stockton at the Mid Cheshire 5k last weekend.

“I’m delighted to win gold at my first Welsh champs,” said Arter. “It was a great event and I’m really pleased to run a Welsh all-comers record and PB, always love to race on the streets of Cardiff! A good test of the legs & lungs ahead of Highgate in two weeks.”

ABP Newport Wales 10k champion Rachel Felton claimed second place and commented on the race saying: “that was amazing. I don’t know another race like it.”

This was just one of the top road races taking place across the UK this weekend and you read all about the action elsewhere here.