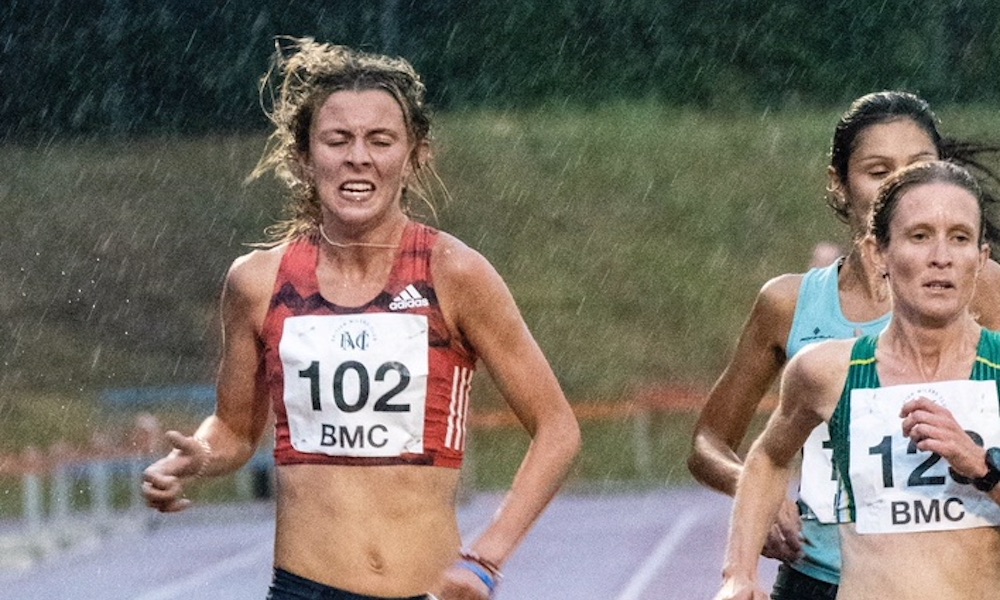 The MK5000m PB Special saw PBs for many taking on the BMC Gold races while Graham Rush impressed taking two podium positions in a matter of hours.

Organisers of the MK5000m/BMC meet at Milton Keynes had worked hard for months leading up to this event to attract some of the best British athletes to contest potentially fast and furious gold standard races at the end of a whole evening of top class athletics.

They were rewarded with some scintillating performances from the likes of Jess Judd and Jack Crabtree, who took victory in their respective A races, along with a welcome return to competition for Emelia Gorecka, who toed the racing line for the first time since the Highgate Harriers Night of the 10,000m PBs.

Shaftesbury Barnet’s Crabtree defied the wet and windy conditions to take the men’s race in a 14:07.74 PB, holding off Wells City’s Oliver Fox by four seconds for the win. Fox’s 14:11.20 was also a PB, while Cheltenham’s V35 Graham Rush impressed once again in third with a 14:13.85 result. Rush was set to race again the next morning at the Darlington 10k, read on to see how he got on..!

Judd was rewarded for her characteristically gutsy racing style with a win in 15:37.23, less than three seconds shy of her best from 2017. The Blackburn star won easily from her two Aldershot Farnham & District rivals, Emily Hosker Thornhill and Gorecka, who clocked 15:58.31 and 16:06.30 respectively.

The gold races were the pinnacle of a successful night of graded 5000m competition, with athletes and supporters alike enjoying live music, beer and food stalls throughout the evening.

Although the overall victory deservedly went to New Marske Harriers’ Dominic Shaw, who ran a superb 30:17 to win in style in a near-PB, extra kudos must go to prolific racer Graham Rush, who ran a fantastic 31:22 for second, just hours after  taking third at the MK5000m BMC meet in 14:13.85. The Cheltenham veteran travelled 200 miles from Milton Keynes late at night to make the start line of the Darlington 10k, a feat not many runners can claim to have done as successfully as Rush did!

Rush did well to hold off the challenge from Leeds City’s Wondiye Indelbu, who was just 7 seconds behind by the time he crossed the line.

Tracy Millmore took victory for Birtley AC in the women’s race in a strong 36:37, a time she has consistently run within 20 seconds of on numerous occasions over the last 12 months.

Harrogate Harriers’ Sharon Barlow was a minute back in second with a 37:35 result, but well clear of third placed Louise Talman from the host club, who still ran a hard earned 39:23.

Former top steeplechase specialist turned road and cross country runner, Polly Keen of Nuneaton and Cambridge Uni, took victory in 38:09 to finish 14th overall at this Staffordshire event. Peel’s Emma Pick earned herself a PB with a 40:16 clocking in second, while fellow U23 Ellie- May Evans took third place for South Derbyshire in 42:03.

Lichfield’s Matthew Orford won the men’s race in a lifetime best of 35:00, while a mysteriously abbreviated R O’Sullivan was second for Lichfield in 35:41. A closer look at the champion Essex-based snooker star Ronnie O’Sullivan’s Power of 10 and social media profiles confirmed the renowned club runner is still a member of Woodford Green with Essex Ladies! Richard O’Sullivan was in fact the second man at Burton, just ahead of Tamworth’s Ben Evans, who ran 35:48 for third.

Shelton’s Julie Warner was the stand out performance from this popular Nottinghamshire event, with the V50 impressing with victory in 84:14, a time she has run within 10 seconds of on three separate occasions. Julie Warner breaking the tape at the Newark Half

Nene Valley Harriers’ fast improving endurance specialist, Jordan Foster, took the second lady position in 86:31, just three seconds off her PB from the Big Half earlier this year, and Holme Pierrepont’s Natalie Hoffman was third in 1:31:38.

Valley Striders’ V40 John Hobbs was the first across in line in 73:14, ahead of Cambridge & Coleridge’s Duncan Coombs and City of Stoke’s Chris Gidlow, who ran 74:09 and 74:13 to take the second and third prizes. Run For All Nottingham 10k

Hallamshire Harriers’ Andrew Challenger won this popular event by more than a minute in 32:36 from Serpentine’s Sam Barnes, who was himself well clear of third in 33:40. Basildon’s Steven Strange completed the podium positions in 34:21. Fast Running’s writing team were also in racing action this weekend, with Robbie Britton travelling to Poland to take on the Gorce Ultra 102k mountain race and Ruth Jones traveling not quite as far to Dorset but ‘enjoying’ similar torrential rain and storm conditions for the Bridport Jurassic Coast fell half marathon.

Robbie won his ultra in 10:24 – breaking the old course record by more than 90 minutes – on trails that took competitors on a challenging journey up and down 4300m of ascent and descent in the Polish mountains in heavy rain. Not bad for a Kentish lad! Ruth was second lady at the brutal Dorset fell race on the never-ending cliffs and coast paths in 1:56:03, which took in more than 2000ft of elevation on the 13.1m route. Ruth Jones was second at the Bridport half marathon fell race

The conditions were atrocious, with fog and wind so thick and strong it was often nigh on impossible to both see or move. The race was won overall by Avon Valley’s hugely impressive Ruth Barnes for the second year in a row in an astonishing 1:39:05, a time that put her more than two minutes ahead of the first man.

Ultra runner and marathon GB sensation Robbie Simpson finished a superb second at one of the most competitive trail races in the world at the Sierre Zinal for the third year in a row.

Packing 2200m of climbing into the 31km route around the Swiss Alps, the race is the fastest and most competitive of the renowned international Golden Trail Series.

The Scottish star excelled to make the podium for the third time, while fellow Scotts Andrew Douglas and Jacob Adkin also impressed to make the top ten.