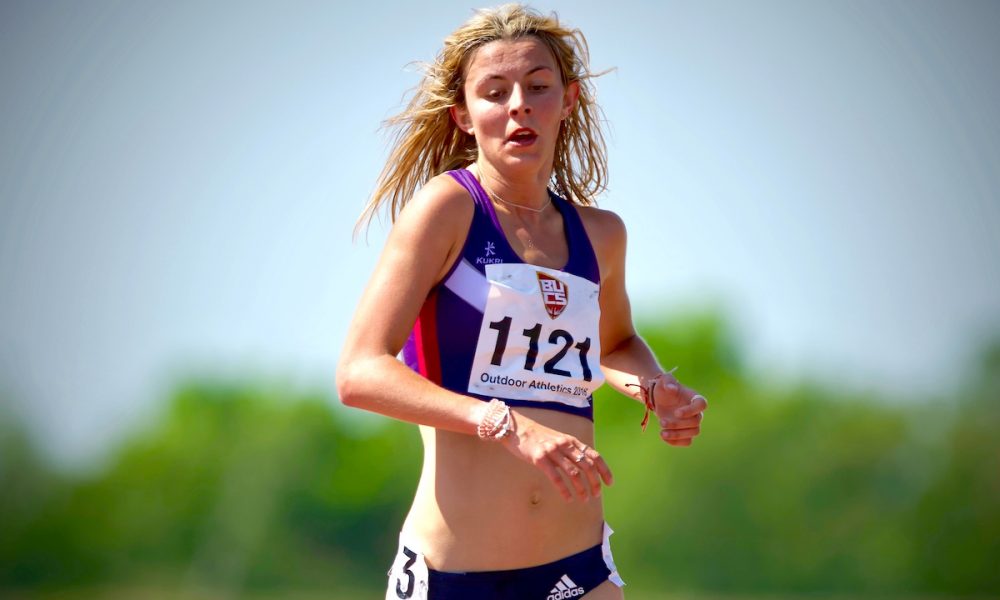 Student athletes excel in Bedford on the hottest May Day Bank Holiday on record.

Jess Judd and Jamie Webb were among the winners as the eight distance finals took place on the third day (May 7) of the British Universities and Colleges Sport Outdoor Athletics Championships.

Unfortunately for the athletes, Monday saw the hottest weather of the weekend in Bedford, but Judd made light work of the conditions as she took her fourth BUCS outdoor title in a row, winning the 5000m in 16:10.81.

The Loughborough University student, who reached the final of the Commonwealth Games 1500m last month, moved away with four and a half laps to go, clocking 3:08 for the final kilometre.

Having won two titles at 800m and one at 1500m at the BUCS outdoors, Judd says she is keeping her options open for this season, although she is leaning towards the metric mile.

“I’m happy to be here and be in one piece,” said the versatile 22-year-old, who has won silver medals at both 800m and cross country in the World Juniors and European Cross junior race.

“Australia was disappointing for me to come last, but I couldn’t have run any quicker at that time of year.” Webb, who is aiming to contest the Europeans this summer over 800m as he did in 2016, said: “I knew it was a tall order to beat Dan Rowden in the 800m not on fresh legs. Today was a bit of an unknown as I’ve never doubled before. It’s nice to finish on a win.

“I think I’d have backed myself if I was doing one or the other… I just wanted to give myself a challenge and enjoy my last BUCS.” Davies led at the bell after a group of nine were still in contention at 4km, but Cairess came past on the final straight to clock 14:00.30.

After a final kilometre under 2:34, the St Mary’s University athlete said: “He went away and he’s the class of the field. I just thought I’d go as hard as I can and see what I get from it. It was a big surprise.”

Steeplechaser Daniel Jarvis of St Mary’s was another to step up from bronze last year as he took his race in 8:54.39.

Birmingham University’s Mari Smith prevailed in an exciting finish to the women’s 800m, coming past Mhairi Hendry, who led most of the way, to clock a PB 2:03.71.

Smith said: “I’m really pleased, with the PB as well. It’s Mhairi Hendry, so I was expecting her to take it out and I thought she was going to be too strong for me in the last 100m, but I just found something, I don’t know where.” Rowden said: “I’m very pleased. My winter’s been a bit different compared to years before so I wasn’t really sure coming in. This competition compared to years previously was absolutely stacked with 800m talent so it was going to be a lot tougher than I anticipated when I said I’d run at BUCS.

“I was just outside the European senior qualifying time last year so I want to try and get that and go the British champs and try and mix it with the big boys.”

In the women’s 1500m, Cari Hughes stretched it out over the final 200m to clock 4:23.79. That was more than a second off the PB of the Loughborough athlete, who competed for Britain in the relay at the European Cross in December.

Meanwhile, Emily Moyes defended her 2000m steeplechase title, the European Junior Championships representative coming away from her two close challengers with a lap to go to clock 6:42.20 – seven seconds outside her own championship best.