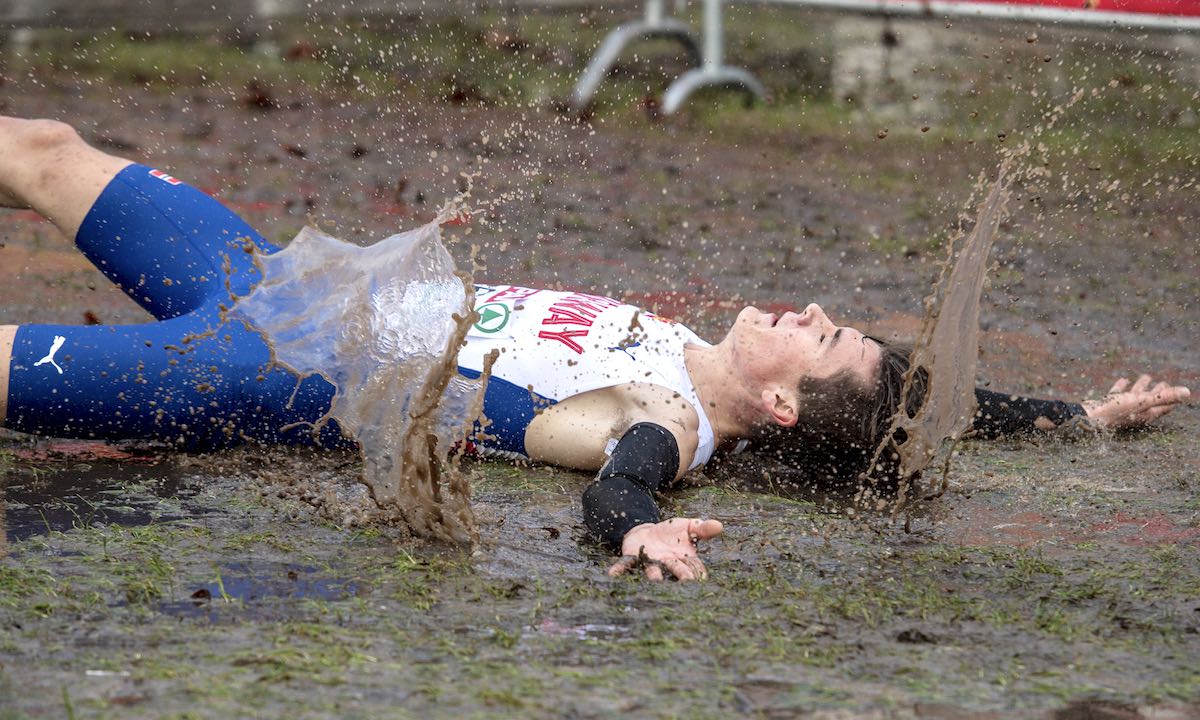 Great Britain got off to a solid start at the European Cross Country Championships in Tilburg on Sunday (December 9) with four team medals in the four age-group races.

The British under-20 women showed the way in the first race by defending their team gold from 12 months ago on an energy-sapping muddy course, becoming increasingly torn up in the rainy conditions.

Amelia Quirk led Britain to a defence of their team title as Italy’s Nadia Battocletti took the individual win.

Battocletti stepped up from fifth last year as she sprinted away from her close challengers in the last 400m to win by a second. Delia Sclabas gained silver for Switzerland, while Turkey’s Inci Kalkan was third.

Quirk recovered well from a fall at around halfway to regain contact with the lead group of six, but she was dropped with around a kilometre to go.

The 18-year-old, who helped Britain to gold two years ago, came home fifth, 11 seconds adrift of the winner. With Khahisa Mhlanga seventh and Grace Brock 11th, GB took team gold in this category for the 13th time in 14 years on 23 points – five points ahead of Netherlands.

Behind the scoring team, trials winner Cari Hughes was 13th, Anna MacFadyen was 20th and Tiffany Penfold was 36th. “It went off quite fast but I was feeling quite comfortable,” said Quirk afterwards. “The Irish girl went down right in front of me and I fell on top of her and then someone fell on top of me. I gave it my best shot and it was okay.

“I fell in Liverpool [British trials] but nearer the start, but I know the quicker I get up the less places I am going to lose. The race was moving so quickly at that point, so I knew it was probably changing as I had fallen and when I got back up there were different people around me. It was a shame because I felt if I hadn’t have fallen I could have got a medal, but team gold is amazing.”

Norwegian superstar Jakob Ingebrigtsen was the expected overall winner, leading his country to a narrow victory over Britain in the team stakes.

The European senior 1500m and 5000m champion bided his time as Spaniard Ouassim Oumaiz took much of the limelight, trying to stretch out the field on occasions and instigating a high-five with the favourite mid-race.

After it came down to three with a mile to go of the 6.3km race, Ingebrigtsen, who probably could have challenged for the senior title, eased clear to a nine-second win. Serbia’s Elzan Bibic took bronze, another two seconds behind. Britain’s Jake Heyward, the European junior 1500m champion, had been expected to challenge for a medal after struggling with illness in last year’s race but failed to stay with the pace and crossed the line fourth.

Norway, with Simen Halle fifth and Hakon Stavik 22nd, did just enough to take team gold on 28 points. GB were just two points behind as Isaac Akers was 12th and Matt Willis 14th.

The British sextet were completed by Jack Meijer in 28th, Tom Mortimer in 32nd and Rory Leonard in 71st, who was hindered by shoe problems after someone stood on his spike.

England-based Dane Anna-Emilie Moller lived up to her reputation as pre-race favourite by coming past Germany’s Anna Gehring right at the end as defending champion Britain had to settle for team bronze.

Moller, the European under-23 steeplechase champion, built up to this event by winning at the Cardiff Cross Challenge, just along the motorway from her St Mary’s base.

After seventh last year, she came into the event on form and it was no surprise when she refused to let Gehring get too far away when she made her move on the last lap of 6.3km race, going away for a two-second win. Poland’s Weronika Pyzik was third, another 10 seconds behind.

Amy Griffiths, the first under-23 at the trial race in Liverpool, was seventh as she led home the British team. With Poppy Tank ninth and Abbie Donnelly 17th, they amassed 33 points for team bronze, with Germany claiming gold on 22 ahead of Spain’s 25. Jimmy Gressier was a decisive winner as he inspired France to team gold over Britain, becoming the first man to defend the European under-23 title.

The former footballer stretched out a lead from early on and had plenty of time to grab two French flags as he came into the finish. Despite literally falling across the line after a stumble, he was four seconds in front of Germany’s runner-up Samuel Fitwi. France had another medal as Hugo Hay took bronze ahead of Ireland’s Ryan Forsyth.

With French flags in both hands Jimmy Gressier attempts to slide but trips to winning the U23 men's gold.

Although Britain had two in the top 10, France were comfortable winners on 11 points as Fabien Palcau was their final scorer in seventh.
GB’s Patrick Dever improved from 16th last year by placing fifth, three places ahead of team-mate Emile Cairess.

Competing in these championships for the fourth successive occasion, Mahamed Mahamed was next in for Britain in 17th, a couple of positions up on Oliver Fox. Paulos Surafel was 27th, immediately followed John Millar.