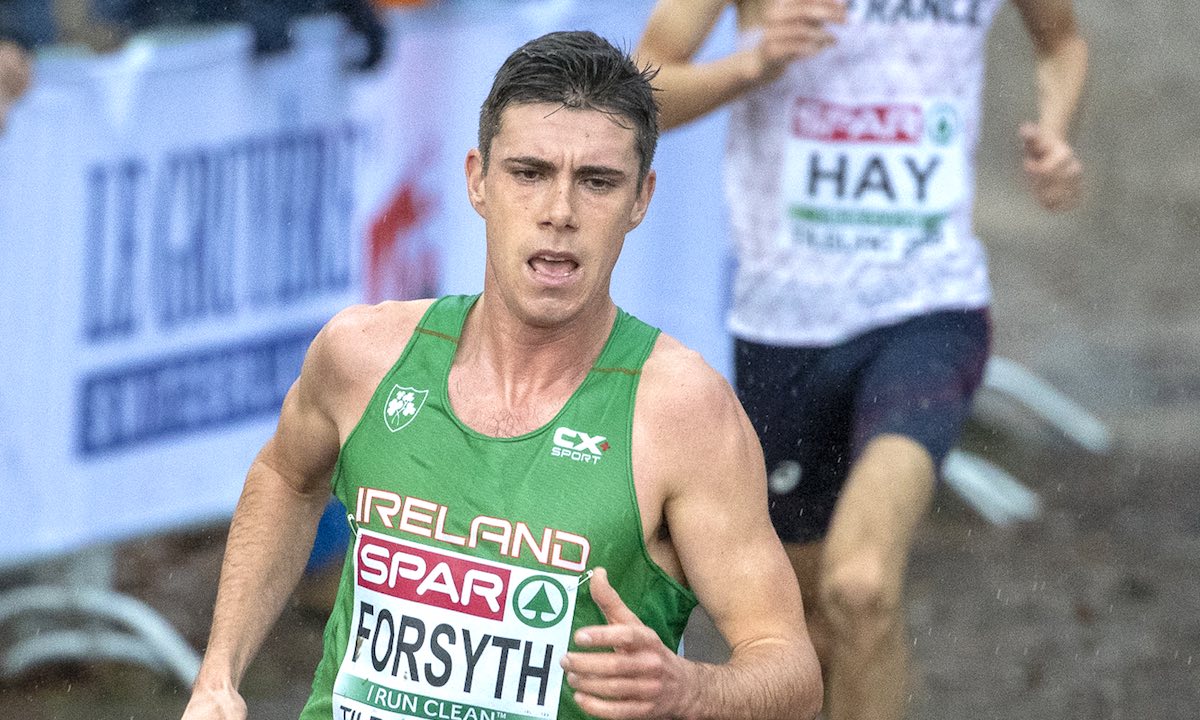 The Irish debutant impresses in Tilburg as Emma O’Brien and Sarah Healy claim top 10 places in the under-20 women’s race.

Finishing a strong fourth in the under-23 men’s race, Ryan Forsyth was the top performing Irish athlete in the morning racing at the European Cross Country Championships in Tilburg on Sunday (December 9).

The Newcastle AC athlete, who grew up in America with his mother from Northern Ireland, took the race out from the gun and led the mass start before finding himself in a battle for the final medal position.

In the end, France’s Hugo Hay won the contest for bronze with Irish debutant Forsyth finishing just one second off.

Defending champion Jimmy Gressier successfully retained his title ahead of Germany’s Samual Fitwi and led France to team gold ahead of Great Britain and Spain.

Gressier did have an awkward finish though as he attempted to slide across the finish line with two French flags in hands.

How not to finish a cross country race. 🙈#Tilburg2018 pic.twitter.com/2kJ3I6WOFb

“I like to race aggressively,” said Forsyth, who finished 11th last month at the NCAA Championships. “I believe I should be up there and so should the team. It’s an honour to wear the vest.”

The under-20 women’s race was the first event of the day over the testing Tilburg course, with Ireland’s Emma O’Brien and Sarah Healy claiming top 10 places, while the team finished sixth overall. Healy, the European U18 1500m and 3000m champion, had been pipped as the favourite by many, but a fall at the halfway point severely hampered any medal hopes for the youngster.

The Blackrock athlete will surely learn from the experience ahead of another two years at this level.

Bad news for one of the favourites.

O’Brien finished eighth ahead of Healy in ninth, while Stephanie Cotter was the next counting athlete in 25th. Completing the team was Jodie McCann in 35th, Sophie O’Sullivan in 59th and Laura Nicholson in 60th.

Ireland’s under-20 men finished a strong fifth with Darragh McElhinney first across the finish line in 16th place.

Sean O’Leary was 18th ahead of Jamie Battle in 21st, Michael Power in 60th, Fintan Stewart in 75th and Daire Finn completed the team in 86th.

Roisin Flanagan was next in 41st ahead of Fian Sweeney in 43rd, while Siobhra O’Flaherty finished 54th and Sorcha McAllister was 66th.

In the senior races, Sean Tobin finished a strong 10th in the men’s event, while Sara Treacy was the first Irish woman in 26th place. A full report from the senior races can be found here.

European Cross Country Championships: Who, what and when?
Jakob Ingebrigtsen wins U20 men’s crown as GB claim U20 women’s team gold