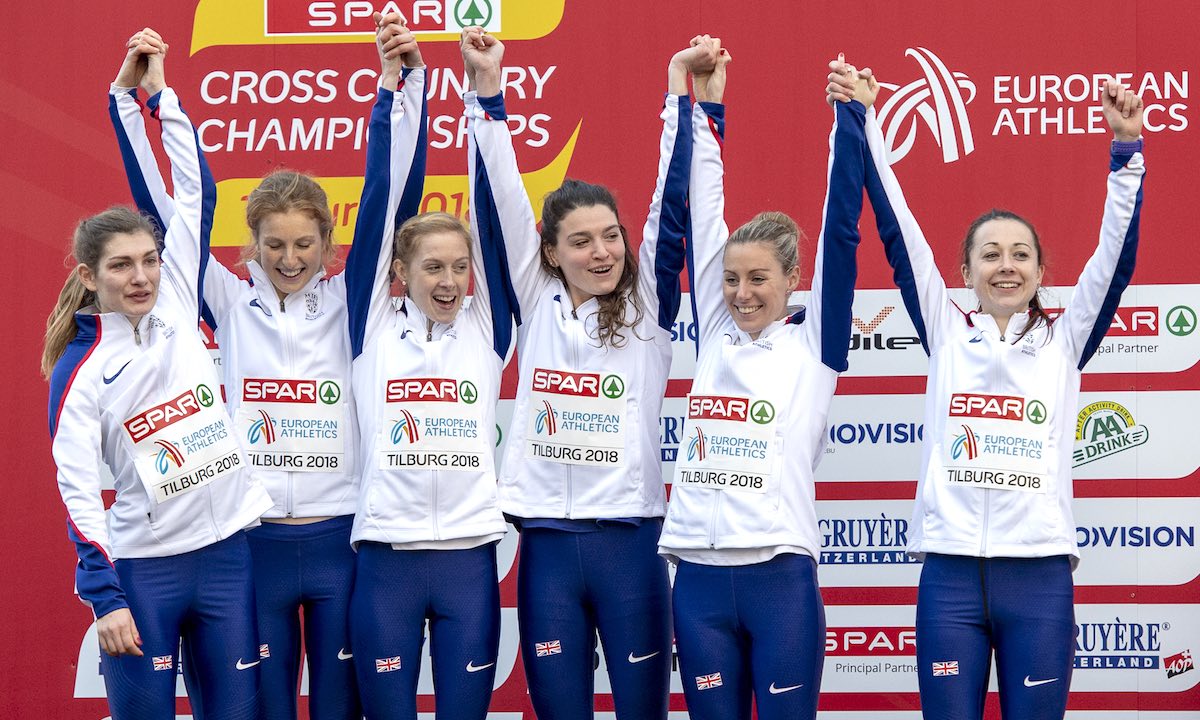 Great Britain achieved six team podium places at the European Cross Country Championships in Tilburg on Sunday (December 9), although for the first time since 1997 will return home without any individual medals.

Boosted by gold in the junior women’s race, the team was fourth on the medals table. However, not since 2003 has another nation gone home with more medals than Britain and, as their medal tally was highest overall here, they can arguably still claim to be top country in Europe.

Turkey’s Yasemin Can took gold for the third successive year after a scintillating finish, while the Netherlands pipped Britain for the team title.

Can was prominent early on and soon seemed to be pulling away towards victory, opening up a three-second gap over the chasing Fabienne Schlumpf by 2.5km into the 8.3km race.

However, the Swiss steeplechaser reeled her in and towards the end of the sixth kilometre caught her. As the two fought it out at the front, former European junior champion Karoline Bjerkeli Grovdal and Netherlands’ Susan Krumins were clearly gaining over the last kilometre.

Grovdal, making up seven seconds on the leaders over the last 1300m, then left Krumins and seemed to have a chance coming into the finishing straight.

But Kenyan-born Can just had enough for a one-second victory over Schlumpf. Meanwhile, Grovdal, another second back, picked up bronze for the fourth consecutive year and became the first woman to win six individual medals in these championships.

Krumins, a double medallist on the track at the Europeans this year, was a further nine seconds behind in fourth – 29 seconds ahead of the next athlete. Melissa Courtney, Pippa Woolven and Jess Piasecki then followed in immediate succession. Kate Avery in 15th and Verity Ockenden in 20th completed a great overall performance by the British team.

Behind Krumins, Netherlands’ team win came in part thanks to Jip Vastenburg in fifth and Maureen Koster in 11th. A group of eight remained together after 6km of the 10.3km. This was whittled down to five as Turkey’s Aras Kaya and Kaan Kigen Ozbilen, winners the past two years, stretched them out.

Ingebrigtsen injected some pace with around 600m remaining but always looked like he had another gear as he held off Kimeli by three seconds.

Kaya claimed bronze, one place ahead of Ozbilen and Polat Arikan Kemboi made sure of Turkey’s team gold in seventh on 14 points – 20 ahead of GB.

Marc Scott, the 2017 NCAA 10,000m champion, led home the Brits in ninth. Kris Jones, a late replacement for the injured Andy Vernon, was an excellent 12th – just two places lower than at the trials. In 13th, Dewi Griffiths was the third and final scorer as he continues his comeback from injury. Next home for Britain was Charlie Hulson in 17th, while trials winner Ross Millington was 30th. Nick Goolab, who challenged the leaders early in the race, ended up 47th.

Alex Bell and Phil Sesemann brought Britain back into contention for a medal, however, in the end, Jess Judd lost out to Belarus in the battle for bronze as Spain held off France at the front. Williamson was in second when he went down 200m from the end of his 1200m stage.

With a 3:25 split, he handed over fifth behind France’s Alexis Meillet and then Spain’s Saul Ordonez. Bell, with a 4:23 1500m lap, brought Britain up to third, a couple of seconds behind the leaders, France’s Renelle Lamote and Spain’s Esther Guerrero.

Spain and France were together most of the way on the last stage before Spain’s Solange Andreia Pereira moved away for a 4:35 final stage, having to hold off a resurgence from Johanna Geyer-Carles at the end.

A report from the under-20 and under-23 races at the European Cross Country Championships can be found here.