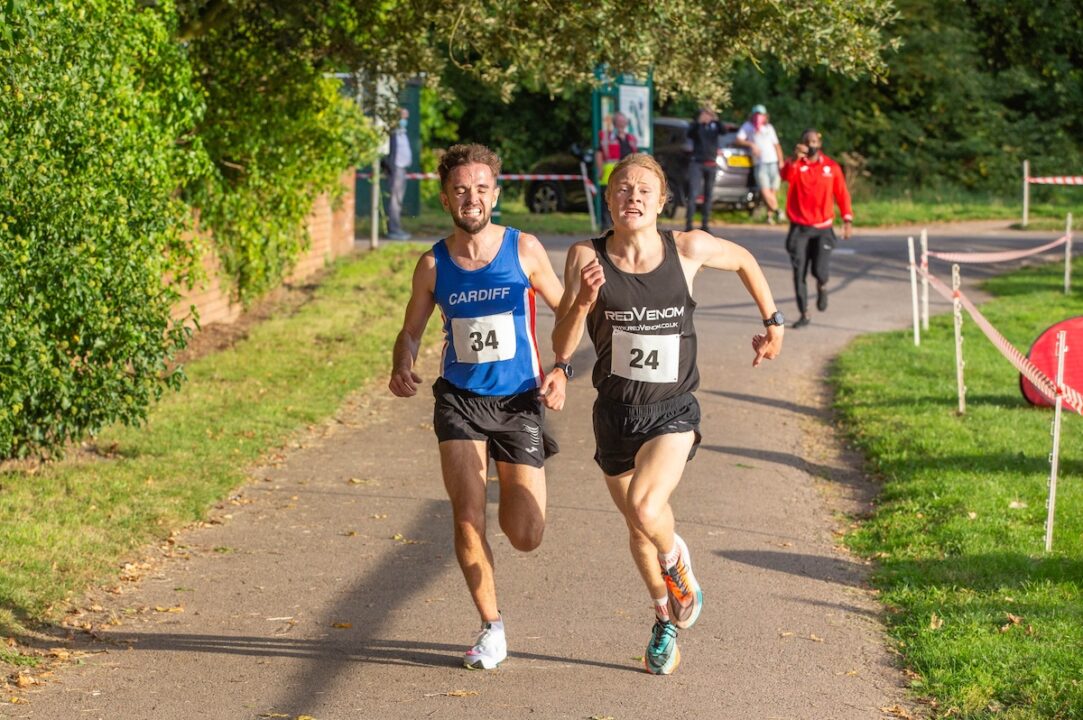 The socially distanced event in Blackweir Fields signalled a welcome return to the local racing scene many of the top Welsh distance runners.

Perrin made the trip from Anglesey count with a well-judged race that saw him claim a victory over a more experienced Matty Edwards of Cardiff AC.

The youngster from the Menai Track & Field Club was hoping to target his recent 14:30 P.B recorded at the Podium 5k but realised early on that a victory would be more likely with a wisely judged effort.

A sprint to the line

The pair turned on to the finish straight alongside each other but it was 17 year old Perrin that had more left in the tank, edging ahead for a narrow victory over the Belmont University alumni Edwards with both finishing in 14:35.

Swansea Harrier Guy Smith was the third athlete home in with 14:46 with Newport Harrier Abed Teweldebrhan fourth in 14:47 and Daniel Hamilton of San Domenico RC fifth in 14:49.

‘It was really nice to race again and especially on home turf in Wales’ commented Perrin. ‘The race was really tactical, really slow for the first 4k, around 15 minute pace and for the last kilometre I wasn’t sure how everyone’s kick would be so I just decided to go for it and see who would stick with me. I was ecstatic to take my first race win of the season’. Charlotte Arter’s victory was a clear sign that the Cardiff based athlete hasn’t lost fitness through the lockdown period. Her race was equally well judged, edging away from training partner Clara Evans around the half-way point.

Arter dipped just under the 16 minute mark with 15:59 in a first race since her Podium 5k victory in March.

Evans was next to finish in 16:25 less than a week after a 72:21 half marathon best in Antrim with another Cardiff athlete, Lucy Marland in third with a new P.B. of 16:54.

Alaw Beynon-Thomas of Les Croupiers RC was fourth in 17:06 with Kate Roberts of Swansea Harriers fifth in 17:19.

‘It was great fun to return to racing this evening at the Cardiff Sunset 5k’ said Arter.

‘It had been six months since my last race so it felt good to be back racing. I’m very grateful to Welsh Athletics for organising such a fun and safe return to road racing in Wales, hopefully the first of more in the next couple of months’.