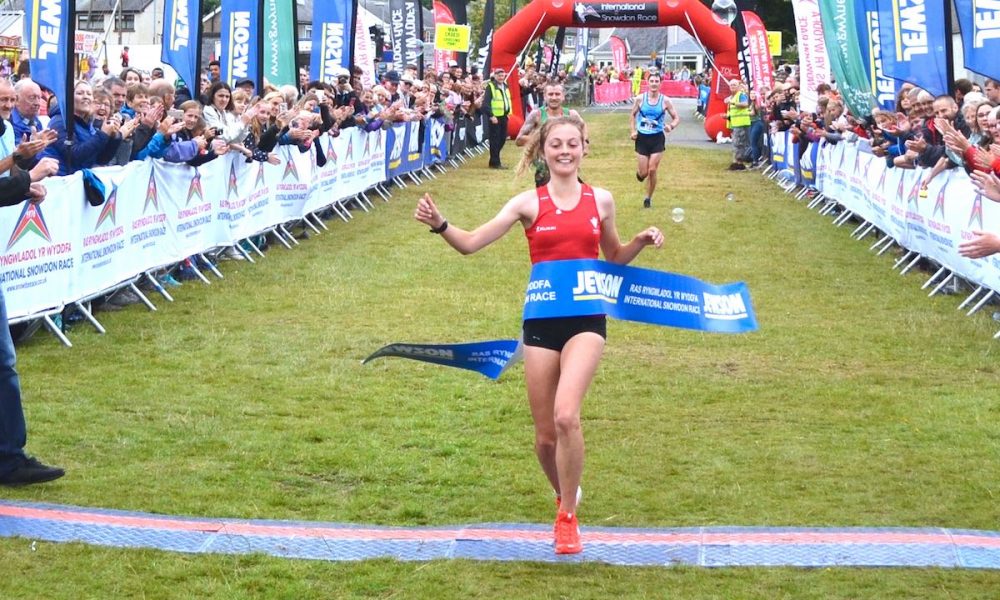 The local girl from Eryri Harriers etched her mark into the history of the popular mountain race described as one of the toughest in Europe, winning the 43rd edition of the race over the highest peak in England and Wales on Saturday (July 21).

Angela Carson was the last Welsh winner of the women’s race back in 1989 but Jenkinson who made her senior International debut finishing 12th at the European Championships last month had targeted a win in Llanberis over the 10-mile course.

Jenkinson had built a lead of over two minutes by the summit at the five-mile point which was covered in cloud but with conditions calm and relatively dry.

Soon after the race turns and descends back along the same path. It drops quickly and winds back down to the finish in the town described as ‘Wales’ outdoor capital’.

Jenkinson took the women’s win in 80:41, with Martha Grant the next lady home in 82:17, who was competing for Scotland but is based in Snowdonia. A clubmate of Jenkinson’s at Eryri Harriers, Grant descended quickly but was unable to make too much impact on Jenkinson’s healthy lead.

Sophie Noon from Cumberland Fell Runners was third leading her England team home but it was Grant’s Scotland team that scraped victory over England.

A delighted Jenkinson spoke following her victory saying: “I’m really happy to have won the Snowdon Race, it’s one of my favourite races.

“Since I was young I have really wanted to win this race because I live really close in Waunfawr. My next race is the trial for the world championships in two week’s time.”

Englishman Chris Smith had hoped to repeat his win in Snowdon from two years ago. The Londoner built a 40 second lead at the summit over countryman Chris Holdsworth.

However, despite being in third place at the turn-around point, Italy’s Alberto Vender came through the field on the descent and was the first man back to Llanberis in 66:41. His victory meant that Vender became Italy’s fourth winner here since 2014 and ensured that team victory belonged to the Italian men.

Holdsworth overcame Smith and Welshman Rob Samuel to take second and with Llanberis man Samuel scoring a first podium finish at the race in third.

10 fastest times at UK parkruns on Saturday 21st July (2018)
An Olympian, a top veteran and a prolific marathoner all impressed this weekend