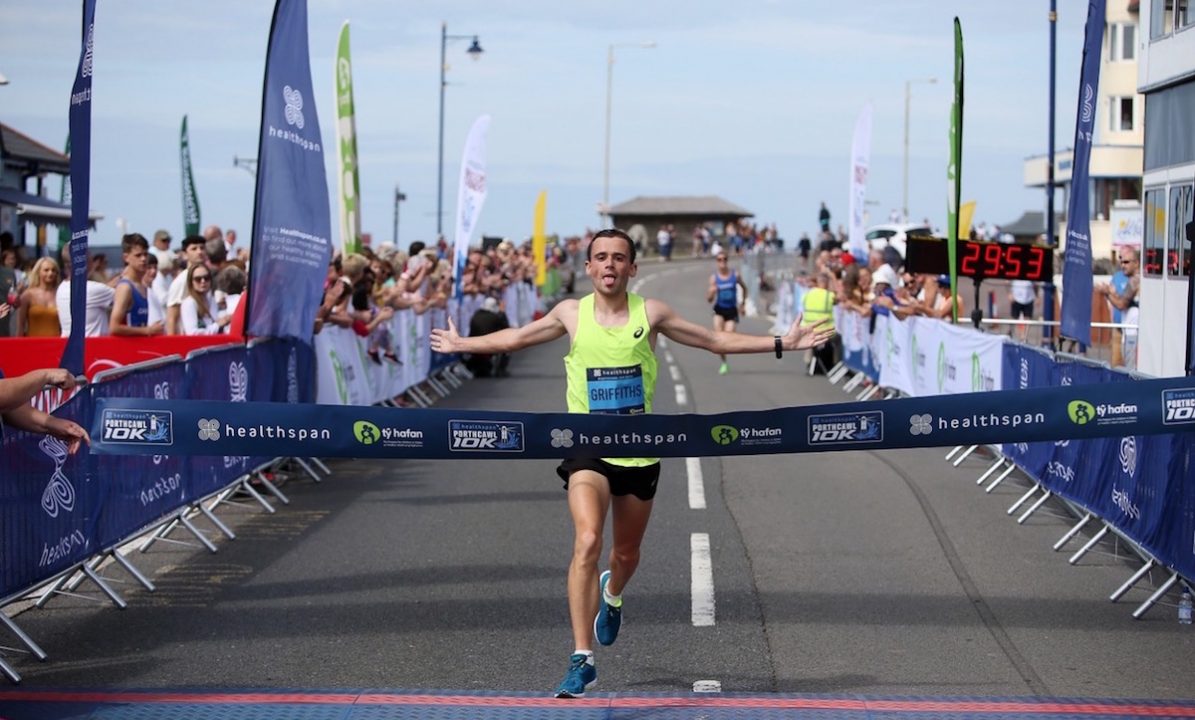 Welsh cross-country champion James Hunt motored to a lifetime best in the inaugural Healthspan Porthcawl 10K, but still found himself being overtaken by Swansea marathon expert Josh Griffiths in the final kilometre.

Griffiths, the Team Wales Commonwealth Games and Team GB World Championships marathoner found himself trailing at the half-way mark in the spectacular new event on the seafront at one of Wales’s most popular resorts, but had the strength to hit back and post another notable victory.

“James took it out and made me work really hard. I didn’t get ahead until the final minute and it was his first time under 30 minutes, so hats off to him,” said Griffiths, the Welsh 10K road champion.

“The support all the way around the course was simply fantastic and some of the best I’ve had around Wales and it was the perfect setting. I wanted to kick on in the Healthspan Wales 10K Series so I’m happy I got the victory.”

So close, but so far

While Griffiths was able to chalk up his first race win of the year at the third leg of the Healthspan Wales 10K Series, Cardiff AAC runner Hunt was left with the bittersweet feeling of having run the race of his life, but still coming home in second place. Not that he was too bothered – he pocketed a £200 cheque to take away on holiday with him later this month.

“Josh just came on strong in the last kilometre and I couldn’t hold onto him. I was leading at half-way and I’d dropped the group,” said Hunt, who was able to celebrate a 20 second PB.

“I was out in front, couldn’t hear anyone behind me and I thought I was going to stay away. But Josh is a solid runner and came back at me.

“The support I had around the course was unreal and this is a major breakthrough for me. I feel as though I can go on and push my boundaries again.

“I did my first half for a while in Swansea a few weeks ago to build up my strength and that clearly helped me. Now I can look forward to the Cardiff 10K and maybe even the Cardiff Half Marathon in October.”

There were almost 4,000 runners on the start line and when they finally got away at 10.30am the conditions were perfect. The tide was in, the sun was shining and Welsh sporting legend Iwan Thomas got everyone underway.

Marathon specialists for the win The women’s race was also won by a marathon specialist in Natasha Cockram. The winner of the inaugural ABP Newport Wales Marathon last year, she led home the experienced Jenny Spink, a former British World Half Marathon Championship athlete, to take the tape in 34:51 to win by 29 seconds.

“I’ve struggled a bit with injuries over recent weeks after running in the London Marathon. I ran when I probably shouldn’t have in London and I had to take a couple of months off afterwards,” said Cockram.

“But I’ve been back running again for the past three weeks and I’m just happy to be back racing again. It wasn’t about the time, and It wasn’t that quick, but for me it was just about getting back into a race.

“We were pretty much together in the first half, but then I felt her dropping off a bit and just pushed on. I can’t thank my physio enough for getting me back after the knee injury, and also Welsh Athletics and Sport Wales.

“The aim is to run a marathon again later this year, but before then I want to do a few more 10Ks and maybe the Cardiff Half in October.”