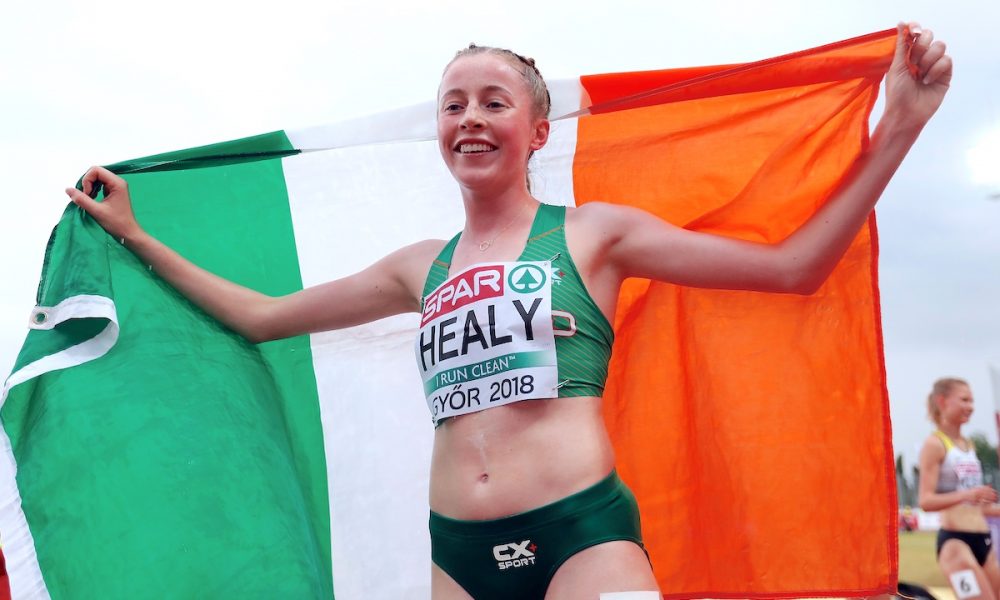 The young runner bags Ireland’s first medal at the championships in Gyor as she targets a distance-running double.

Sarah Healy made it look easy as she won girls 3000m gold for Ireland on the second day (July 6) of the European U18 Championships in Gyor, Hungary.

The 17 year-old Irish star was relaxed in the early laps before she increased the pace to open up a huge gap over the final two laps and took victory in a championships record 9:18:05.

Healy ran a blistering 2:57 in the final kilometre and still looked at ease as she crossed the line to win her second race of the day, having earlier won her 1500m heat in 4:30.19. It was a new Irish youth outdoor record for the Blackrock athlete who now tops the European U18 lists in the 800m, 1500m and 3000m.

“I wasn’t always planning on doing it but I decided: why not?” Healy said afterwards.

Sarah Healy produced a final kilometre of 2:57 to win the 3000m title at the European U18 Championships in a championship record of 9:18.05. pic.twitter.com/KvbJX22X4E

Healy, who tops the 1500m rankings by 10 seconds after her recent 4:09.25 run in Tubingen, Germany, will next race on Sunday in the 1500m final where she will aim to win a fantastic second gold medal.

After her June performance in Tubingen, Germany the youngster moved to second on the European U18 all-time list behind Romania’s Ana Padurean who ran 4:06.02 in 1982.

In May, the Blackrock AC youngster ran the fastest time ever by an Irish U18 athlete when she clocked 4:13.32 in Belgium to break Ciara Mageean’s best of 4:15.46.

On the same track last year she also won 1500m gold at the European Youth Olympics.

Meanwhile, Patience Jumbo-Gula was disappointed to finish fifth in the girls’ 100m final in 11.87 but it was still a fantastic championship for the rising sprinter.

Rhasidat Adeleke was first of the Irish in competition on the evening session and she qualified in second in her 200m heat in 23.90. Running blind in lane eight it was a solid start to Adeleke’s championships with the semi-finals coming up.

Sophie O’Sullivan had a great burst of speed to qualify for the final of the 800m. She eased off the throttle in the final metres to finish second in 2:07.95.