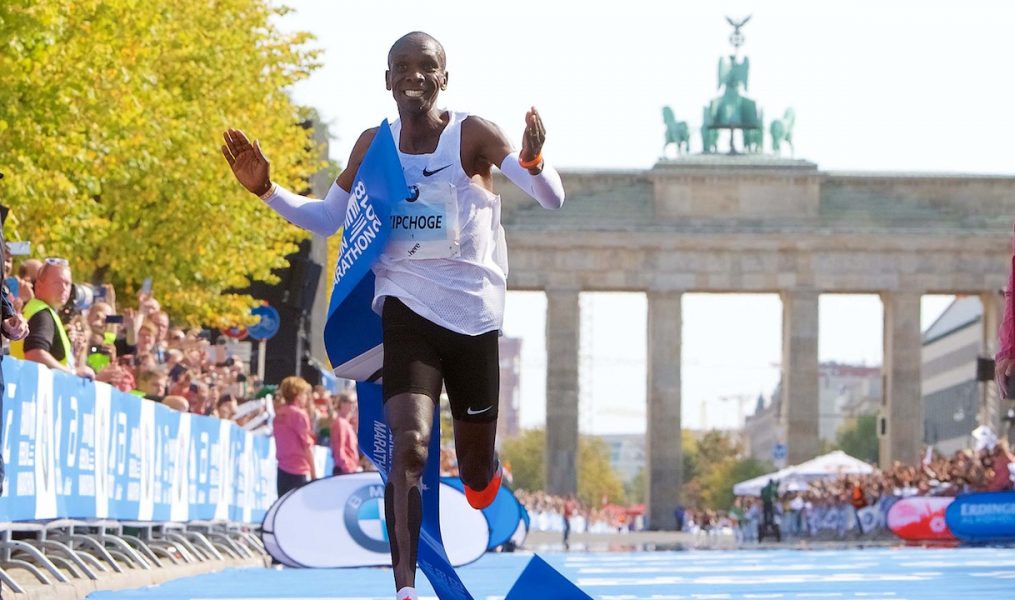 The marathon titan etches his name into the history books as Gladys Cherono wins the women’s title in Berlin.

Eliud Kipchoge clocked 2:01:39 to become the fastest marathoner ever as he stormed to victory at the Berlin Marathon on Sunday (September 16).

The Kenyan star took an amazing one minute and 18 seconds off the previous world record of 2:02:57 set four years ago in the German capital by his compatriot Dennis Kimetto.

“I am really grateful and happy to smash the world record,” said the marathon king after the race. “They say you can miss two times, but you can’t miss a third time. Thank you to everybody. My only word is thank you.”

Defending his title in Berlin, Kipchoge went through 5km at 14:24, before hitting the halfway mark in 61:06 over a minute ahead of former world record holder Wilson Kipsang and Amos Kipruto.

Racing on his own after the pacer makers dropped out in the second half of the race, the 33 year-old increased the pace going through 35km in 1:41:02, well ahead of his rivals, and looked calm and relaxed, showing off his trademark smile as he picked up drinks at water stations.

The humble, and now truly the greatest marathoner of all-time, crossed the line in 2:01:39 to smash the world marathon record.

Kipchoge, who clocked an unofficial 2:00:25 in Nike’s Breaking2 attempt in Monza last year, celebrated his achievement alongside adoring fans and will leave Berlin with many dreaming of a sub two-hour marathon one day.

Gladys Cherono won the women’s race in a course record time of 2:18:11.

Cherono lead from the 25km mark after Tirunesh Dibaba dictated the early proceeding, with Ruti Aga never far off the pace.