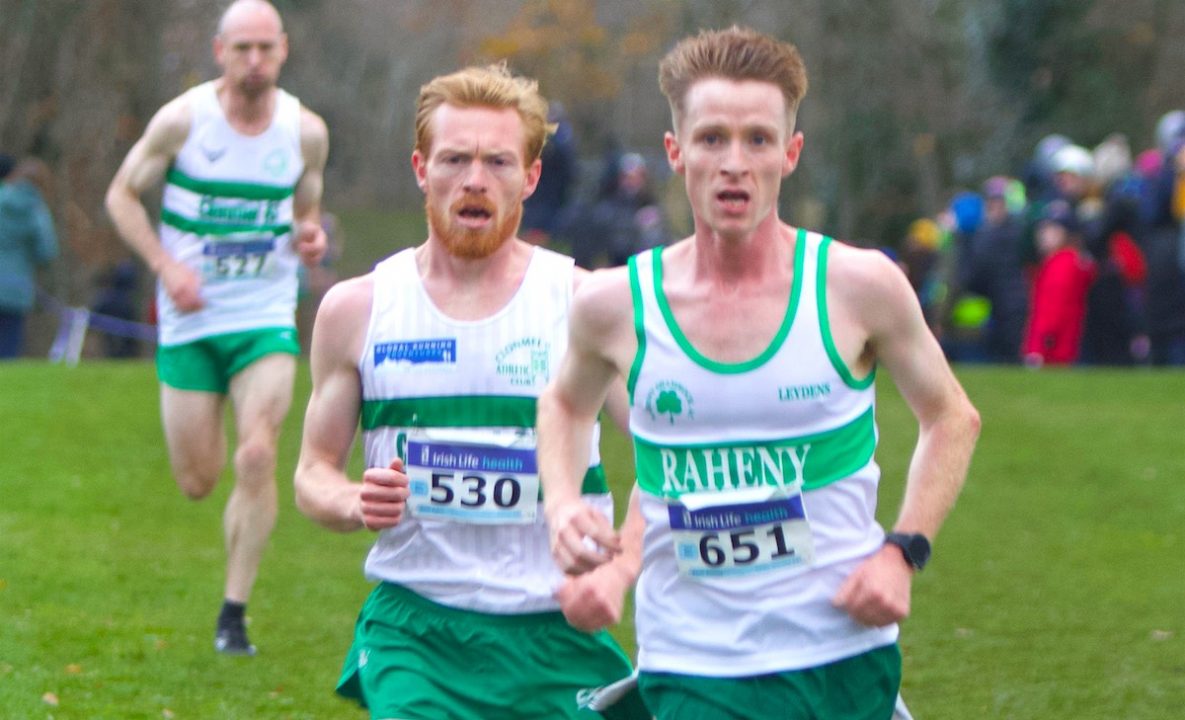 Mageean, running in UCD colours, was first up in the women’s 8km and was part of the lead group of five that broke away early. Soon that group was down to two with the Irish 1500m specialist joined by Fionnuala Ross of Armagh AC.

Shaughnessy dropped out of the race while Doherty and Treacy fell back, leaving McGlynn to chase the two leaders. Moving up through the field were Michele Finn of Leevale and Newcastle’s Kerry O’Flaherty. With a lap to go, Mageean pulled away from Ross, with McGlynn in third place ahead of Finn and O’Flaherty. There was no catching Mageean at this stage but in the battle for second place, McGlynn caught Ross in the chase for the line.

For Mageean, who had finished third behind Shona Heaslip and Kerry O’Flaherty in 2016, it was a magnificent victory and makes her that rarest of athletes to have won national titles both indoors and outdoors on the track and now also in cross-country in one year.

First U23 was Fian Sweeney of Dublin City Harriers, who finished 16th overall. Sorcha McAllister of Westport AC was second and Cliona Murphy of DCH third.

Leevale, with a team including American-born Dylan Hassett in eighth place, retained the team title. Letterkenny AC was second and North Down AC third. Donegal beat Dublin for the team title with Laois third.

“I’m absolutely delighted. It’s been a good year for me – I suppose the best for national titles and to go out and win my first national cross title is something special,” said Mageean, who will lead the Irish women’s team at next month’s European Championships in Tilburg. “We always put out a good team for the cross, so I hope we’ll be battling for the medals again.” In the men’s 10km, Sean Tobin of Clonmel AC declared his intentions from the start by moving to the front, but on his heels was Raheny Shamrock’s Dooney.

Not far off the pace were Donore’s John Travers and Kevin Maunsell of Clonmel AC. Leading a pack of chasers was Damien Landers of Ennis TC.

Dooney, who has been sharing his journey this year on Fast Running, missed out on the entire outdoor track season with an injury, and focussed his training in recent months on the cross country championships.

He was running a smart race and when he noticed that Tobin – an old rival from their schooldays – was struggling in the muddy section of the course, he attacked on that stretch with about two laps to go.

Although he quickly built up a lead of about 20 metres, Dooney powered on, aware that Tobin would fight back if he could. Tobin certainly did his best but it was the Raheny man’s day. RELATED: Kevin Dooney – Why I love and hate this time of the year

Finishing a solid third was Maunsell, while fourth and fifth were Brian Fay of Raheny Shamrock AC, who was running in the U23 ranks for the first time, and Irish marathon champion Mick Clohisey, also Raheny Shamrock. Holding on for sixth was Landers.

In the U23 race, Paul O’Donnell of Dundrum South Dublin was second behind Fay and Cathal Doyle of Clonliffe Harriers third.

With Mark Kirwan making up the team, Raheny won the men’s title ahead of Clonliffe Harriers and Clonmel. First B team was North Belfast Harriers. With six athletes in the top ten, Dublin finished best of the counties.

“I enjoyed that. I was injured early on in the year and only got back training on June 1 with this race the target,” said Dooney after the race. “I knew Sean was the man to beat and so I decided to sit on him and even when I passed him, I knew he wouldn’t let up.

“I’m looking forward to running at the European Championships for a seventh time between junior and senior – and maybe getting a place in the top 20.”

There was less drama in the junior races with pre-race favourites Sarah Healy of Blackrock AC and Bantry’s Darragh McElhinney living up to their billing. In the women’s 4km race, Emer O’Brien of Sli Cualann AC set the pace early on but Healy soon took over in front for a comfortable win. O’Brien was second and Jodie McCann of DCH AC third. Defending champion Laura Nicholson of Bandon AC was fourth.

McElhinney was an equally comfortable winner of the men’s 6km, sitting on Dublin champion Sean O’Leary’s heels early on before making his move. O’Leary held on for second and had the consolation of leading Clonliffe Harriers to team victory. Jamie Battle of Tullamore Harriers was third, ahead of Fintan Stewart of City of Derry Spartans. McCartan was followed home by his training partners Conall Kirk of Annadale Striders and Jonny Whan from City of Lisburn.

Gareth Lyons won the masters’ race with Iain Taggart of Ballymena Runners and Stephen Nicolson in the minor placings. The races were the third round of the Northern Ireland Cross-Country League

Martin Cox ran 16:10 at the Omagh parkrun to record the fastest men’s time across the island of Ireland this weekend, while Annette Kealy was once again the quickest of the women after running 18:28 on her 73rd visit to the Malahide parkrun.

The Irish parkrun top 10 can be found here.