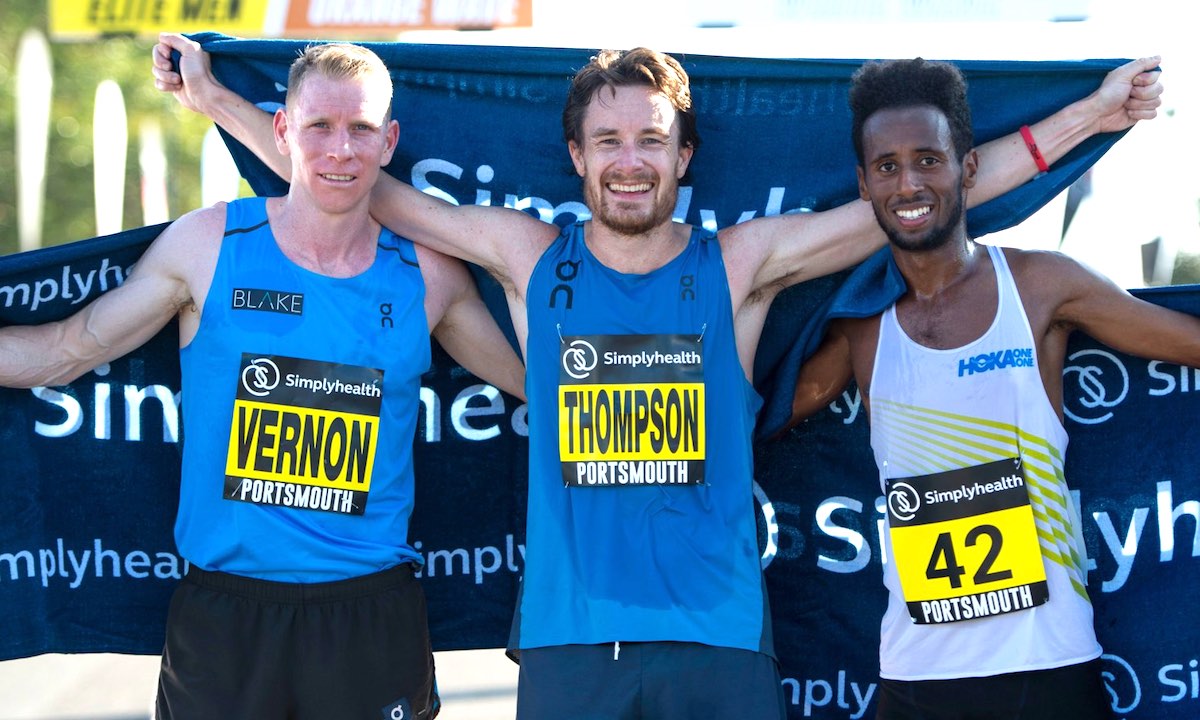 British athletes impress at the Great South Run and the Toronto Waterfront Marathon, while the regional cross country relays are among the other top events.

Chris Thompson enjoyed a historic third victory at the Great South Run in Portsmouth (October 21) to beat Andy Vernon by a comfortable margin and a big PB, while Eilish McColgan debuted over the distance with a win over Steph Twell and Gemma Steel.

Thompson’s winning time was his fastest by 27 seconds when he crossed the line with a big smile in 46:56 in unusually still conditions for this seafront event.

He pulled away from Vernon at around the seven mile mark, up until which point the two Aldershot, Farnham & District athletes had been head to head.

The victory will give the affable Thompson a boost ahead of his forthcoming run in the New York Marathon on November 4. Look out for a Fast Running interview with the 2:11 marathoner this coming week!

Vernon also scored a big PB of 47:29, his first time under the 48 minute barrier, beating his old mark by 30 seconds. Thames Valley’s Petros Surafel was third in 48:05.

Dundee Hawkhill’s McColgan was a convincing winner in her first attempt at the distance following an impressive year on the track. Although she too enjoyed a tight battle with AFD’s Twell, she also pulled away in the closing miles to take the win in a debut 54:43 to Twell’s 55:16.

Steel did well to put her recent health concerns to one side and clock a 56:56 result and cross the line with her trademark grin to reassure her coach, Liz McColgan that all was well after her endeavours.

The England team excelled themselves at the Toronto Waterfront Marathon (Oct 21), with international debutant Hayley Carruthers the stand out performer when she knocked an incredible 11 minutes off her PB to run 2:36:47.

The Rotherham Harrier is coached by Gary Warhurst, and spoke to Fast Running recently about her training this year, having only started running seriously less than a year ago. Tonbridge’s Henry Pearce was another English athlete to enjoy a stunning performance with a 2:19:22 result on his first attempt at the distance.

Friend and Olympic athlete Jake Wightman was understandably over the moon for the youngster when he tweeted: “Sub 2:20 in first full marathon, whilst balancing studying and training over the past month. What a hero!”

Huge run @HenryPearce94 👏🏼👏🏼👏🏼
Sub 2:20 in first full marathon, whilst balancing studying and training over the past month. What a hero.
(📷: @SusanWightman6) pic.twitter.com/wnMKcey7md

The race was clearly one for fast times as England’s fourth entry, Crawley’s James Westlake, also ran a PB with a 2:23:05 result. Well done Team England!

One final result that must be mentioned is Ireland’s incredible Paul Moran, who ran a superb 2:44:15 – he is 55 years-old!

Returning to British shores, athletes were also in action on the Portsmouth harbour front the previous day, taking on the Great South 5k (October 20).

Poole AC’s Jed Skilton was second in 16:12, also a PB for the teenager, while the City of Portsmouth’s Jonny White’s 16:20 was a lifetime best by more than two minutes!

AFD’s Lauren Hall won the women’s race in 17:24, which was down on her 16:57 PB but good enough for victory on the day. Sonja Vernikov was second in 17:59 while the City of Portsmouth’s Rhiannon Dunlop was one second ahead of her PB with 18:06 for third. Rotherham Harriers’ A and B teams filled the top three finishing positions at the Northern Cross Country Relays at Sheffield but were only awarded the A team’s gold medals as B teams are not eligible for prizes. The northern powerhouse club’s winning A team consisted of Natasha Hatswell (11:37), Nicola Devine (11:53) and Lori Handbury (12:14). Lincoln Wellington were second while Hallamshire Harriers were boosted up a position from fourth to third ahead of Rotherham’s B team.

At the time of going to press, official results were unavailable for the Midland Cross Country Relays.

Marshall Milton Keynes’ Paul Mizon and Cambridge & Coleridge’s Chris Darling enjoyed a competitive fight for the title at the Cambridge Town & Gown 10k (October 21), with Mizon coming out on top with 31:38 to Darling’s 32:00. Johannes Arens was third in 32:43.

Dave Norman, who features on Fast Running among the Fast 10: class of 2018, was a worthy runner up at the Green Drive 5m (October 21) when he finished second behind Rob Danson in 25:59. No further results were available at this time.

Good fun chasing @radanson around Lancashire country lanes this morning at the Green Drive 5. With Rob having run 3mins faster than me for 10k this year (30:50 vs 33:33) and 50secs for 5k (14:36 vs 15:26) this was a step outside of the comfort zone and a test of recent progress. Spent 4 miles locked together, with a 20:32 split but couldn’t match Rob over the final mile back down Green Drive. 2nd place in 25:59. Onto the Leeds Abbey Dash next

Nicola Curtis and Matty Smith were victorious at the Anna Verrico Half Marathon (October 21), with Curtis only recently having returned from Malawi.

The Scunthorpe runner was one of just 20 British people to spend 10 days with Dame Kelly Holmes as part of the Orbis Challenge, a mission to use sport to make a positive impact on poor communities in the country.

Super veteran Lynne Higgins ran surely one of the fastest ever times for a V60 when she was second in 90:31, with Natalie Harris in third in 91:56.

The UK’s 10 fastest parkrun times were headed up by Elsey Davis and Paul Martelletti this week, see here for the full report.