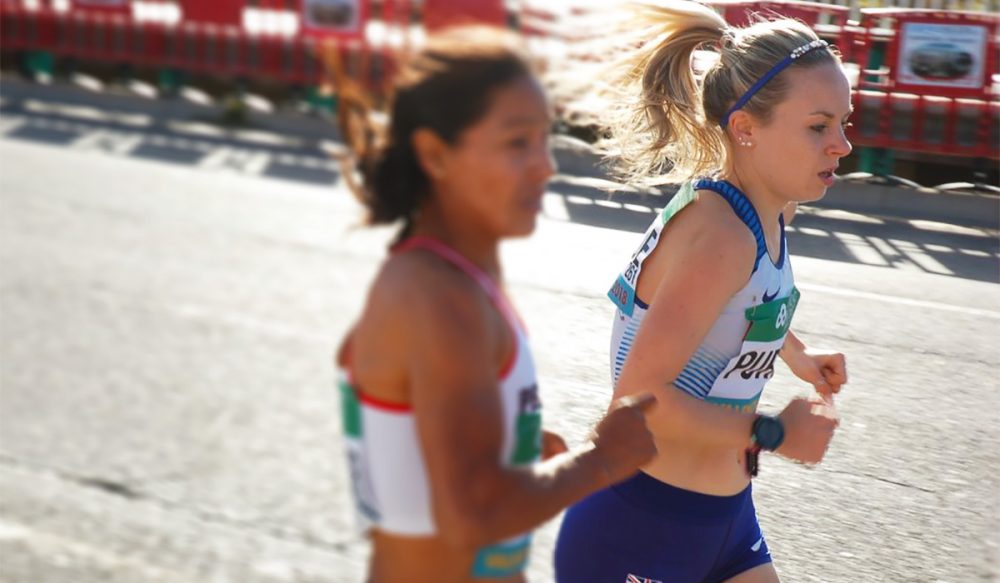 Charlotte Purdue and Mo Aadan were the top finishers for Great Britain at the World Half Marathon Championships in Valencia on Saturday (March 24).

Charlotte Purdue ran a gutsy race to finish in 21st place, with Ethiopia’s Netsanet Gudeta storming to gold to break the women’s only world record.

The conditions were a mix of warm, windy and occasionally wet, and with a lead group of four women inseparable up to the 10km mark, Gudeta decided to make the decisive move at the halfway point.

Gudeta showed no signs of slowing and by the 20km mark had built up a 40-second gap on world record holder (with men) Joycilene Jepkosgei and her Kenyan teammate Pauline Kamulu.

In the closing stages, the lead was further extended with Gudeta crossing the line in 66:11 to set a new women’s only world record.

Despite clearly struggling Jepkosgei battled from behind to win silver crossing the line in 66:54, with teammate Kamulu taking bronze in 66:56. 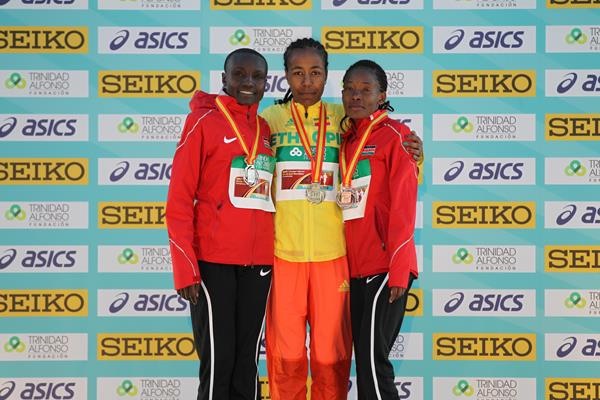 Leading the British charge from start was team captain Purdue and by the 5km mark was in 29th place. The 26-year-old battled the wind and worked her way up to 22nd by the 10km spilt coming through in 33:32.

Purdue, who set a one-minute PB of 70:29 to win the Big Half earlier this month, moved up one place after halfway and held that position to cross the line in 71:21 for 21st.

“I was hoping for a personal best but it was very windy out there so I just wanted a solid run. It is not the best time but it was solid. I wanted to get out of trouble so the first mile was pretty fast but after that I slowed down a bit, said Purdue afterwards. “Two years ago, I was 33rd so to be 21st is an improvement, I guess I am happy.

“I could see Japanese runners ahead of me at the end and I was trying to catch them but I didn’t have anything left. I loved being the captain, I was running out there and I was thinking I’ve got to do well because I am captain and I have got to remember this race. It made me push that little bit harder.”

Third place at the Big Half, Charlotte Arter, ran a good race to finish in 31st clocking 71:52, 21 seconds outside her recent PB in London.

Running in her fourth half marathon of 2018 Tracy Barlow ran a fantastic PB of 72:35 to finish 43rd. The World Championships marathoner at London 2017, took over a minute of her season’s best and 13 seconds of her personal best.

Demonstrated racing has been key this year ahead of the London Marathon Barlow has shown consistent improvements in every race with 74:28, 74:25, 73:36 and 72:35.

Kamworor wins three in a row and big PB for Aadan

The men’s race started slowly and a group of 30 men were within seconds of one another at the halfway point. But with 15km to go Kamworor showed why he is undoubtedly one of the best of his generation, breaking away to run a devastating 5km split of 13:01.

Coming down the beautiful setting for the race finish the NYC marathon champion crossed the line in 60:02 for a 20-second win. 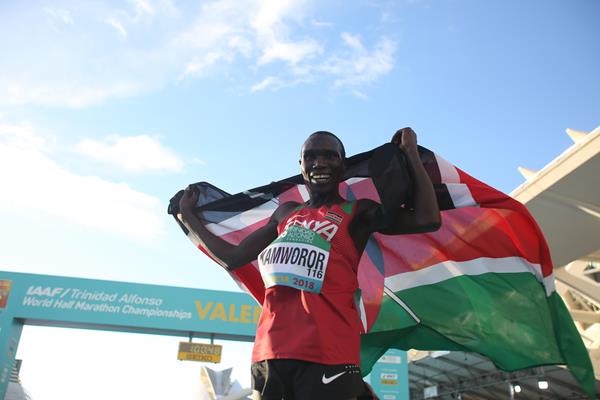 Ben Connor was the earlier leader in British men’s team in 42nd at 5km, with British senior debutants Aadan and Luke Traynor a second behind.

As the race progressed Traynor, who ran a fantastic PB in Barcelona in February along with Connor, fared better in the conditions and was in 31st place by 15km, with Aadan on his heels.

In the closing stages, it was Thames Valley’s Aadan who stepped up the pace to cross the line in a big personal best of 62:34 for 36th place. It took over 40 seconds off his previous best set last month in Granollers.

“It is really wonderful and really good. The first two, three, four miles there was a lot of pushing and shoving so it was tough, especially with the wind. It started raining as well but I gradually increased my pace, said Aadan. ” It was tough and painful but well worth it.

“The field was very, very good but very enjoyable. I have some things to learn from in terms of pace and who you are racing with. The experience has been great and I hope to get qualification for the European Championships in the 10,000m in the summer.”

Dan Studley, the third member of the British team making their senior international debut, placed 103rd in 66:20 while Tsegai Tewelde did not finish.