British middle distance is on fire 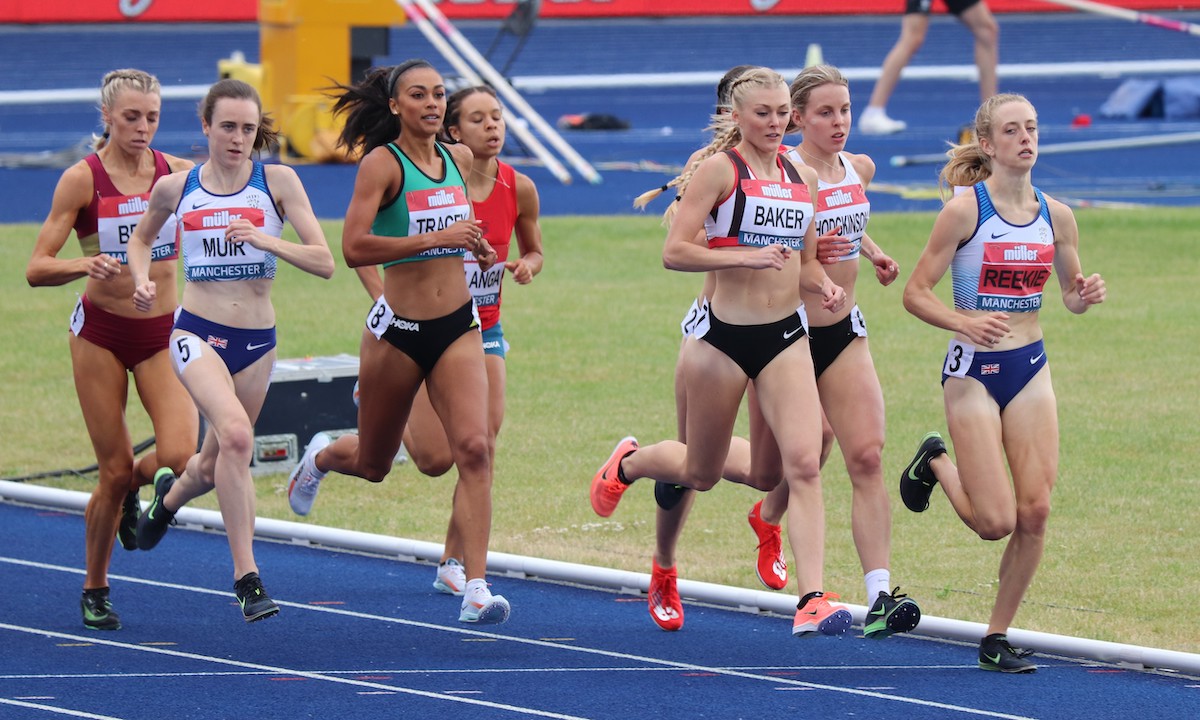 This weekend saw the British Championships, which also doubled up as the trials for the Tokyo Olympics.

As an athletics fan, it is one of my favourite weekends of the year – it comes with elation, heartbreak and some phenomenal performances, and this year was no different.

The athletes brought their a-game to the Manchester Regional Arena, and I was lucky enough to be in the stands for Fast Running to capture everything that took place. Allow me to take you on a run-through of what happened from a middle-distance perspective and, I can assure you, plenty happened.

I’ll start with the 800m and 1500m, the most anticipated races across all the track and field disciplines.

As the season has gone on, there have been two races that I have looked forward to more and more this weekend, the 800m finals. Sometimes you can look forward to something so much that, whatever actually happens, it feels anti-climatic. Not to overplay it but, one thing is for sure, that did not happen. I do not think you will find two better races to showcase the depth and quality of British middle-distance running; please indulge me as I take you through what happened.

The heats took place on Saturday, three heats for each. First two automatically qualified for the final, and two non-automatic based on time.

The first heat featured all three of the podium from the 2019 European U20 Championships, Oliver Dustin, Ben Pattison and Finley McLear. Spookily, the race was a carbon copy of that race in Boras, the same finishing order – Dustin (1:47.74), Pattison (1:47.87), McLear (1:47.88), and McLear falling across the line just as two years ago.

The third heat also followed the form book, with Elliot Giles (1:47.28) and Jamie Webb (1:47.61) and Elliot Giles finishing first and second, having overtaken long-time leader Thomas Randolph at 600m, who put in a valiant effort to finish with 1:48.04.

Similarly, the women’s heats went exactly as expected, with the eight fastest athletes on paper making it through to the final (first two in each of three heats alongside two non-automatic qualifiers).

The first of three heats featured Jemma Reekie, the fastest on paper this year (1:58.27), Adelle Tracey and Isabelle Boffey, who has improved her PBs over 400m, 800m and 1500m this season.

This turned out to be the fastest heat by some margin, although the second was faster at the halfway point (1:02.07), led out by Ellie Baker ahead of Laura Muir. Exerting as little energy as required, these two took the automatic spot, Laura with 2:05.41 to Ellie’s 2:05.68. Ejiro Okoro was third in a SB of 2:06.58.

The final heat included European Indoor Champion Keely Hodgkinson and sub-1:59 runner Alex Bell. As expected, these two led from the gun, going through the bell in 1:06.63 with Olivia Vareille in third and Khahisa Mhalanga in fourth. A noticeable gap emerged to third place by 600m, with Alex finishing in 2:05.79 and Keely 2:06.03. Khahisa finished well to cross the line in 2:06.56, making the final by only 0.02 seconds!

Both promised exciting races, with the top two guaranteed a spot at the Olympics (if holding the standard). With unprecedented depth (six women have run under XX this season, a record), the women’s final was always going to be a tactical affair. The field went off at a rapid pace, passing through 200m in 27.19, before slowing right down to go through the bell, bunched, in 1:01.77.

Laura Muir, choosing to run the 800m in favour of the 1500m as she sought to double up in Tokyo, put in a decisive-looking move with 300m to go, quickening to 1:30.64 at the 600m point. She was closely following by fellow Scot and training partner Jemma Reekie and you could be forgiven for thinking the two fastest in the field would hold onto the automatic Olympic spots.

However, we were not done!

Into the home straight and Keely Hodgkinson put in a hugely impressive burst of speed to overtake both, claim her third successive British title (2020 indoor and outdoor) and confirm her spot at the Olympics with 1:59.61, ahead of Jemma (2:00.12) and Laura (2:00.24).

Maiden Olympics beckon for both youngsters, whilst Laura will have to wait until tomorrow’s selection announcement to know if she has been awarded the third discretionary spot in the team. It could be anyone for the win

Just ten minutes later it was the turn of the men, in a race near-impossible to call, with half of the field running under the Olympic standard this year (Giles, Dustin, Webb & Rowden) and another running it in 2019 (Langford).

Much like the women it went off fast, going through 200m in 24.67 and 400m in 51.52, with Josh Lay leading – one could suggest as a pacemaker for teammate Daniel Rowden. The group passed 600m in 1.18.28, with Elliot Giles, the only member of the field with Olympic experience, and Rowden pulling a small gap.

However, all eyes were on Oliver Dustin who, just two weeks ago in Nice, ran a ridiculous last 200m to finish in 1:43.82 (and break Seb Coe’s British U23 record, run the fastest Brit outdoors since Andrew Osagie at the 2012 Olympics and jump to sixth on the all-time list).

Sure enough, he produced his now-trademark strong finish to lead a close battle to the finish line.

A truly incredible race with Elliot and Oliver clearly delighted to book their Olympic spots. After an impressive season, it seems likely Daniel will be given the third spot.

A shout out also to Ben Pattison who went into the race with the slowest PB but revised this to 1:45.93 to finish fourth. The 1500m races also provided scope for superb performances. Again, they did not disappoint.

With the absence of Laura Muir and Eilish McColgan, the two fastest women this year over the distance, all eyes were on Katie Snowden. The only athlete in the field to have run under the 4:04.20 standard this year, Snowden could confirm her spot in Tokyo.

With ten of the fastest 15 women this year not racing this distance (primarily in the 800m or 5000m instead) and a three second advantage in PB to the rest of the field, it seemed a potentially straightforward task.

However, with PB-setting Revee Walcott-Nolan, Erin Wallace and Holly Archer in the field but shy of the standard, it wouldn’t be a walk in the park. It’s worth noting at the outset that Sarah McDonald also held the standard from 2019, but had not raced since the World Championships in Doha with injury.

No surprises that the four non-automatic qualifiers came from the second heat, included Niamh Bridson Hobbard in a new PB.

Despite three athletes chasing the Tokyo standard, it was not particularly fast from the start; although Revee looked to show her intent in the first few strides, she slowed down and the field re-bunched after 100m. Hitting the bell in 3:06.28, Snowden took the lead with an overtaking tennis match ensuing between her and Erin Wallace for the next 200m. A good finish from Walcott-Nolan, and no drop in effort from Wallace saw them cross the line first and second, 4:08.41 and 4:08.52 respectively, with Katie taking bronze (4:08.62).

Revee and Erin are without Tokyo qualifiers, and so not automatically selected. But it leaves Katie with a nervous wait to see if she will be selected. It is expected, I’d say, but you never know especially given the clear intention of Laura Muir to double.

Jenny Selman, Lucy Robinson and Cari Hughes all set lifetime bests to finish fourth to sixth. Contrary to the results page, Kate Avery’s 4:17.56 was not a PB.

More men starting with the standard

Whilst only one had run under the Tokyo standard in the women’s race, it was a different story for the men with five in action having gone under the 3:35.00 mark. Any of Josh Kerr, Charlie Grice, Jake Heyward, Jake Wightman and Piers Copeland had a chance of taking the title, with James West, George Mills and Archie Davis also in good form in 2021.

Across four heats there were no shock casualties, with Josh Kerr the fastest in the early round (3:44.46).

The race followed what appears to be tradition at the British Championships – a slow first 800m and a last lap sprint. The field, led by Brighton Phoenix’s Archie Davis passed the first 400m in 63.46, with a chance at the front to a leading trio of James Young, Tom Mortimer and Jake Heyward at 800m (2:05.86).

The bell was reached in 2:49.29, with Heyward, Grice, Wightman, Kerr and Copeland at the front. Josh Kerr put in a strong and decisive-looking move on the final back straight with 200m to go, but fellow Edinburgh-AC athlete Wightman able to respond.

The pair were running almost identical strides in the home straight, with Kerr just getting the better of the two, finishing in 3:40.72 to 3:40.77. Two clubmates securing their Olympic places and clearly delighted with the outcome. Having finished in a 51 second last lap, I imagine the adrenaline of making their first Olympics team was outdoing the lactic in their legs.

Jake Heyward was third in 3:42.41 and has a nervous wait for the team to be announced.

I feel I need a lie down just after re-reading this. Four superb races, and excellent athletes to represent Team GB in Japan in early August. A second piece will follow on the 5000m, steeplechase, race walk and junior 3000m races for you to look forward to!

Back to the races
65 Athletes nominated for Olympics