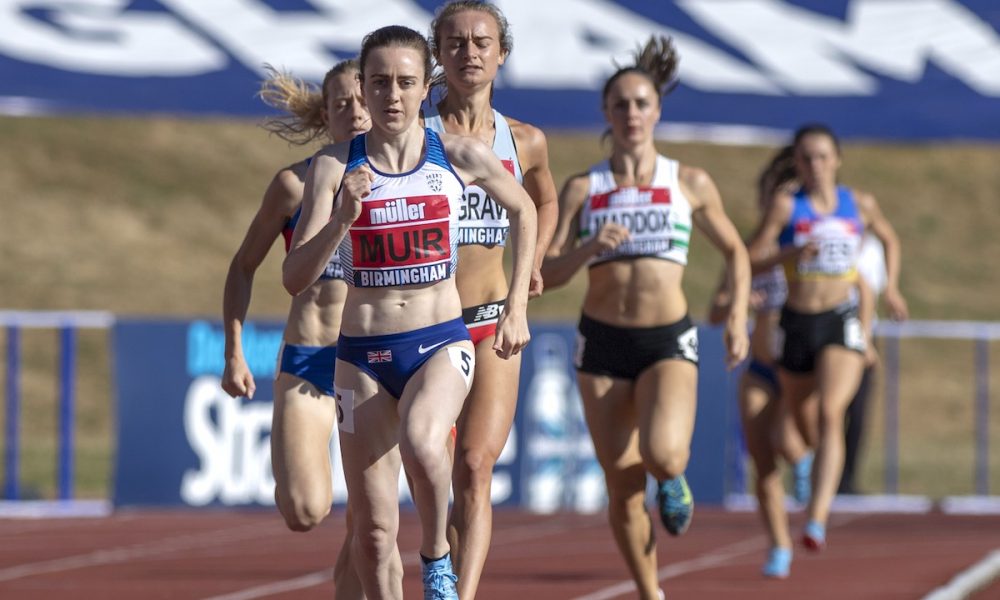 Stewart McSweyn became the first Australian to win the historic Emsley Carr Mile as a sizeable crowd flocked to the Alexander Stadium in Birmingham for the Müller Grand Prix on Saturday (August 18).

As is tradition for the winner of the one-mile showpiece – an annual invitational race that has been held in the United Kingdom since 1953 – McSweyn had the honour of signing a page of a leather-bound book featuring the signatures of every single winner of the race and was presented with a glass trophy.

To add to his achievement, McSweyn had also ran a personal best of 3:54.60 on his way to the win and it was only the second mile race he has ever run.

“It is only the second mile I have ever officially done, I have never raced here before so it was going to be a good experience no matter what,” he said afterwards. “But to perform well and get a PB I am pretty happy with that.

“The track was crazy good, I like it because the crowd sounds really close. When you are running in lane one, it sounds as they are in lane three or four, right on you. I definitely want to do it again if I can.”

McSweyn’s countryman Ryan Gregson ran a seasons best time to come second in what was a fantastic day for Australian athletes.

Laura Muir came agonisingly close to breaking Kelly Holmes’ British record and meeting record in the 1000m. Muir stopped the clock at 2:33.92 for the win – only 1.1 seconds slower than Holmes’ time set 23 years ago.

Muir said: “I’m happy with that despite the fact it was really windy, I just tried to give it my best shot but when I saw I was off the pace I knew it became about trying to just win the race and I did that.

“It was great to have a medal indoors and even better to add an outdoor one. The Europeans was always the big target and to deliver was really good and I’m happy with the season.”

Sifan Hassan demonstrated the versatility that makes her so difficult to beat by successfully stepping down to the 1500m so soon after her gold-medal-winning performance in the 5000m at the Europeans.

Hassan gave off a strong aura of superiority as she let the 2016 world indoor bronze medallist Gudaf Tsegay do most of the work for her before speeding past her as they entered the home straight and taking the victory in 4:00.60.

Assisted by Benjamin Kigen stumbling over the water jump at a crucial point during the last lap, Conseslus Kipruto took full advantage of his teammate’s misfortune, albeit reluctantly, as the African Champion eased to a winning time of 8:14.33 in the men’s 3000m steeplechase, while GB’s Zak Seddon finished 14th in 8:41.36 and Ieuan Thomas 15th in a time of 8:51.01.

There were two consecutive wins on the track for Kenyan athletes, as a comfortable win for Agnes Jebet Tirop in the women’s 3000m followed. She was the first of a trio of Kenyans to cross the line; finishing ahead of both Lilian Kasait Rengeruk and Hellen Obiri in a time of 8:32.21.

Eilish McColgan crossed the line in fourth place clocking a time of 8:38.49, while finishing fifth was Melissa Courtney in a Welsh record 8:39.20. Steph Twell complete the GB athletes in 11th running a time of 8:46.79.

Reece Prescod gave the home crowd plenty to cheer about in the men’s 100m – the last race of the day – as he showcased incredible acceleration to almost nullify Christian Coleman’s outstanding start.

After a photo finish, the spoils went to the world indoor champion Coleman and the time of 9.94 awarded to both of the athletes was a seasons best for the American and a personal best for Prescod, despite the slight headwind working against them.

Coleman said: “I felt pretty good. It was a sigh of relief because you never know what to expect when you come back from injury and I got my rhythm back and I came out with the win in a good time.

“I was looking forward to competing and the win is the icing on the cake. It’s been a test for me to continually prove myself but I’ll use this as a learning experience, now it’s about winning the Diamond League finals.”

Two explosive sprint races stacked with world-class talent provided a fitting conclusion to the afternoon, especially because Bahamian speed merchant and the world bronze medallist, Shaunae Miller-Uibo, ran an electric 22.15 that was the fourth meeting record of the day to fend off European triple gold medallist and home favourite, Dina Asher-Smith, in the dying moments of the women’s 200m.

Asher-Smith said: “I’m tired, but I am happy I was able to come out and perform in such a stacked field, full of girls who apart from me and Dafne [Schippers] have been resting up.

“It is really nice to perform well in their company and in front of a home crowd. It’s been a hectic week since Berlin so I am just looking forward to relaxing at home for a week or so before the next race in Zurich.”

One of the closest races of the day was the men’s 400m. Olympic triple jump champion Christian Taylor emerged as a surprise leader as the athletes entered the home straight before being eclipsed by the stampede of European gold medallist Matthew Hudson-Smith, Fred Kerley and Paul Dedewo.

Hudson-Smith, who grew up not too far from the Alexander Stadium, was roared on by the crowd but Kerley had the strength to beat him by mere hundredths in a time of 45.54.