An England debut to remember 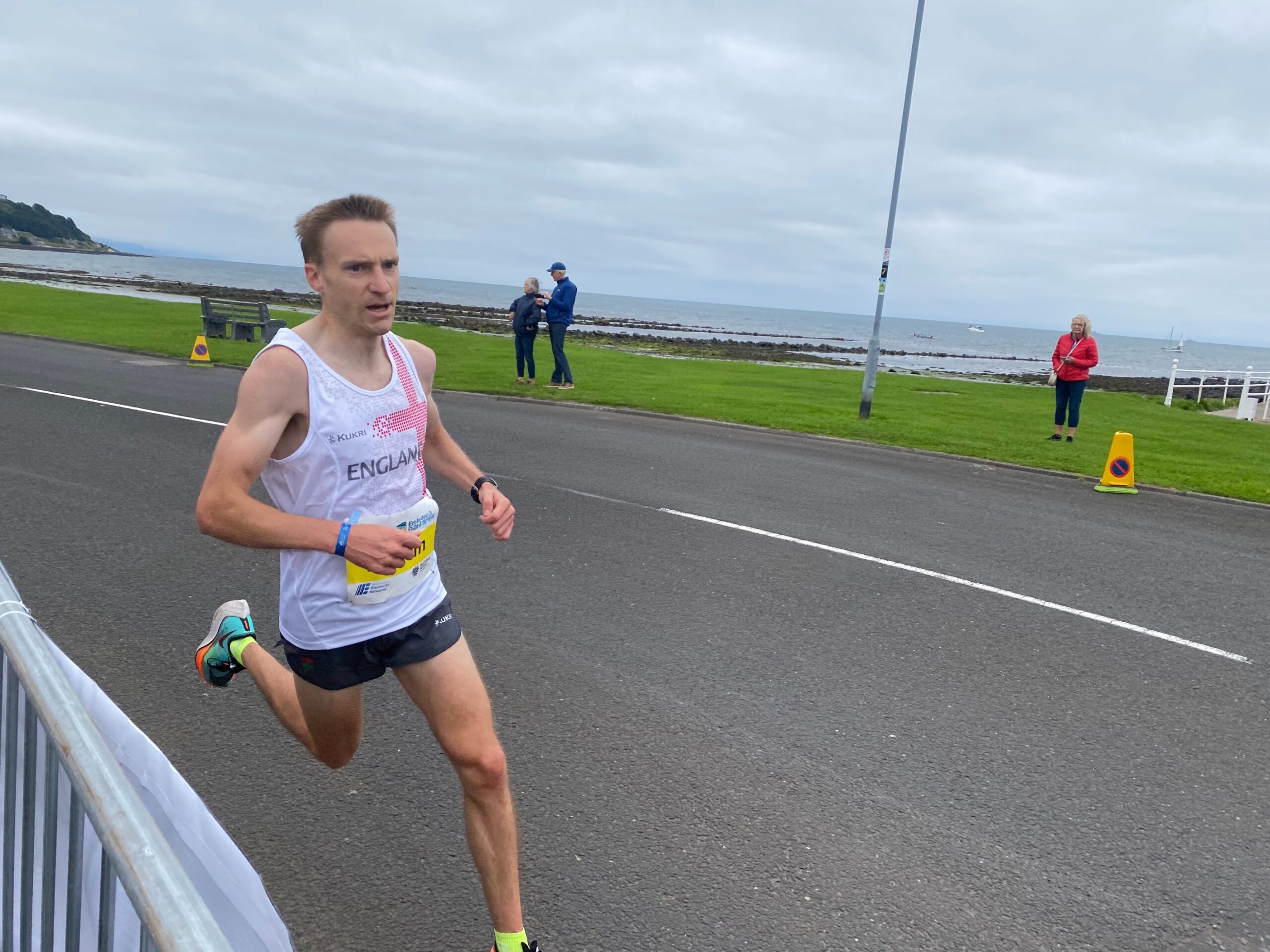 Nigel Martin takes us through the racing and build-up for his successful England Athletics debut at the Antrim Coast Half Marathon.

My debut for England and final race of my season was to be the Antrim Coast Half Marathon and after a really successful summer, I found myself in top shape and still improving. Paces in sessions did not get much faster, but my HR was getting consistently lower.

Two weeks prior to the race I went to the EA Marathon Training Weekend organised by Tom Craggs and we did lactate testing. The aim was to see how it varied around MP and whether it was in the target area of 2-2.5mmol/l at MP. Getting up towards 4 is meant to be the turn point, but basically generally the lower the better.

The last rep was at about HM pace. However, despite the high lactate, my HR was low. Even at the end of the last rep, it was still well within the tempo range, though it certainly didn’t feel like a tempo. The results were interesting, but I knew they were hardly definitive of what I could do in a race.

Don’t let the number dictate everything

It matches how I always feel in training. A few weeks prior I’d done Wrexham 10k, but I hadn’t tapered and I was using it as a training run; I ended up only running 30:30, but it felt hard. This turned out to be slower than my pace at Antrim. After taking an easy week and with race day adrenaline, my effort perception for a given pace is completely different than in training.

Of course, the effort perception is also linked to how the race is going and determines how I experience the race. If it’s going well, I’ll generally be suffering, but in a positive way, unlike when a race is going badly.

In the build-up to a race confidence can be a fickle thing. I completed my last pre-race training session on the Wednesday evening prior to the Sunday race and I felt as confident as I ever have. I knew I was in top shape and I felt mentally really ready for the race and actually I didn’t really want my season to end after the race.

I guess this is how it should be. However, in the space of 12 hours everything flipped. I did my usual taper session, but my legs were really stiff overnight and the next day. I did a recovery run in the morning and the muscles on the outside of both lower legs had a dull ache upon loading.

The only thing I could compare it to was the weak and dull feeling I had post marathon i.e., not at all where you want your legs to be 3 days before a big race! I tried to tell myself it was just my body in shutdown before the race, but it had me worried.

The course is quite unique. After an initial climb, the first mile is very quick, before then proceeding around Larne town, which is quite undulating, with miles 3-4 uphill. It then goes back to the Coast Road heading north to Ballygally and the turnaround.

The Coast Road itself is relatively flat. Similar to Armagh, the race really takes care of you with the provision of airport transfers, accommodation and meals. With everyone in the same place, it generates a real buzz.

After finally deciding on a getup time of 5am for an 8am start, I headed out soon after getting up and went for a shake-out. I think depending on when you do a shake-out, its purpose is slightly different.

If the race is later on, I’d do it at easy run pace for 20min. However, with a race start of 8am, this was not about getting an easy run in, it was not about warming up, it was about waking up. I walked then broke into nothing more than a shuffle at around 9-10min/mile – seriously, I covered 1.62k in 10 minutes!

There was that dull ache again and there was also a strong breeze, it was definitely not the still day that had been forecast. Nigel wasn’t the only person who had a good day at Antrim. Photo: Antrim Coast Half Marathon

In high company on the start-line

Prior to the race start we heard the top female, Yalemzerf Yehualaw, was going for not just a WR attempt, but for sub 64 minutes! She had 2 professional pacers and so the strategy was clear.

Stay with that group for the way out, then hammer it home if possible. I was aiming for sub-64, but ideally wanted closer to 63:30.

After my legs were seemingly switched out for a fresh pair, we set off in a big group, trying to stay out of her way as we definitely would not have been thanked for tripping her up! Her pacers did a great job of looking after her and keeping the pace nice and strong.

Can it feel too easy?

There were times that it felt too easy, but there was nothing to be gained by heading to the front. After being spoilt with hotel meals the past 2 days, I was actually more worried about feeling slightly sick from all the rich soups I’d had before each meal! I just wanted the initial part of the race to be over and to be heading back, the Coast Road really seemed to drag on.

“My mind was a reluctant passenger, but my body was getting the job done.”

Right near the turnaround two of the Irish team runners starting pushing on and I sensed this was the move to get the time I really wanted.

After letting things play out for a couple of minutes, I made a move to go with them and soon we were hammering it back. From 13k to the finish, every k was comfortably under 3 minutes and we were clawing our way back to 3:00/k pace (63:18). I’d not had too many bad patches up to this point, but there was no let-up in the pace on the way back and it was taking a lot of concentration to stay with them.

Stay focused and hang on for the ride

I managed to stay focused though and soon after 10 miles it was down to 2 of us. Around 12 miles I found myself getting dropped as we headed up the final rise, before a short sharp downhill and onto the promenade for the last 1400m or so.

I flew down the hill and caught back up, then soon there was a clear message from my brain to ‘go’. After briefly wondering why I’d not waited until later, as this was really starting to hurt, I started focusing on a big goal of mine – the club record.

According to my watch with a big last k it was possible and I really pushed hard to the finish, but after being bang on with the k markers my watch was measuring 70m long by the finish and as I rounded the final corner, I saw it was going to be just out of reach (only by 10s).

Still, a massive PB and whilst in many ways the race was perfect, there was a very big negative split with a final 10k of 29:29 (first 10k was 30:22), so maybe that club record can still be got. For now, I’m very happy and look forward to the autumn road races and winter XC!